You can’t really stream positions in dynasty leagues, but you might be making that tough call about which tight end you should start. @dynastydadmike makes it easy for you with his recommendations. 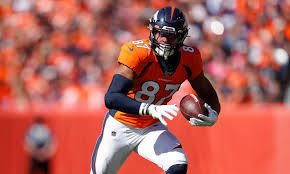 I will be tackling the Tight End position. Keep in mind this will not include the obvious starts of studs of Kelce, Engram, Kittle, and Hooper. If you got them, you are starting them if they are active. START YOUR STUDS!

What a Monday night football game! That was one of the best games I have seen. Unfortunately, it was bittersweet as it also contained a sit from my Week 10 article in Jacob Hollister. It looked like it was going to be a good call for me until the third quarter. I’m sorry guys and I hope you didn’t lose your matchup based on that call. Let’s recap the rest of my week because I did have some good calls. My starts: Gerald Everett (14.8), Kyle Rudolph (20.4), Mike Geisecki (4.8). I hope if you sat Hollister it was at least for Kyle Rudolph. My sits: Jimmy Graham (7.9), Jack Doyle (13.4), and Jacob Hollister (20.2). I’m going to consider my Week 10 a push as I went 3-3 with my calls. It’s getting close to the playoff push with bye weeks and injuries to Kittle, Engram, and Hooper, these next few weeks are pivotal.

Just like I stated last week, I do want to make a couple things clear though. First, this is not the time to get cute with your starts and these choices are streamer options with four teams on a bye and with the uncertainty of Evan Engram, Austin Hooper, and George Kittle. Second, this article publishes on Wednesdays or Thursdays so please keep up to date with the injury report and make sure players don’t show up on the report after the article is published.

It has been awhile since I have endorsed Jared Cook as a fantasy starter. However, he gets Tampa Bay who has been terrible against the tight end position. Tampa has allowed 6 touchdowns to the tight end position as well as four 20-point performances. Cook has also had three straight weeks of double-digit fantasy points and in his previous meeting against Tampa, Cook went 4-41 with a touchdown. If George Kittle does not play, Jared Cook has a very legitimate shot to end the week as your TE1.

If its broke don’t fix it. Everett was a start last week and continues to be a start this week. Everett has a great matchup against a Bears defense that has allowed double digit performances in each of their last 5 matchups as well as allowing double digit performances in 8 of their 10 matchups this year. Everett has double digit targets in 3 of his last 5 games. In a week with so many reliable tight ends either injured or on a bye, Everett should be firmly planted as a starter in Week 11.

Many felt that the biggest benefactor of Emmanuel Sanders being traded to the 49ers would be DeSean Hamilton. It however has been Noah Fant, who since the Sanders trade, is second on the team in targets behind only Courtland Sutton. Fant does have a tough matchup against Minnesota who has yet to allow a tight end to score a touchdown this season. Minnesota however has been more susceptible in recent weeks allowing double digit performances in each of the last two weeks. I suspect Fant to outproduce his TE18 rank in a matchup.

Gesecki was a start last week in my column and failed miserably in a favorable matchup. This week, Geisecki gets the #1 ranked defense against the tight end position which has also allowed only double-digit performance in 2 of their 9 matchups this year and only allowed one touchdown. In the first matchup against Buffalo, Geisecki was held to 8.1 points. I expect another single digit performance in Week 11.

Oh, how quickly things change in fantasy football. Rudolph goes from a start to a sit in a blink of an eye. Rudolph finished Week 10 as fantasy TE4 on the week with two touchdowns. However, I don’t expect similar production for Rudolph in Week 11 against a Denver defense that has allowed only 1 touchdown to a tight end this season. You are banking on a touchdown with Rudolph as he hasn’t had over 25 passing yards 8 of his ten games played this year. I would look elsewhere besides Rudolph if you need a tight end.

The OJ Howard breakout game finally came and fantasy fans are rejoicing. However, that also came against the worst ranked defense against the tight end position.  The Cardinals have allowed double digit fantasy points in 9 out of 10 games this year. That was also Howard’s first double-digit performance as well as first touchdown on the year and set a season high in targets. In their Week 5 matchup against New Orleans, Howard caught one ball for 10 yards and for his career against New Orleans, Howard has also only caught 4 career passes for 70 yards. I would fade Howard in Week 11.

Thanks for reading and don’t forget to him me up on twitter @dynastydadmike. I love to talk football and always love to interact with the fantasy football community. I also love to answer your other start/sit questions. Good luck in your fantasy football week 11 matchups as well as your season. Also, make sure you subscribe to the Nerd Herd where for 3 bucks a month, you get exclusive content, dynasty/rookie rankings, buy/sell tool, and a bonus podcast by @dynastyrich, @dynastyprice, and @dynastymatt. @Dynastynerds also launched The Dynasty Film Room, with college game tape of upcoming draft prospects which is huge in assisting you in your rookie drafts, which can only be accessed if you are nerd herd member. Go check it out. God Bless!