Struggling to find a replacement for Hooper, Kelce, or Henry? @dynastydadmike has some Week 12 options for you to help with your playoff push. 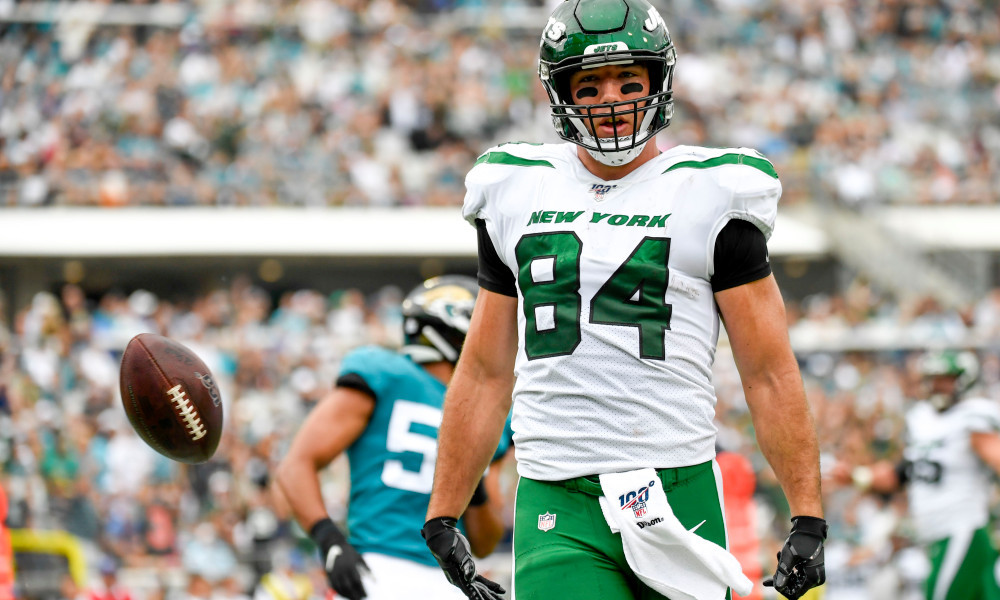 Week 11 is in the books and I hope your fantasy teams are still in the playoff hunt. Let’s recap my calls from Week 11 starting with my starts. Jared Cook came through for me with an 11.3 performance including a touchdown. My other two starts Noah Fant and Gerald Everett, however, fell short. Fant comes up just short of a double-digit performance with 9.3 but he did outproduce his TE18 rank. Gerald Everett was a huge disappointment with 3 points. I fared better on my sits which included Mike Geisecki (5.8) and OJ Howard with 0 points. I missed terribly on sitting Kyle Rudolph who finished with 17.7 points including his highest yardage total on the season with 67 receiving yards. I really do appreciate the positive feedback I have been receiving when I make bad and good calls. It’s great to be a part of the dynasty nerd’s community and shows why they have the #1 fan base. This is going to be another pivotal week with Kelce and Henry on byes and other studs Engram, Kittle, and Hooper all still nursing injuries.

Keep in mind this article publishes on Wednesdays or Thursdays so please keep up to date with the injury report and make sure players don’t show up on the report after the article is published.

Over the past 4 weeks, Griffin is second in fantasy points scored by the tight end position behind only Travis Kelce including 2 20-point performances. Griffin gets the Oakland Raiders who allow the 4th most fantasy points to the position including double-digit performances in 70% of their games played this year.  Griffin also should be in line for a touchdown as Oakland has given up 7 touchdowns to the tight end position. Griffin is my top option if you are a Kelce, Henry, or Hooper owner.

Over the past two weeks, no team has allowed more points to the tight end position than the Cincinnati Bengals. The Bengals are allowing an average of 30 points to the position as well as giving up 3 touchdowns during that time. On top of all that information, Pittsburgh is also dealing with injuries to James Conner, JuJu Smith-Shuster, and Diontae Johnson which puts Vance in a prime position to see an increased target share. Fantasy owners should monitor the injury report later in the week in regards to if some of these players suit up Sunday; it will lessen the shine of McDonald.

I do not understand the TE 17 ranking for Hollister. Maybe, it was due to Hollister having a bye week and people have just forgotten how good he was. He has had back to back 20 point performances. The Seahawks utilize the tight end heavily in their offense and Seattle Seahawk tight ends have accounted for 7 touchdowns on the year so far and 59 targets on the year.

Graham has only reached double-digit fantasy points once in his last 6 games. Graham now goes against the #2 defense against the tight end position. San Francisco has fared very well against tight ends by only allowing two double-digit performances as well as only two touchdowns all season. Graham continues to be a weekly stable on my sit list.

Fant has become a very solid option in the Denver passing attack. However, this has more to do with matchup than talent as Fant goes against the Buffalo Bills. Buffalo has allowed the fewest points to the tight end position. Buffalo has also yet to allow over 50 receiving yards in a game this year and has allowed a league-low 1 touchdown to the position. Fant owners should look elsewhere this week.

Indianapolis defense is playing the tight end position better than earlier in the season. The Colts have allowed just 1 double-digit performance over the past 5 games. It also appears that Wil Fuller is on track to play this week which will limit an already shrinking target share for Fells. You are banking on a touchdown this week if you decide to play Fells and I don’t see that happening.

Thanks for reading and don’t forget to hit me up on twitter @dynastydadmike. I love to talk football and always love to interact with the fantasy football community. I also love to answer your other start/sit questions. Good luck in your fantasy football week 12 matchups as well as your season. Also, make sure you subscribe to the Nerd Herd where for 3 bucks a month, you get exclusive content, dynasty/rookie rankings, buy/sell tool, and a bonus podcast by @dynastyrich, @dynastyprice, and @dynastymatt. @Dynastynerds also launched college game tape of upcoming draft prospects which is huge in assisting you in your rookie drafts which can only be accessed if you are nerd herd member. Go check it out. God Bless!