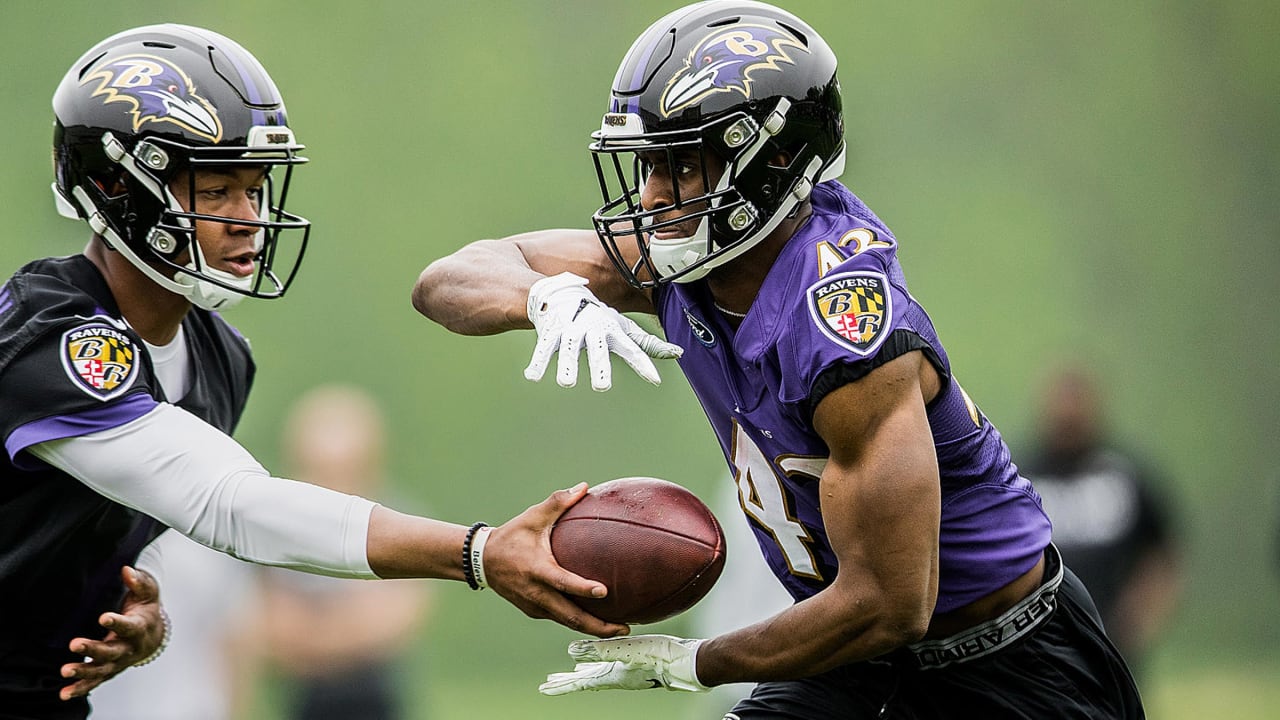 To follow on to the rookie WRs, we have some rookie running backs whose tape should give us some indication of what to do. These guys have additional factors affecting their production like the quality of the offensive line, crowded backfields, and game flow that affect each running back differently. Here is a high-level view of what I have seen on tape.

What’s not to like about Josh Jacobs? He has the opportunity and he is producing with it. Currently, he sits at 8th in carries, 5th in yards, tied for 6th in TDs, and 8th in YPC (among RBs with 40 or more attempts. On top of that Football Outsiders, O-line data has them as a top-10 run-blocking offensive line. PFF grades their lineman as having a top-8 center, a top-10 tackle, and a top-7 guard in run-blocking.

The best thing about Jacobs is that he is a downhill runner with burst. He shows some patience, but it is stable patience that lacks dancing behind the line. His 1-step acceleration is apparent and especially explosive when that offensive line opens up holes for him. When the holes are small, he combines vision with mental processing to take what is given to him by the defense. In the open field, he is like a nimble freight train that is able to elude/break tackles with subtle moves to be a little slippery, but he can smash people when they square up and finish forward with consistency.

If you got him keep him. If someone is selling him for a ‘20 first, buy him. I have a preference for the known versus the potential.

Owning Miles Sanders is surely a test of patience for those who drafted him. Looking at the numbers would surely disappoint you: 29th in carries, 36th in yards, no TDs. There is a lot of contexts to consider. Some of the obvious contexts includes the presence of Jordan Howard. People forget how good Howard is, but when you remember that it is easier to understand and accept that Sanders is going to take some time to become a productive fantasy asset. The Eagles are the 12th best o-line per Football Outsiders, and PFF run-blocking grades indicate they have Kelce (ranked 5th at center), a top-7 tackle in Lane Johnson, and two top-10 guards in Brooks and Vaitai (though he is not seeing the primary left guard snaps).

If you have depth at the position to be competitive this season or if you are already looking toward next season then Sanders must be considered a ‘buy’ if you can target the owner that is low on him. What has plagued him early on is his patience, not patience on a play-to-play basis, but patience from the perspective of an offensive series or the game.

There were many times in early games where he would dance a little to try and find a larger hole leading to some poor, inefficient decisions. This is partly because he knows he has the game-breaking ability and part because he is still adjusting to NFL speed. While this could be a worry for the impatient owner, there are two reasons for patient owners to be encouraged. First, Jordan Howard is there and he is a player Sanders can learn from with regard to maximizing the holes that are there. Since Howard doesn’t have the quickness/explosiveness of Sanders he is forced to make his production (currently 4.7 YPC) by making the most of what’s blocked. The second thing is, he is showing signs of improvement in every game, making more and more efficient decisions as a runner. He is showing his ability as a capable receiver as well which may be his niche as he works to slow down the game speed. Just hold and wait or buy and wait; he will be worth it down the road.

Montgomery should be more productive. It seems that this offensive line, ranked 24th overall in adjusted line yards, is the problem. The Bears don’t even have a single lineman ranked in the top-20 in run-blocking. While Montgomery has shown the vision and elusiveness that we saw in his college career, if there are no holes to be seen, what is he supposed to do? Because of his situation, he has only the 28th most rushing yards despite being 19th in attempts.

Talent is not the question for Montgomery. From a talent perspective and what he has shown on an NFL field, he should still be considered a top-3 RB in this class. This simply will not improve until the offense does. The return of Trubisky is a ways off, but his legs could help open up things for Montgomery in the trenches, but Trubisky also has to make the offense better but being more disciplined in the passing game. If the line could just give him a little bit of space to work, his elusiveness and contact balance are going to facilitate a lot of good runs for Montgomery.

If you decide to cash in on Montgomery make sure you are compensated for his talent. Selling just to get out and taking value based on his production would be a critical mistake. My recommendation is patience here to see his production if/when Trubisky is playing well.

Singletary is perhaps one of the most underrated in this class. Why is that? Part of it is Gore’s presence, part of it is he didn’t have ‘elite’ traits to his game. Singletary’s abilities are greater than the sum of the parts. He has an awesome run-blocking line to work behind as well. The Bills are ranked #3 overall by Football Outsiders with the 2nd-best grade in 2nd level yards. These linemen repeat the theme of being greater than the sum of their parts as none of their starting linemen are top-15 at their position according to PFF. The quality of this line is evident with Frank Gore producing in Singletary’s absence with the 12th most yards on the season.

Prior to his injury, Singletary was the most efficient running back in the league with 12.7 YPC. Sure he only has 10 carries, but the way he is getting them is what matters. The line is blocking well for him, but he is maximizing these runs with his vision and underrated elusiveness/agility/quickness that caught my eye earlier in the season. People have forgotten about him, and with forgetfulness of the masses comes an opportunity for the diligent. Singletary is a buy and he should be obtainable at little impact on our roster’s net worth.

Justice Hill’s contributions to the Raven’s and fantasy teams has been limited, and for good reason. Mark Ingram has been way more than we expected collectively, averaging 5 YPC with the 14th most carries, 10th most yards on the season, and tied for the 2nd most rushing TDs through week 5. Hill hasn’t seen more than 30% of the snaps; even Gus Edwards has seen more.

His play leaves a lot to be desired from a vision perspective, something that was evident to me in the draft process. He can kill it on outside zone by relying on his speed, but that seldom enough on its own against NFL-caliber defenses. He hasn’t been utilized in the passing game enough to be viable, and even then there are a few concerns. Receiving backs are commonly asked to adjust to off-target passes that get up on them quickly since passers commonly check down due to duress. This was seen only a few times, but it’s a definite concern in combination with the vision issues. The warts on his game along with the lack of opportunity warrant a downgrade in his ranking among 2019 rookie RBs

If Hill should be downgraded, who should be upgraded in the rankings? Mattison is one candidate for an upgrade because he has looked great in the limited carries he has received. It helps to be working behind an offensive line ranked 4th in ALY by Football Outsiders. It also can’t hurt that Cook has worn down the defense a bit before he sees the field. Mattison’s efficiency is ridiculous though having averaged less than 4.8 YPC only once so far this season.

His vision needs a little refining, but it will come as he develops the patience to his game to see and exploit cutback lanes. Once he does that, you have the absolute best backup RB in the league. His explosiveness and burst are very good, and if he ever gets the opportunity to carry the load he could dominate on the ground if his mental processing has caught up to the game speed to continue maximizing touches. The thing we don’t know yet is if he will be effective in the passing game if Cook were to miss time since he has only seen one target in his rookie season.

Pollard (deserving of a rankings upgrade) is another must-own handcuff like Mattison, but the likelihood that he sees the field in a primary role due to Zeke’s missing time is much lower than Mattison’s. With that said, he would be running behind one of the better run-blocking offensive lines in the league featuring two top-20 tackles and a top 15 guard (5th as a unit in ALY per Football Outsiders). What more could you ask for from a backup running back situation?

Pollard’s burst and vision are very good and it is interesting he didn’t get more attention during the pre-draft process. Pollard’s combine numbers undersell his on-field ability. Pollard shows a high level of mental processing in utilizing his blockers and watching plays develop. Zeke is very unlikely to miss time, but one has to wonder if it may be time for the Cowboys to consider integrating Pollard into the offensive game plan a bit more. He runs differently than Zeke does sure, but right now teams game plan for Zeke; opponents are likely not considering Pollard in their plans which could make him a really nice change-up for the offensive attack. Pollard’s value should be pretty low to everyone except the Zeke owner which should create an opportunity if you can spare the bench space.