Typically WRs take time to catch on, but surprisingly there are more relevant rookie WRs in this class than expected. 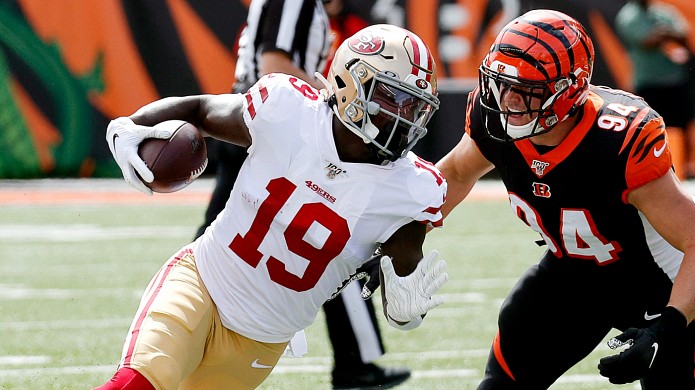 The edges in dynasty often come in identifying an upward trajectory before your league mates. There are a ton of tools, stats, and opinions that may encourage you to buy, sell, or hold these rookies, but really I hope you are all looking at the tape. If you aren’t looking at the tape, it is imperative to have the opinion of someone you trust available to you for players of interest to you.

With that said, I hope to earn your trust and as a starting point, we will take a look at some of the rookies. Most of the players we will look at will be those names we all knew going into the draft. There are a few others that have risen unexpectedly that have earned our attention. There are many more productive rookie receivers in this class than I would have imagined. Here is a synopsis of what I see in some of the most intriguing or productive assets.

His upside is amazing, but it doesn’t seem that the Shanahan offense will ever allow us to truly realize it with 85 passing attempts this season (league-low). The speed and quickness we all heard about pre-draft are legit and we are seeing it on the field; these traits suggest he plays faster than both his combine times in the 40 and 3-cone. He is going to separate consistently with an impressive snappiness in his breaks. Deebo adds to that with tenacity and competitive toughness with the ball in his hands that may not be rivaled by any other rookie in this class. The biggest question that came out on film was his competitive toughness in the process of the catch as he was unable to come down with passes in the middle of the field where contact was imminent.

A.J. Brown is an interesting player. His total usage is somewhat of a concern seeing around the same amount of snaps as Humphries, Sharpe. The fact that his efficiency with his snaps hasn’t earned him a stranglehold on the WR2 snaps opposite Corey Davis should be concerning for us. There are a lot of positives to his game like quickness and immediate acceleration off the line of scrimmage, play strength along with his hand moves in his release, play strength to maintain the ‘red line’, and he plays bigger than his 6’0” height might indicate. Qualities that are a turnoff include, struggles in consistently separating, inability to overcome DB’s leverage at the top of routes, quickness doesn’t translate to assist him in breaks for Digs and Outs. The lack of inclusion of Curls and Comebacks is also a concern for his total route-running ability. Pile on top of that, Tennessee’s 4th lowest passing volume and Brown is a ‘hold’ if you have him, but I would wait to see what happens if/when the passing volume rises.

There isn’t a whole lot to add to what was said in my earlier analysis of Brown. He is still a great player to have that has Tyreek Hill upside. What I mean by that is the rollercoaster nature of his performance from week-to-week, but it will really be tied to Lamar Jackson’s downfield accuracy. What has changed since the writing on Brown is his snap percentage which has more than doubled since week 1. If this isn’t an indicator to buy, I don’t know what is.

Part of an offense that is middling in pass volume that is still trying to determine the WR2 opposite, Hilton. It would be nice for Campbell to be the other half of the duo for obvious name reasons (may the Parris Hilton jokes ensue. I fear the novelty of that may fade quickly based on his usage. Campbell is 5th in WR snaps which is hardly encouraging. He shows some good qualities that should earn him more snaps. His speed is showing up on the field which is evident in some of the cushions he sees. Those cushions he either eats them up effectively or maximizes them on shorter in-breaking routes with his quickness in the breaks. He has quickness in his feet, good use of hands, and fluidity between his feet and his hands to defeat the jam. With good strong hands through contact and the ability to high point the ball with little need to gather before elevation, his upside is intriguing. One challenge in addition to the passing volume and his snap share is the trend of him seeing less red zone snaps than the other receivers. With him being more of a big play speed threat it somewhat makes sense, but this type of usage will keep him as more of a boom-bust type.

As one of the most hyped prospects due to his size/speed profile, the expectations for DK were crazy high. Then the draft came where he slipped to the second round triggering a significantly emotional response when Carroll drafted him. This specimen was meant to be a big-bodied deep threat that could bully most DBs. That has somewhat come to fruition with displays of his speed, confirming his ridiculous 40-time. He combines his ability to win deep with a very good ability to track the ball and come down with it even in situations where multiple DBs are right on him at the catch point. His acceleration allows him to close the cushion, re-accelerate quickly on double moves creating significant separation, and punish press DBs who fail on the jam.

The biggest concern has to be his route running. His overall quickness and agility are lacking which is evident in his breaks for any route that is not of the vertical variety. He has flashed an ability to run slants well (seen against Kirkpatrick) and if he can develop the quickness down the road, he could become a dominant player. He did seem to encounter some challenges against good physical corners. If they are able to jam him, his speed is not likely to manifest. He seems like a stiff player which is probably the biggest contributor to his agility and quickness challenges.

He is a buy at the right price. What is the right price? Whatever price you feel comfortable paying for a boom-bust player. Until he can develop in running some of those hard-breaking routes (Digs, Outs, Curls, Comebacks), his upside will be limited to big plays. Watch for development in these areas and pounce when the time is right.

Another receiver I wrote about earlier. His upside is insane and it is currently depressed due to the horrible organization and team that is currently the Redskins. Find a desperate owner who needs to make a move and acquire Scary Terry like you are doing them a favor after a few down weeks. He is a good deep threat and seems to be emerging as a dependable short/intermediate area target as well with his quickness and change of direction.

Speed, quickness, change of direction, are all very good. He doesn’t have the nuance to his game that Tyreek Hill has, but it is easy to see why some were calling him a Hill clone. He uses his quickness at the line of scrimmage in a similar fashion to Hill. Whiffing on a jam is certain doom for that DB. His ability in space after the catch is very encouraging as well. He will certainly produce on bubble screens and crossers with ease, and a free release better have a safety over the top of him. There are still some questions yet to be answered by his NFL sample, one of which is his ability to adjust to an off-target pass. Can he put on tape some evidence of his level of body control? As a smaller guy, his play strength lacks in breaking good form tackles which could limit the ceiling of yards after the catch.

This dude right here? He is leveling up, more than I expected. As soon as Big Ben went down, I among many immediately looked to James Washington as the beneficiary. What failed to factor into that assumption was Pittsburgh’s response to the situation. They want to protect Mason Rudolph as much as possible, and that means high percentage short – intermediate throws with a lot of running plays. Diontae has proven to be better in the short areas of the field. This is primarily due to good quickness and sharp lay-up in-breaking routes for Mason to read quickly. Some have already bought because of those big touchdown catches in back-to-back weeks. This is the wrong reason to buy him since both of those plays came from serious breakdowns in coverage where he was wide open. He is still a ‘buy’ because of how the Steelers are consistently using him which should help his production in PPR leagues.