Will it be a new city with the same old Melvin Gordon? Or will we see something different in 2020 and beyond? Read and see what I think of Melvin Gordon in his newfound home. 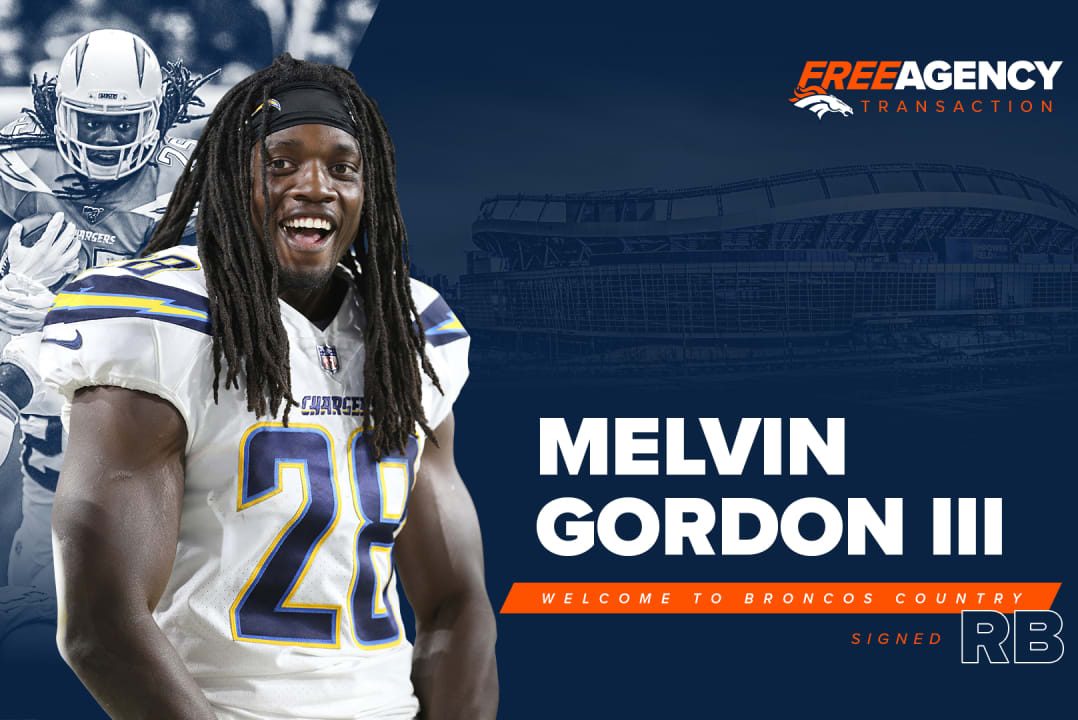 Seemingly every RB held out last year, including the topic of today’s article, Melvin Gordon. That may or may not be an over-exaggeration, regardless Gordon held out. It was one odd season for Gordon with the Los Angeles Chargers as he held out through OTA and training camp. Leading into the season, despite all the rumors circling, Gordon continued his hold out and wound up missing the first four games of the year. When he returned, he never seemed to regain the grip he once had on the Chargers backfield. While Gordon was on “vacation,” Ekeler shred opponents on the ground and through the air. So, when Gordon did return in week five, it became a committee.

He managed to piece together an RB21 performance in PPR scoring formats, but it was on the back of nine total TD’s (eight rushing, one receiving). Gordon got 162 carries and turned it into 612 yards rushing (3.78 YPC), and had 42 receptions on 55 targets, leading to 296 yards receiving. Even though he missed four games and fought Ekeler for touches, he was still a valuable asset for your fantasy team.

That leads me to his new team, the Denver Broncos; they gave Melvin Gordon a new two-year, $16 million contract. Before the NFL Draft, the situation was a bit murky with the options the Broncos already had in the backfield. The most damaging player to Gordon’s value is easily the undrafted Phillip Lindsay, who took a step back in year two following his stellar rookie season. After the NFL Draft, however, the situation grew even murkier than before. Gordon is no longer just competing with Lindsay, but now he as rookie WR’s Jerry Jeudy and KJ Hamler coming in to take away whatever targets we thought might come his way. There are plenty of negatives concerning Gordon’s workload in Denver. However, there are positive signs that point to Melvin Gordon still being a stud for someone’s dynasty fantasy football teams.

Seriously, what’s the likelihood that one RB will be sniped by two different undrafted RB’s on two different teams? I would have never thought it possible before meeting Melvin Gordon. If there were ever to be an Ekeler 2.0, it would be Lindsay. However, I love saying that money talks; in this case, the money says Melvin Gordon is the starter. With his new contract, the Broncos made a statement that they want weapons for QB Drew Lock and that what they had wasn’t good enough.

Put the money aside for a second, though, and let’s assume that the Broncos do what they did last year. They featured two guys in their running attack, Phillip Lindsay and Royce Freeman. Lindsay received 224 carries, while Freeman received 132 carries. In the passing game, Freeman got 50 targets, while Lindsay got 48. Hypothetically, if that happens again, Gordon would be receiving a bulk of the carries, and that doesn’t spell doom folks. Last year, with only 162 carries and 55 targets, Gordon finished as top 24 RB. So, if a couple of targets disappear and he receives 60+ extra carries, is that a negative? I think not.

While that’s great, we could see something different from the Broncos offense this year with the new OC Pat Shurmur entering town. Looking back to his years with the New York Giants, Minnesota Vikings, and the Philadelphia Eagles, Shurmur has hardly, if ever, taken a committee approach. I’m going to leave off his tenure with the Vikings in 2016 and 2017 as he suffered injuries at the position both years.

Let’s start with Shurmur’s time spent with the Eagles. It was a short tenure that lasted from 2013-2015 and ended with him as the interim HC after the Spread God, HC Chip Kelly, got fired. In 2013 and 2014, the Eagles had one feature back, LeSean McCoy, take over 300+ carries; Following those years, things got a little unusual. In 2015, three different RB’s absorbed a significant workload, Ryan Matthews, DeMarco Murray, and Darren Sproles. It became clear early into 2015 that neither Murray or Matthews could take on that entire workload, and both fought injuries throughout the whole year in 2015. This data illustrates that when Shurmur has a back that can handle a large workload, he will give him a large workload. That’s a positive for Gordon.

In his short stint as the Giants HC in 2018 and 2019, Shurmur gave RB Saquan Barkley all he could take. He rarely pulled him off the field. In 2018, Saquan received over 300+ touches with the next closest RB having only 65. However, 2019 was a little different as Saquan suffered an ankle sprain in the middle of the season. Thus, the touches spread out a little more then they would’ve been had Saquan remained healthy.

After reviewing all this, and knowing where their money is going, I expect to see the Broncos give Gordon all he can handle. Shurmur has worked with some stellar names at the RB position and has given all of them a large workload. Gordon is not as talented as backs like McCoy or Barkley. However, he’s also not Matthews or Murray.

The only years where Shurmur has used a committee have been when his hand was forced to do so by injuries. The single year where you could make a case that there would’ve been a committee regardless of injury would have been 2015 with the Eagles. However, both Murray and Matthews were coming off years where they were the lead go, so either one of them could’ve taken over the lead back responsibilities if they stayed somewhat healthy. Up to this point in his career, Gordon has stayed healthy and hasn’t fought any nagging injuries. Assuming that remains true, I expect Gordon to assume a large portion of the touches given to RB’s.

The Broncos have come a long way this offseason. A clear goal by the brass was to surround Drew Lock with more weapons. They already had developing young stars like Noah Fant at TE and Courtland Sutton at WR. At RB, they only had Lindsay and Freeman, who was a third-round pick just a few years back. This offseason, they went out and drafted guys like Jeudy in the first round and Hamler in the second round. Now, add in the acquisition of Gordon in free agency, and they’ve accomplished their goal. But, what does that mean for Gordon, exactly?

As we talked about, I fully expect Gordon to receive most of the work in that backfield as we witness Lindsay slowly fade out of the picture. In week 13, Drew Lock assumed the role of starting QB for the Broncos. Over that time, the Broncos averaged 31.75 carries per game, which would’ve ranked second behind only the Baltimore Ravens, if that trend continues for an entire season. As far as the pass-catching work, last year, the RB position received more than 90 targets in Denver. When Lock took over, the RB position received an average of 6 targets per game, which would’ve amounted to 96 targets given to the RB throughout an entire 16-game season with Lock under center.

Yet, there is still some reason for hesitation regarding those numbers. Firstly, Shurmur is now the new OC, which was mentioned above. Secondly, there are a lot of new weapons. So, will those trends continue? Since Shurmur has featured an RB with over 250+ carries per season three times in the past six years, it’s safe to assume the rushing total will remain the same. Not to mention, in 2018, when Saquan was healthy for a full 16-game season, he received more than 100 targets. Yes, it is indeed a new OC than last year, but he still loves to do the same things the Broncos did last year.

Before I wrote this piece, I believed Gordon would take a big step back in Denver and that he and Lindsay would decimate dynasty teams across the world, but I thought it was wrong. The writing is on the wall, and Melvin Gordon will be the feature RB for the Broncos in 2020 and possibly longer. I hate saying that because I love Phillip Lindsay, and he is a great guy to root for, but the writing is on the wall. The money says it will be Gordon, and the new OC has a desire to feature one guy heavily.

Unless an injury occurs to Gordon, Lindsay will have minimal value in 2020. Yet, he’s still someone I would roster as he would be a top tier handcuff. In 2020, Gordon will be a borderline RB1 in PPR scoring formats, but it may be time to get out while you can after that. He is a 27-year-old RB, on his second contract, and only has two years on his deal.

🆕 Is Brock Vandagriff the next big thing? @rickyvalero_ breaks down why he think he may be inside
https://www.dynastynerds.com/devy-player-profiles-brock-vandagriff-quarterback/

🆕 Louisiana-Monroe RB Josh Johnson presents an interesting prospect in the upcoming NFL draft. @ReflipeWThenuz breaks down the player and his stock.
https://www.dynastynerds.com/2021-rookie-profile-josh-johnson/