Several players realized their potential in 2019, but none were more impressive then WR DJ Chark. With the cloud over his QB situation dissolved, at least for 2020, what can we expect from Chark moving forward? 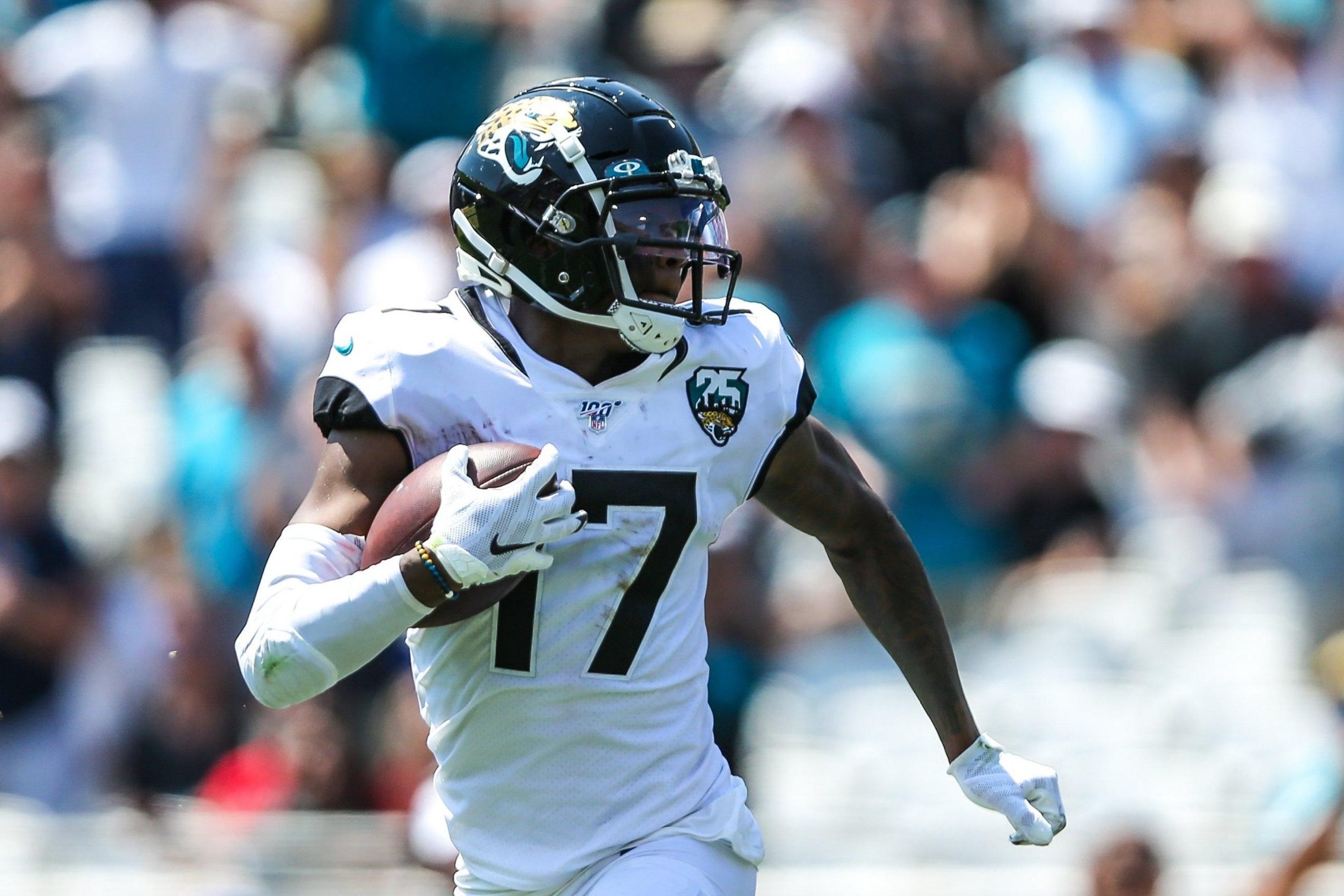 2019 was the year of the WR breakout as several second-year WR’s broke onto the scene. That includes the topic of this week’s 20 Projections for 2020, DJ Chark. Drafted in the second round of the 2018 NFL Draft by the Jacksonville Jaguars, Chark had a rough rookie year. He struggled to get on the field and missed some time due to injury. However, he put that abysmal showing behind him, and the Jaguars made it a point to get him on the field more last season. That led to Chark finishing as the 17th WR overall in PPR scoring formats. To be more specific, he registered 73 catches for 1,008 receiving yards and 8 TD’s on 118 targets.

Following that breakout year, you would seem to think that Chark would be a name beloved by most of the dynasty community, but that isn’t the case. Initially, I was planning on writing about Phillip Lindsay; however, everywhere I turn, I find people disparaging Chark and his breakout season. The basis for disparaging Chark ranges from his inconsistency last year to a change in play callers heading into 2020. At first, I understood their hesitancy to buy into Chark. Still, after doing some research, I realized that there’s no reason to not buy into him.

Now, this concern is certainly valid as Chark was inconsistent. He only recorded three games of over 100 yards receiving, and also had five of his 8 TD’s in those weeks. He also had six games where he didn’t top 50 yards receiving. So, yes, he was very inconsistent, but I think it was mostly due to who was under center. Let’s take a look at who was starting at QB for Chark and the Jaguars.

His Time with Nick Foles

Heading into 2019, the Jaguars paid up to Nick Foles in free agency and believe that he would be their starter for the foreseeable future. Well, in week one, that dream came crashing down. Against the Kansas City Chiefs, Foles was injured and wouldn’t return until week 11, leading to Gardner Minshew starting while Foles was out. When he did return, Foles played terribly and permanently lost his job in week 13 to Minshew.

When factoring that he didn’t attempt more than 15 passes in two of his four starts, weeks one and 13, Chark didn’t have a lot of playing time with Foles. In the two weeks were Foles played the whole game, the results were drastically different. In week 11, Chark had eight receptions for 104 yards and two TD’s, while he only had five receptions for 38 yards in week 12. Considering he barely played with Foles, you can understand the inconsistencies. A QB, WR relationship is based on excellent communication and a level of understanding that can only be built through many reps.

Chark’s time with Minshew, however, was a larger sample size. Last year was Minshew’s first in the NFL as he was a sixth-round pick in the 2019 NFL draft. At the time, the Jaguars expected him to be a backup QB behind Foles, but that wasn’t the case by year’s end. Minshew played in 14 total games and started in 12 of those. With Minshew under center, Chark was very boom or bust but still managed to be a WR2 for fantasy.

To finish as a WR2 with a rookie QB, let alone a sixth-round rookie is an incredible feat. To help illustrate that, I went on the prowl. I found an article from the Fantasy Footballers writer, Kyle Borgognoni (@kyle_borg, on twitter) from July 5, 2018. Borgognoni went through all the rookie QB’s from 2004 to 2017 and highlighted 53 QB’s that were either first-round picks or played in six or more games. The results were astonishing. The original article is linked below.

Even though he was inconsistent, Chark still finished as a top 24 WR, and, as you can see above, the odds were stacked against him. Regardless, it is something to keep an eye on next year to see if that is a trend that continues. However, I don’t see that being the case. Minshew was also inconsistent at the QB position last year for fantasy, which leads me to believe that’s why Chark was so inconsistent. With more games under his belt, I expect Minshew to be more consistent. Thus Chark would be as well.

Looking towards the future, one thing that must be brought up regarding Chark’s future is the change at Offensive Coordinator. The Jaguars decided to move on from OC John DeFilippo and hire ex-Washington Redskins Head Coach Jay Gruden at OC. His west coast scheme plays to Chark’s ability after the catch as a runner with blazing speed. However, the concern isn’t with how he will fit in Gruden’s scheme, but if he’ll get enough volume transitioning away from DeFilippo’s pass-happy offense. No matter where DeFilippo has been, one thing remains constant: a high passing volume. Last year, the Jaguars threw the ball 589 times, and that was with a rookie QB playing in 14 of 16 games. To put that into context, the table below highlights where the Jaguar’s total pass attempts would have ranked among Quarterbacks with the highest amount of attempts last season.

Where Does That Leave DJ Chark?

After seeing that, one would assume that, yes, a lack of passing volume could be an issue for Chark. It’s hard to beat DeFilippo’s love for passing the ball, but I wasn’t ready to concede. I wanted to dive deeper into Gruden’s numbers with Washington, so that’s what I did. The results I found are illustrated below and highlight all the guys who received more than 90 targets. You’ll notice that I left out 2019 and only provided the results from 2014-18, that’s because Gruden was fired by Washington mid-season.

As you can see in almost every year, but one (2018), Gruden has had at least one receiver get more than 100 targets; there were also a few seasons where he had two guys fit that criteria. Even though his offense may not be centered around the passing game as much as others, he always seems to feed his top guys the ball, and that is excellent news for a guy like Chark.

Unless you were living under a rock last season, Chark undoubtedly took over as the number one option previous year. That means you can most certainly pencil him I for more than 100 targets. Another interesting thing worth noting is that the Jaguars don’t have a clear number two option. It could be a laundry list of guys ranging from the newly minted second-round pick WR Laviska Shenault or RB Leonard Fournette. There’s potential for even more opportunity to head Chark’s way.

I’m not concerned about Chark by any means. While his breakout wasn’t perfect last season, he did something few WR’s can do, and that’s producing with a rookie QB at the helm for close to 90% of the season. Let’s also not forget that he is only 23 years old and is entering just his third season in the NFL. He is a valuable asset for your dynasty teams. After last year the QB situation is sort-of null and void when it pertains to his value. While it will undoubtedly hurt him, he will still be able to produce. That gives him a lovely floor going into every season, unlike Juju Smith-Schuster.

However, I do think Chark has a ceiling. I don’t see him developing into a perennial WR1 in dynasty, but more of a high to mid-end WR2, and that’s not a bad thing. After all, there are only 12 of those WR1 guys every year. Please don’t read what I’m not saying, he can and probably will have a year, or two were he finishes in the top 12 at his position for fantasy, but that will not be the norm.

Top 5 Superflex QB’s Under 25
Don’t Give Up On Corey Davis!