After being dealt in a trade by the Miami Dolphins last year mid-season, Kenyan Drake landed with the Arizona Cardinals and took over the top RB spot almost immediately. In that short time, Kenyan Drake burst onto the scene. Can he continue that success moving forward? 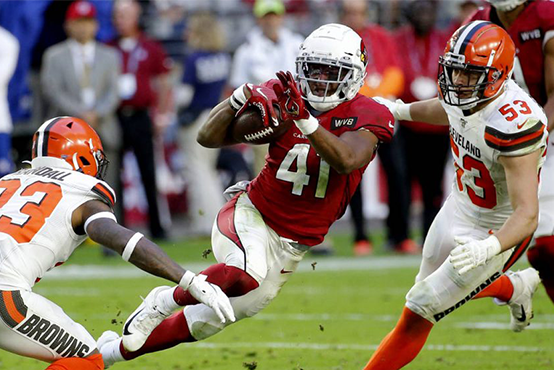 After enduring years of torment with the Miami Dolphins, RB Kenyan Drake finally got shipped out of town. He was traded to the Arizona Cardinals mid-season, and immediately, things started looking up. Drake had good players surrounding him at his position with RB’s Chase Edmonds and David Johnson, but that didn’t matter. Drake shined, and it didn’t go unnoticed. His new HC Kliff Kingsbury instantly plugged Drake into the starting lineup, and he never relinquished it.

This offseason, the Cardinals reinforced their belief in Drake’s abilities. They traded away David Johnson to the Texans and placed a transition tag on Drake. Granted, the transition tag highlights their want to feature him heavily in 2020, and it leaves his dynasty outlook with the Cardinals up in the air. However, over the offseason, all reports are that the Cardinals intend to work out a long-term contract with Drake. I’d venture to say it will get done, and that Drake will be with the Cardinals over the next few years. However, it’s still concerning long term, but that doesn’t change what Drake will do in 2020.

Several things give me the belief that Kenyan Drake will be a top 12 RB in PPR formats going into 2020. The first one being the decline in utilization of the other RB’s on the depth chart, while the second one is the change in priorities on the offensive end for the Cardinals. Both intertwine with each other and show that Drake is about to eat.

A Year in Review:

To honestly evaluate Drake’s season last year, you have to look beyond his end of season numbers. That’s because he spent half his season with the Miami Dolphins. When he was with the Cardinals from weeks 9-17, Drake was on a 16-game pace of 246 carries, and 1,286 yards on the ground. In the passing game, he was on pace for 70 targets, 56 receptions, and 342 receiving yards. As far as TDs are concerned, Drake would’ve reached at least 16 total. Besides just looking at his end of year stats, there’s another way to evaluate his season. That’s by looking at the drop-off in the other RB’s involvement as he continued to get settled in.

From weeks one through eight, the RB’s featured on the Cardinals were Johnson and Edmonds. Before Drake’s late arrival, Johnson and Edmonds averaged a combined 22.1 touches per game. In most of those games, Johnson was the featured back. He registered over 70 carriers and over 40 targets with Edmonds spelling him every so often. When Drake arrived, he averaged 18.8 touches per game in the final eight weeks of the season. Johnson averaged 3.8 touches per game over that same time frame, but also missed two games. Edmonds became an afterthought as he only played in five of the eight final games due to injury. Even when he was healthy, he only received two carries and had zero receptions.

As soon as the Cardinals acquired Drake, he became “THE” guy, while the other two RB’s were pushed aside. With Johnson now out of the picture, a few more carries and targets are available and could go to either Drake or Edmonds. Given the split that took place earlier in 2019, I expect a lot of Johnson’s touches to go Edmonds way. Still, Drake will receive the same amount of work he received at the end of last year, with the slim possibility of earning more.

In one of the earlier editions of 20 Projections for 2020, I wrote about Drake’s QB, Kyler Murray. One of my key takeaways from that was the shift in priorities on the offense in the final three games. In the first five weeks, Drake was on the Cardinals (weeks 9-14), he only topped 15 carries one time. However, he had five or more targets on three separate occasions. In that same time frame, Kyler Murray topped 30 pass attempts three times. Also worth noting is that the Cardinals lost every game during those five weeks. So, you can see the clear focus of the offense was passing the football. However, they altered their mindset in week 15.

In the final three games of the season (weeks 15-17), Drake topped 20 carries twice after falling to do so prior to the Cardinals; it was a successful change as the Cardinals won both of those games. A notable downside to the shift in priorities by the Cardinal’s was the drop-off in pass-catching work. Kyler Murray failed to top 30 pass attempts in all but one of those games, which meant Drake didn’t receive more than five targets in any of those three games. The change was a positive one for Drake; what he lost in pass-catching work was gained in carries.

That is something that will stick as Drake not only performed at a high level with the rushing workload, but the team won games. Am I expecting Drake to top 20 carries every game in 2020? Absolutely not. Expecting that type of workload from anyone outside the elite caliber of RB’s is asinine, but 15+ is more than feasible and gives him an excellent baseline of production.

I hinted at it earlier, but Drake is going to be a top 12 RB in PPR scoring formats. Drake is going to receive the work of a guy in that caliber, so it’s all about what he can do with it. As we saw last year, he can produce with that workload. He is someone that I classify as a steal in startup drafts. His average draft position is currently in the middle of the fourth round, which is absurd. A player with the potential to be an RB1 with the floor of an RB2 is rarely found in the fourth round of dynasty startups. That makes him an incredible value. I would also recommend going out and trading for Drake if you’re a contending team who needs RB help.

As far as Drake’s dynasty outlook goes, after this year, it’s sort of up in the air. If he doesn’t return to Arizona, things could get a little gloomy, and he’ll lose the floor that comes with being the lead guy for the Cardinals. Again, I don’t expect it, but it’s certainly possible. The Cardinals scheme is perfect for Drake, and you don’t want to see him leave. Even if that were to happen, I would still expect good production from him over the next few years after 2020. However, he’d most likely lose that RB1 ceiling he currently has.

How to Trade for a Quarterback in Superflex Leagues
IDP Value in an Offensive World, Pt. 2