Many thought that RB Miles Sanders would’ve entered his rookie season as the feature back, but that simply wasn’t the case. However, as the year progressed, things seemed to turn around in a big way. Now, Sanders has people thinking he could be on the verge of a major breakout in 2020 and beyond. 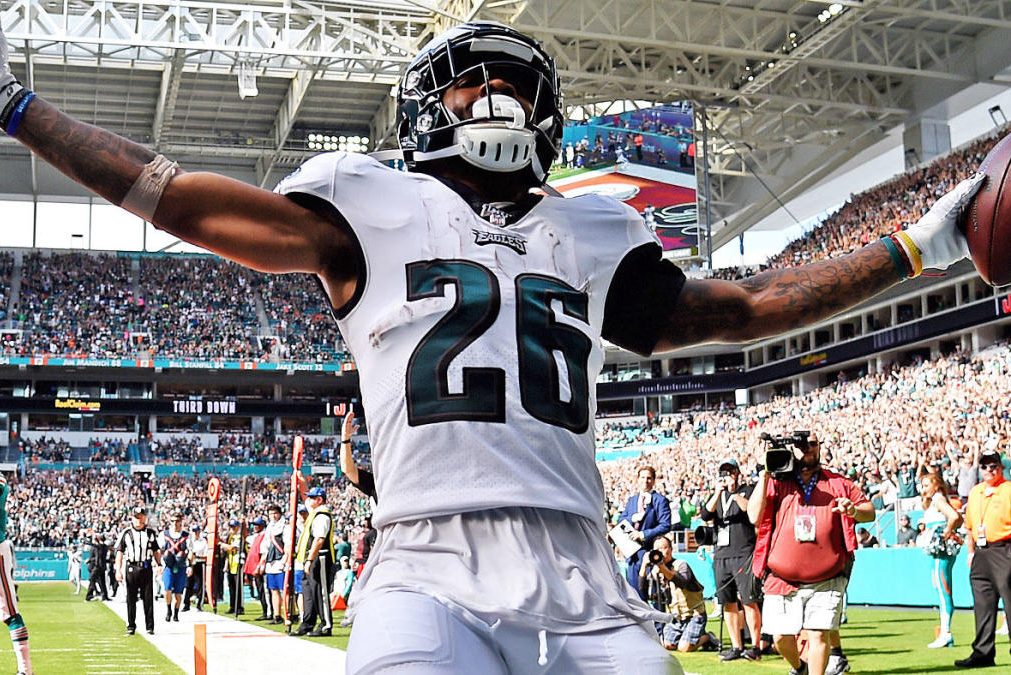 The 2019 NFL Draft didn’t feature a lot of prominent rookie RBs. However, there were still a few names that deserved a lot of attention, and one of those guys was Miles Sanders. Entering last year, his rookie season, many thought HC Doug Pederson would transition away from the RBBC (Running Back By Committee) approach, but he didn’t. That caused Miles Sanders to open up his 2019 season as one helluva disappoint to fantasy owners, but he finished strong and tallied over 1300 total yards and six total TDs.

There are some concerns I need to address about Sanders that still puzzle me. The first concern is about Sanders and the second half display he put on. Maybe, it’s less about the run itself and more about its perception by fans and analysts. Either way, that supposed “excellent” showing brings up more questions than answers. Another thing I’m still puzzled about is the Pederson’s track record of RB usage that once again reared its ugly head last season.

I thought that my research on Sanders would give me a strong idea about what he’ll do with the Eagles short-term and long-term. However, instead of finding the answers I was looking for, I have more concerns and more questions. It has been one of the more annoying results in this series of projections I’ve done. Without further ado, here is what I think about Miles Sanders and his future with the Eagles.

A so-called Breakout and the Truth Behind It

At the halfway point of the 2019 season, one of, if not, the most significant bust candidates, was Sanders. A few people predicted a slow start, but for the most part, others were expecting him to come out of the gates strong. Then, after an injury to Jordan Howard in week nine, Sanders exploded. But did he?

Over the offseason, no one singular player has received more hype than Sanders. One of the biggest reasons that the hype has been so high surrounding him is his fantasy PPG over the last half of the season. To be more specific, they look from week 13 on. Admittedly, it is impressive at a glance as Sanders PPG in PPR formats from week 13 on was 15.8. That stat, however, is incredibly deceiving. That stretch features three games where Sanders exploded, but he also had two games where he failed to top seven points.

As previously stated, Howard went down with an injury in week nine. After that, nothing else changed in the Eagles backfield. Starting your analysis at week 13 doesn’t paint a full picture of what happened after Howard got hurt. Here’s what happened with Sanders after week nine:

What Does That Mean For Sanders?

Following the injury to Howard, Sanders’ involvement in the passing game increased, but his rushing usage was still sporadic. Tossing in the four weeks before his “dominant” stretch from week 13 on changes the narrative for Sanders. Yes, he had some weeks were he performed great, but there was a lot of inconsistency there. There weren’t just inconsistencies with his workload, but there were also inconsistencies with his effectiveness. Rather than making me think Sanders is on the verge of a significant breakout, this stretch leaves me with more questions. With Howard gone permanently now, will Sanders receive the work needed for a top 16-20 RB? Will he consistently be productive with whatever work he gets?

That doesn’t mean that I dislike Sanders. I like him and believe he is a talented RB. However, these are just questions that you can’t ignore or simply gloss over. They leave severe doubts about whether or not Sanders can be a consistent RB2 in any format in 2020. Long-term, it has me doubting whether Pederson will ever trust Sanders enough to give him a large workload, which brings me to my next point of concern.

The History of HC Doug Pederson

Pederson has been on a meteoric rise as a coach since his playing days ended in 2004. In 2005, he started his coaching career with Calvary Baptist Academy, which is a High School located in Louisiana. Then, in 2009, he started his NFL coaching career as the Offensive Quality Control Coordinator, but that only lasted for two years. In 2011, he became the Eagles QB coach under Andy Reid. When Reid was fired, Pederson abandoned town and became the Kansas City Chiefs OC from 2013-2015. Then, in 2016, he took over as the Eagles HC, where he currently resides.

In his short time as a play-caller, specific trends have followed him. One of those trends is that he consistently loves to employ an RBBC rather than have one player receiving a majority of the backfield’s touches. To see how true that is, I wanted to dive into Pederson’s time as a play-caller in the NFL. I looked at his time with the Chiefs as the OC from 2013-2015 and his time as the Eagles HC (2016-present).

With the Chiefs in 2013, there wasn’t much of an RBBC going on. It was solely the Jamaal Charles show as he received 259 carries and over 100 targets, but backup RB Knile Davis also received 70 carries. Alex Smith, the Chiefs QB at the time, was second on the team in carries with 74. Also, RB Dexter McCluster got over 80 targets that year.

Now in 2014, things were a little different in KC. Charles still led the team with over 200 carries and over 50 targets, but RB Knile Davis wasn’t far behind with 134 carries and almost 30 targets. The gap closed a little, but you can still see a significant difference between the starter and the backups.

Then came 2015, where Pederson had to truly employ an RBBC due to an injury to Charles 5 weeks into the season. In total, four RB’s accounted for over 70 carries a piece (including Charles). A lot of that may have been due to injury, as Spencer Ware also got hurt. That year Ware entered the season as the team’s primary backup. Regardless, it still shows that Pederson can and will use an RBBC.

Let’s transition to his time with the Eagles were a trend starts to form. In his first season with the Eagles (2016), three different RB’s accounted for over 70 carries apiece. Only one surpassed 15 targets, and that was Darren Sproles as he got 71 targets. That is now the second year in a row where Pederson used an RBBC to divvy up the touches in his backfield.

In 2017, the Eagles once again had three different RBs receiving at least 70 or more carries. However, this time, none of them received more than 20 targets. Now, this has become a full-blown trend, and something Pederson is looking to do as opposed to having one guy do all the heavy lifting.

In 2018, the Eagles had three RB’s nearly eclipsing 70 carries as Wendell Smallwood finished with 68 that year. However, midway through the season, the Eagles acquired RB Jay Ajayi from the Miami Dolphins and featured him heavily in four games as he had 45 carries with them. This time the highest amount of targets for an RB was only 35. Here you notice a scary trend is starting to develop, and that’s the lack of pass-catching volume for RB’s in Pederson’s system. Again, another thing that should concern Sanders’s owners.

That brings us to 2019, also known as Sander’s rookie year. The Eagles had two RBs over 70 carries and had another one that received 61 carries. Sanders led the team in carries last year, and had 63 targets, while no other RBs received more than 26. Last year bucked the trend of the RBs lack of involvement in the passing game. The Eagles lost every pass catcher for at least one game due to injury, except for WR JJ Arcega-Whiteside. It’s possible that, if not for those injuries, that trend may have continued.

There’s a lot to unpack here with Miles Sanders, but one thing is for sure, nothing is guaranteed for Sanders. I honestly have no idea what to expect from Sanders in 2020. Even his long-term value is up in the air for me. However, there is one thing I know: Pederson hasn’t had a back with as much talent as Sanders since his years in Kansas City, where he got to work with Jamaal Charles.

If you’re a Sanders owner, the hope is that Pederson uses him 75% as much as he used Charles in Kansas City, but I don’t know how feasible that is. It seems that Pederson is content with using an RBBC. When it comes to the pass-catching work, the two years where RBs were hardly involved in the passing game was odd. Those years featured RBs like Legarrette Blount and Ajayi, who are known to have horrible hands.

I expect Sanders to be involved in the passing game, but I still think his carry count will be inconsistent from game to game. Sanders should eclipse 150 carries this year and get 60+ targets once again. As far as his fantasy finish in 2020, I view him as a lower-end RB2, high-end RB3. However, he will offer RB1 upside week-to-week. Sanders will be a boom-or-bust fantasy option next year. That is also where I expect him to be for much of his career. If you find someone who values him as an up-and-coming RB1, sell Sanders and don’t look back.