Last offseason, Chicago Bears rookie RB David Montgomery stole the hearts of dynasty owners across the world. However, just as quickly as he stole their hearts, he broke them. His 2019 season was a letdown, and now his future is looking grim. Will he rise above the concerns and perform in 2019 and beyond? Or will he continue to let fantasy owners down? 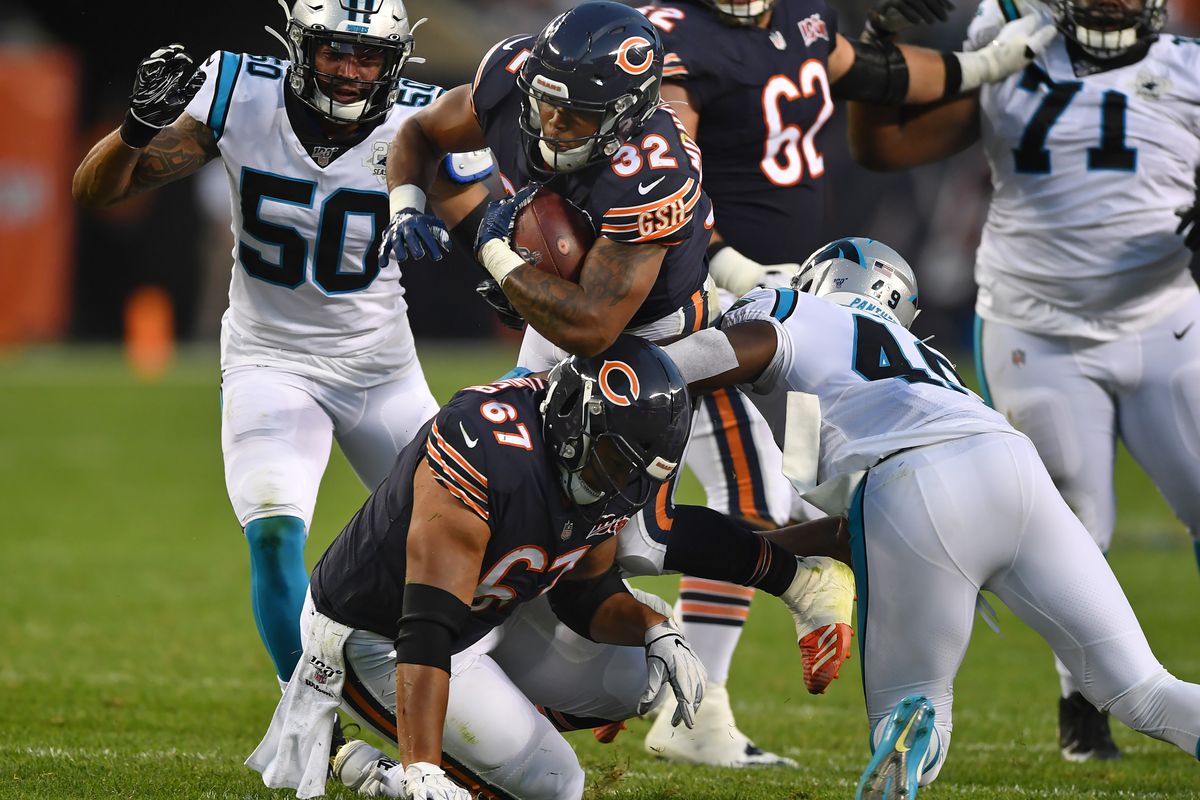 One of the biggest fantasy darlings during the offseason last year was the Chicago Bears’ third-round rookie RB David Montgomery. In dynasty and redraft formats, Montgomery was beloved. Some went as far as to say he was the best RB in the 2019 draft class (fellow draftee RB Josh Jacobs shut that down rather quickly). Fast forward a year later, and the sky is falling. Montgomery stumbled out of the gates and never recovered.

The Bears employed a three-headed committee early on with Montgomery and fellow RBs Tarik Cohen and Mike Davis. That ended reasonably quickly, though, and Montgomery took over as the lead back; however, Cohen was still involved. Montgomery finished the season with 242 rushing attempts for 889 yards and 6 TDs. In the passing game, he accounted for 35 targets, catching 25 of those for 185 receiving yards and 1 TD. He saw a substantial workload on the ground, but, because of Cohen’s presence, he had limited action in the passing game.

He floundered last year, and virtually everyone took note, but Montgomery still has some truthers. Unfortunately, you won’t be hearing from one of those truthers today as I’m fading Montgomery everywhere. We all know he has a tragic QB situation as everyone and their mother has already discussed that. So, rather than continue beating that same drum again, I found out some other concerning things about Montgomery’s situation. His offensive line was horrendous last season, and the Bears did nothing to improve on that, but what’s just as concerning will be the level of Cohen’s involvement in the passing game. It’s these things that make Montgomery borderline untouchable for me.

You couldn’t imagine how much I asked myself this question last season since Chicago’s first game of 2019. That opening night on Thursday versus the Green Bay Packers was one of the worst performances by an offensive line last year. They made the Packers defense look like the 1985 Bears, and it only went downhill from there. The running lanes were few and far between.

How bad was the Bears offensive line at run blocking? Per footballoutsiders.com, the Bears ranked 29th in the NFL in adjusted line yards. That accounts for all RB attempts and determines the accountability given to the offensive line through percentages. Losses equate to a 120% value, 0-4 yards is a 100% value, 5-10 yards is a 50% value, and 11 or more yards is a 0% value. You can read more on adjusted line yards and see the full rankings in the link below:

Given how bad the run blocking was, you can see why Montgomery struggled on the ground. He barely surpassed 3.5 yards per carry. Furthermore, out of 20 players who received more than 200 carries, Montgomery was one of five that didn’t eclipse 1,000 rushing yards. You don’t want your young RB on that list.

One would think that common sense would prevail, and the Bears would’ve focused on building their offensive line this offseason. However, that didn’t happen. Instead, they got worse in that area as Guard Kyle Long retired this offseason after suffering a season-ending injury three games into 2019. The Bears made no moves to add an offensive lineman in the draft or through free agency. Thus, his horrid offensive line situation from last season will continue to be a trend.

A lot of Montgomery’s value comes through the rushing game because of Cohen’s continued presence in the backfield. With the lack of improvement along the Bears offensive line, Montgomery will again struggle to be relevant in 2020. Combine that with his ugly QB situation, and it leaves a dangerous dark cloud over Montgomery’s dynasty outlook as well.

The Most Valuable Touches Aren’t There:

For RBs, the most valuable touches aren’t carries, its receptions. Sure, they receive more carries, but their effectiveness or productivity with their receptions are unmatched. That isn’t a surprise to those who take part in a PPR league.

Like I mentioned earlier, Cohen is still on the Bears roster and continues to be one of the better pass-catching backs in the NFL. Last year, of the three Bears RBs that contributed (Montgomery, Cohen, and Davis for seven games), only one eclipsed 35 targets, Cohen. The RB with 35 targets was actually Montgomery, while Davis only had seven. If you think last year was a fluke, in 2018, Cohen was the only Bears RB to top 35 targets once again as he had 91 that year.

Cohen’s involvement in the passing game isn’t going away anytime soon. He not only fits that role perfectly but also performs well in it. That means that we will likely continue to see a low target/reception count for Montgomery. It limits his fantasy upside, but when you combine that with everything else in Chicago, owners should be incredibly worried.

With the uncertainty surrounding his QB situation, the offensive line issues, and Cohen’s presence in the backfield, I’m out on Montgomery. They only spent a third-round pick on him, meaning they aren’t super invested. That leaves me to believe Montgomery has one more shot this year to prove something, but ultimately, I don’t think he gets it done. That doesn’t fall squarely on Montgomery’s shoulders, though. What was once a promising landing spot for any RB has quickly deteriorated into a black hole.

For those doing a startup currently, stay away from Montgomery. In PPR formats, Montgomery is going in the fourth round. He’s around players like WR Calvin Ridley, WR Robert Woods, and TE Mark Andrews. All of those are players I’d rather own, but if you’re starving for an RB wait till the next round. You’ll be able to catch either LA Rams rookie RB Cam Akers or Detroit Lions rookie RB De’Andre Swift.

For those who currently own Montgomery, I don’t know whether to sell now or tell you to wait and hope he has a few good games so you can sell high. I’m leaning sell now, but I wouldn’t blame you for holding onto him. Just whatever you do, don’t be that guy that latches onto Montgomery when he eventually has a good game or two. There’s only one person on Chicago’s offense that can beat the odds and be relevant for fantasy: Anthony Miller—just kidding, its WR Allen Robinson.

Are you a #NerdHerd member yet? For just $2.99/month, you get access to rankings, extra podcasts, the buy/sell tool, and more on the way. Find me on Twitter @DynastyWildcat .