Coming off a good rookie season, San Francisco 49ers WR Deebo Samuel was a prime breakout candidate. Then, just a few weeks ago, reports came out that Samuel suffered a Jones fracture in his foot. What does that mean for the 2020 season and his dynasty outlook? 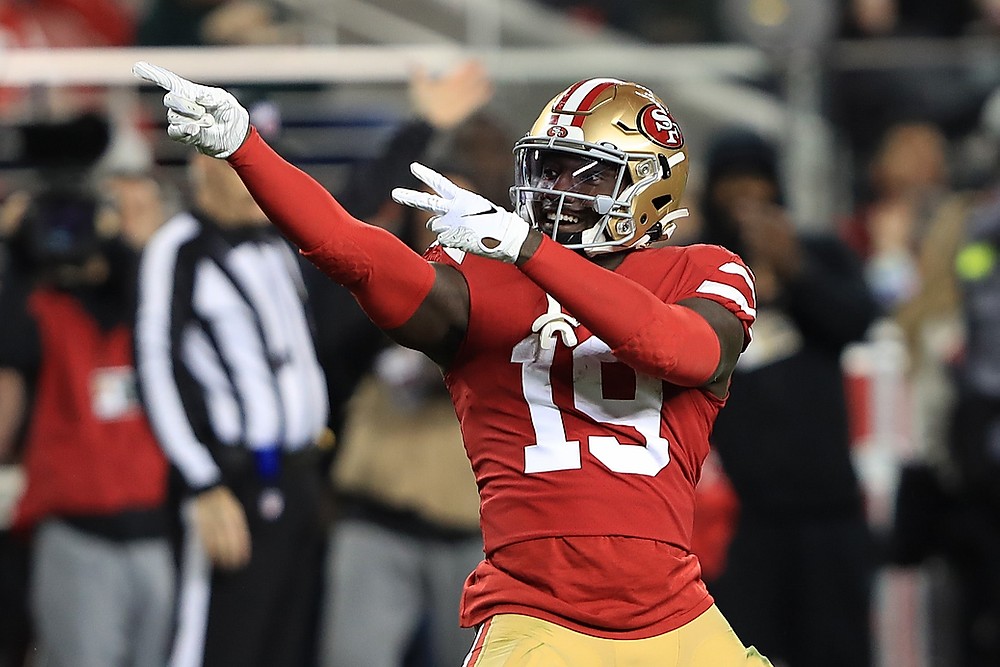 Mesmerizing. That’s one word that people often use to describe specific moments in San Francisco 49ers WR Deebo Samuel’s rookie campaign. In HC Kyle Shanahan’s scheme, Deebo excelled, and pole vaulted himself past every other pass-catching option on the team, not named George Kittle. He was a crucial part of the passing game and in the running game as well. As the year progressed, it became clear: Kyle Shanahan wanted to put the ball in Samuel’s hands. It didn’t matter if it was a post route or a jet sweep, Samuel was going to get the ball.

That not only helped Shanahan and the 49ers, but it helped your fantasy teams in a big way as well. He finished as the 32nd overall WR in PPR formats. He received 81 targets and caught 57 of those, which led to 802 receiving yards and 3 TDs. On the ground, Deebo accumulated 14 rushing attempts, 159 rushing yards, and an additional 3 TDs.

As you can see, versatility was such a big part of what makes Deebo special. As the year progressed and Samuel started to receive more targets, one would think that there would be a dip or lack of rushing production. However, as targets increased, so did his rushing attempts. That’s what had me and everyone else on the Deebo hype train, but now that train has been derailed. On June 18th, Deebo suffered a broken foot, to be more precise, it was a Jones fracture. The injury puts a damper on what many expected to be Deebo’s breakout season. However, it doesn’t affect his long-term prognosis.

Many Deebo owners are still pressing their hands against their cheeks with their jaw dropped as they are still recovering from the shock that came along with Deebo’s injury. The Jones fracture has a lot of negative connotations in the fantasy community and rightfully so. It has been a common ailment among several NFL WRs, many of which are highly productive in fantasy football.

Atlanta Falcons WR Julio Jones suffered the injury back in 2011 before the NFL combine, still worked out with it, and had surgery on his foot immediately following it. Fast forward two years later in 2013, and he had the same injury on the same foot.

Another instance of a player suffering from the same injury as Deebo is Kansas City Chiefs, WR Sammy Watkins. His circumstances are a bit more tragic as he initially sustained the Jones fracture in his left foot in April of 2016. During the season, he ended up on IR- designated to return because a teammate stepped on his left foot. He wound up returning in week 12 and played through the injury. Following the season, he had to have two screws inserted into his left foot.

Additionally, fellow 49er WR Trent Taylor suffered from the same injury. He wound up missing the whole season as he constantly had to fight off infection. These are the worst-case scenarios possible but are cautious tales about what could happen in Deebo’s 2020 season and what could follow if he’s not careful.

In the cases mentioned above, and countless others that aren’t, re-injury is certainly a possibility if Deebo and the 49ers don’t manage this correctly. Hell, even if they do, there is still an unusually high chance of re-injury associated with the Jones fracture. So, I went digging and found some things we as Deebo truthers and fantasy owners alike should pay attention too.

In a study about the recovery time involved with the Jones fracture, Selena G. Parekh, MD, MBA, and Jay Shah found that a recovery time of at least ten weeks or more resulted in a lower re-injury rate. How much lower? Well, players that returned in less than ten weeks had a re-injury rate of 20% instead of just 9% after hitting that ten-week benchmark.

Any news of Deebo returning to football activities before August 27th is a big-time negative. The likelihood of a re-injury more than doubles and makes it all the more likely fantasy owners will be without Deebo for a large part of the 2020 season. Returning on August 27th, however, does insinuate that Deebo will miss some time as he catches up and gets back into the groove of things. This scenario also doesn’t rule out the possibility of him showing up on the PUP (Physically Unable to Perform) list as any setback would land him on that.

A Look Into the Future

Putting aside Deebo’s 2020 season’s grim status, let’s take a gander at what his future holds. As previously mentioned, Deebo’s biggest weapon is his versatility. He can take handoffs or run a route that leaves the Defensive Back shaking in his boots. While his season started a bit slow, you saw flashes of what Deebo could be someday. As the season progressed, you noticed more and more of those flashes.

In the second half of the season, as Deebo got more familiar with Shanahan’s scheme, he became more involved in the passing and rushing games. From week ten on, Deebo received 54 targets, and 9 of his 14 carries. If you extrapolate that over a full season, Deebo was on pace for 108 targets and 18 carries. That would have made him one of only 32 other receivers in the NFL to exceed 100 targets. Of those 32, only eight didn’t top 1,000 receiving yards.

The 49ers did add a first-round selection at WR in the 2020 NFL Draft, Brandon Aiyuck. They also lost WR Emmanuel Sanders to the New Orleans Saints. Those two moves cancel each other out and won’t affect Deebo’s volume or value one way or another. So, when Deebo does return from the Jones fracture, he will be the 49ers number one wide receiver, and be second in targets behind TE George Kittle, which will be the perfect role for Deebo.

The Jones fracture certainly debilitates Deebo’s 2020 season and puts him behind the eight ball. However, he will not only return to what we all saw pre-injury but will be even better. Whether that will be in 2020 or 2021, remains to be seen. However, I wouldn’t bet on it being the 2020 season. Instead, the time that Deebo will miss represents a time for him to focus on getting even more familiar with the playbook.

I feel like I’ve said this a thousand times already, but don’t get your hopes up on Deebo breaking out in 2020. Expect it to be an up and down affair where he will miss a lot of games even after he initially returns as he struggles to fight back from the Jones fracture. I envision a recovery similar to that of Julio, and anything above that would make me happy. As my father always says, “Prepare for the worst. Hope for the best.”

As far as this pertains to his dynasty value, Deebo still holds the same value as he did pre-injury. Although his injury history is starting to look a little disturbing, so it is something I’d keep an eye on. Beyond that, the flashes Deebo showed and volume he received at the end of last year has me believing that he will be a top 18 dynasty fantasy WR over the long run. Not to mention, he is one of a few guys that have a top 12 ceiling dependent on the volume he sees.