Last year, Tennessee Titans rookie WR captivated NFL audiences. He took the NFL and fantasy owners by storm. Now that 2019 is in our rearview mirror, can A.J. Brown somehow live up to the high expectations in 2020? Or will he suffer from a sophomore slump? 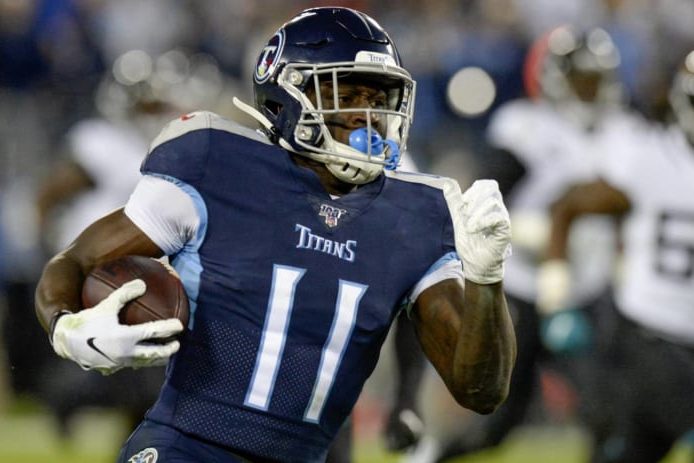 For the first time in what’s felt like a long time, we finally saw a crop of rookie WRs perform well in their debut season. However, none were better than Tennessee Titans WR A.J. Brown. Leading up to the NFL Draft, many analysts projected him to be a first-round pick. That never came to fruition, and Brown fell to the Titans at pick 19 in the second round. Most analysts were down on Brown due to that landing spot, and Brown slipped in rookie drafts.

If you wanted to take a victory lap for not picking Brown and being duped by his situation, you should’ve done it quick as Brown struggled out of the gate in the first five weeks. He was barely targeted, and his QB was the dreaded Marcus Mariota. However, when QB Ryan Tannehill took over under center, Brown transformed into a transcendent force on the football field. He wound up finishing the year as the WR21 in PPR formats with 52 receptions, 1,051 receiving yards, and 8 TDs. For a rookie WR, those numbers are excellent. Because of that production in his rookie year, many assume he will build on that in 2020.

I expect significant improvement from Brown in his sophomore campaign, but that’s not to say he is without his issues. Brown was one of the most efficient WRs in the NFL last season with an incredible yards per reception. He also wasn’t hyper-targeted like some of your more prominent fantasy WRs. Brown will improve on the foundation built in 2019 as he’ll see an increase in targets, but his efficiency will dip. Regardless, he’s one of the premier young WRs in the league that is an incredible asset to your dynasty teams.

Efficiency That Blows Your Mind

If you didn’t know Brown was one of the most efficient WRs in fantasy football last year. To help explain that, Brown was one of only two receivers to eclipse 1,000 yards receiving less than 60 receptions. The other WR that did that was Mike Williams of the Los Angeles Chargers with 1,001 yards. The average receptions for a WRs with 1,000 yards or more is 85.76. Brown only had 52 receptions, so he’s well below the average.

That goes hand in hand with his mind-boggling Yards per Reception(Y/R) of 20.2. It is incredibly rare for a WR to accomplish, let alone a rookie. He finished the season second in the NFL in that statistical category (Williams led the league). The next closest WR to Brown was at 18.3 Y/R. A near two yards better then the next closest person should tell you that that isn’t normal for a WR.

Can it be Replicated?

While Brown is a superior talent, these numbers don’t look repeatable. I researched and wanted to see how many guys finished with over 20.0 Y/R in the three seasons before 2019 (2016-2018). Interestingly enough, no receiver topped 20 yards per reception in that period, but that’s not all. I made it a point to see where the top three guys in Y/R finished the following year. Here are the results:

The results show that repeating is not an impossible task, but the odds aren’t in your favor. Only two out of nine possible receivers came back the next year and had a Y/R of 16 or more. That leads me to believe that Brown won’t repeat that 20.2 Y/R in 2019, and it will be at least 2 yards less than that next year. However, there’s still plenty of reason to have hope for Brown.

Brown also had limited targets sent his way in 2019. Now, there are two reasons why his end of year target numbers are a bit lower. The first reason is that when Brown played with Mariota in the first five games of the season, he didn’t see more than five targets in any game. The second reason is solely based on the Titans scheme, which is a run-first offense. That meant limited passing opportunity, but I expect that to change some in 2020.

First of all, the first five games with Mariota last season were a significant detriment to Brown’s end of year numbers. In that span, he averaged only 3.8 targets per game. After that time frame, Brown’s target average went up to 5.9 per game. If that had happened over 16 games, Brown would have accumulated 94 targets. Another interesting fact is that he received 7.5 targets per game during the final four games of 2019. When you extrapolate that over 16 games, it equates to 120 targets.

Now, I’m not predicting Brown will see 120 targets next season in the Titans offense. However, that proves that he can see a large number of targets in the run-heavy Titans offense. It’s reasonable to assume his success last season and his increased targets at the end of the season last year that Brown could be in the 110 target range. That’s where I see Brown’s target share in 2020.

Brown will receive over 100 targets in 2020, write it down. Now, we just need to find out what level his efficiency will be at. If I had to guess, I would say Brown would be at or around 15 Y/R, but it’s anyone’s guess. As long as he can do that, he will build on his WR21 performance from last season. I envision him finishing as the WR16 in PPR formats next year.

As far as his dynasty outlook goes, not much needs to be said. He is easily a top 16 player at his position long-term and is worth whatever you invest in him. In startups, Brown’s average draft position is at the beginning of the fourth round around guys like RB David Montgomery, TE Mark Andrews, and WR Calvin Ridley. Considering those names, Brown is a steal in startup drafts. The only player I want more than Brown in that range is Andrews, but that’s because of the decimated TE landscape. Unless you’re getting offered an insane amount of value, I’m holding onto Brown as he is penciled in as the next elite fantasy WR.

Titans Getting the Band Back Together
Fantasy Forecast: The Chicago Bears