Last year, rookie WR Darius Slayton of the New York Giants showed flashes of fantasy prominence, but they were few and far between. Some believe that Slayton is criminally undervalued, while others view him as merely over-hyped. So, which one is it? Read my thoughts below in the final edition of this series of projections. 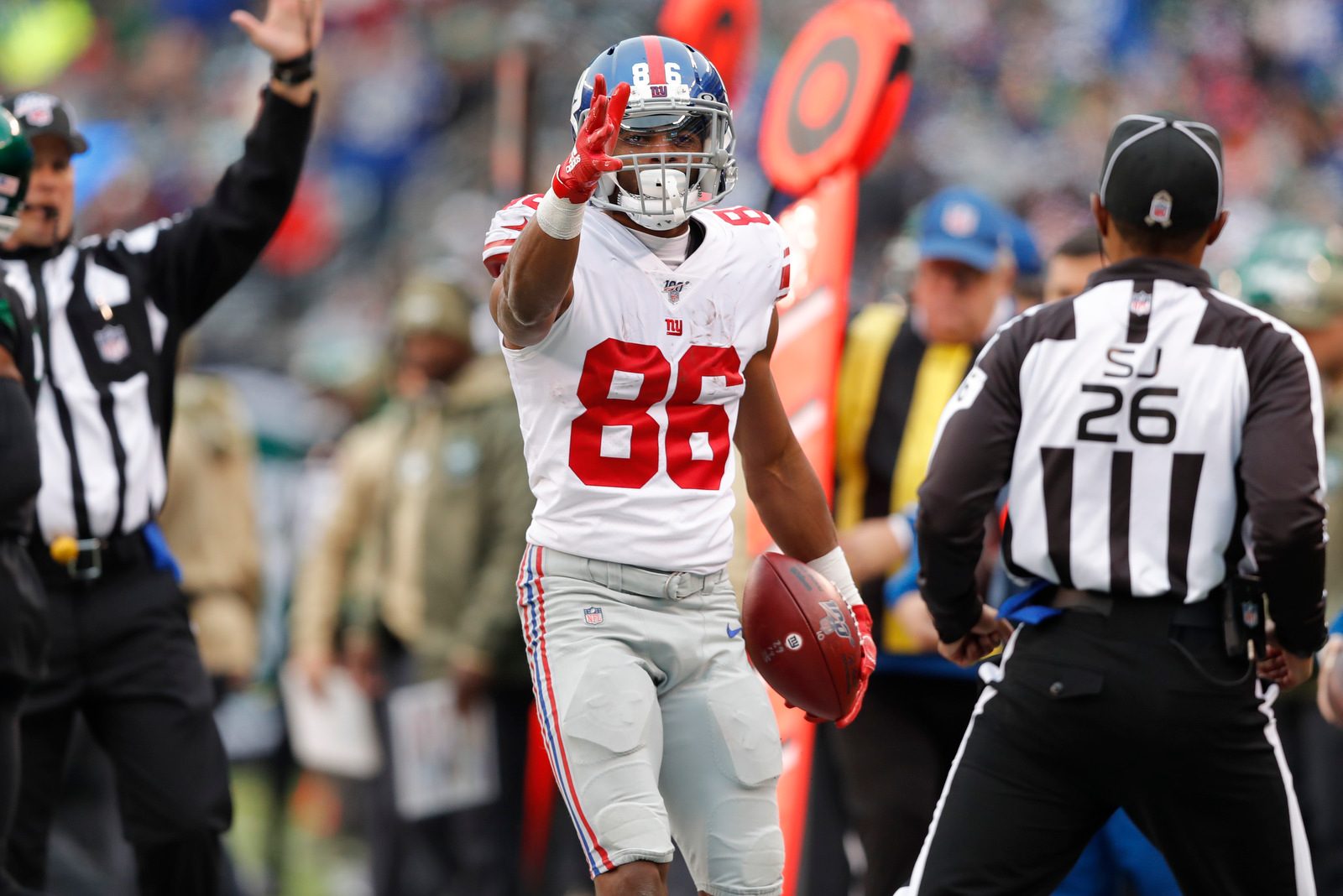 In 2019, New York Giants rookie WR Darius Slayton had an exciting season.  The Auburn product missed the first two games of the season due to injury, which caused him to miss some playing time with the now-retired QB Eli Manning. When Slayton returned in week three, rookie QB Daniel Jones took over under center. One helluva sporadic season followed suit.

Slayton became a very boom-or-bust fantasy option and didn’t provide much security when fantasy owners plugged him into their lineups. Granted, he played with a rookie at the most crucial position for the WR, QB. However, he benefited from being one the very few options Jones had to throw to at times. Slayton benefited from absences by RB Saquan Barkley, WR Golden Tate, WR Sterling Shepherd, and TE Evan Engram at various points of the season. It clouds over what Slayton accomplished last season and somewhat diminished it.

As we inch closer and closer to the start of the 2020 season, questions remain about Slayton. Will he prove that he was a product of injuries in 2019? Or will he show up all the doubters and breakout in 2020? These are the questions I am focusing on projecting Slayton’s outcome in 2020 and giving you a glimpse into his future.

The Story of Darius Slayton’s 2019 Season

Last year, Slayton had 48 receptions for 740 yards and eight TDs; those numbers came off 84 targets. Slayton received six targets a game and was on pace to reach 96 targets if he played a full 16-game season. However, that didn’t guarantee a baseline in his production. To illustrate his lack of consistency, here are a few bullet points:

There’s only one word to describe that season: inconsistent. Even though Slayton had a consistent number of targets headed his way, he could not capitalize on them for the most part. That’s not all bad when you consider the fact that Slayton was playing with a rookie QB who barely topped 3,000 passing yards in 14 starts; Meanwhile, Slayton was also a rookie. That brings me to the injuries surrounding him.

After discovering his inconsistency last year, I learned some other little nuggets involved in Slayton’s 2019 season. Slayton blew up in games where one or more of his comrades weren’t suited up for the game. His best games last year were in weeks five, eight, ten, and 14.

Slayton had four receptions, 62 receiving yards, and one touchdown. He had 16.2 fantasy points that week (PPR). The Giants had already lost Barkley. They also lost Shepherd during the latter part of the game, which propelled Slayton into the following week’s starting role. That was also Golden Tate’s first game of the season as that was his first game back following his four-game suspension.

Slayton had two receptions, 50 receiving yards, and two TDs. He had 19 fantasy points that week (PPR). Shepherd missed this game, and Barkley returned the week before his injury. At this point, Tate got his footing back and started from here on out.

Slayton had five receptions, 154 receiving yards, and two TDs. He also had his highest yards per target in this game, as he had 32.4 fantasy points (PPR). The only person missing from the cast surrounding him was Engram.

As you can see, Slayton did his best work with the people surrounding him not suited up. It’s particularly noticeable when Engram wasn’t in attendance. In games without Engram Slayton’s averages per game were as follows:

He had career highs in targets, receptions, and receiving yards without Engram in the lineup. It shouldn’t be ignored that Slayton did his best work with him absent. That’s very worrisome when it comes to projecting Slayton over next season and beyond. However, what he accomplished is still impressive. Sure, he was the only target, but we’ve seen others with that honor accomplish far worse. So, there is a positive in that that Slayton owners can cling too.

Another significant concern for Slayton moving into the 2020 season is where he will be in the pecking order. There is only a game, or two were Slayton, Tate, Shepherd, Barkley, and Engram were all healthy. So, we can’t exactly look at what happened last year when they were all healthy. We can look at how many targets they had per game when they suited up; the results were somewhat shocking.

Before the research, I would’ve thought Tate led, followed by Engram, Barkley, Engram, and Slayton. So, since he isn’t last, I guess that’s a somewhat positive note. That illustrates to me that Slayton wasn’t very high in the pecking order last season. That’s especially true when you consider that he finished with 84 targets, while Tate topped him with 85 targets in three fewer games, and Shepherd nearly tied him with 83 targets as he played in four fewer games. That has me worried about Slayton next season. He was on the verge of being an afterthought in that offense, and what’s to say that won’t happen next season if everyone can stay healthy.

After doing the research, we can confidently say Slayton benefited immensely from the absences and the Giants offense in 2019. However, its also fair to say that he showed more than enough potential to warrant a second glance in 2020. Both statements can be and are accurate. They aren’t mutually exclusive. With that said, I am bewildered as to what to do with Slayton in 2020. The fact that his best games occurred with the team’s premier options out is damning evidence. His only two 100 yard receiving games happened without Engram in the lineup, which corroborates with the targets per game numbers because he was the best option in the passing offense.

However, I believe that 2020 will play out a little bit differently. Slayton proved himself in a big way last season when other options missed time, and that won’t go unnoticed. With his performance, he earned a little more opportunity and playing time. How much is yet to be determined. Slayton will continue with his inconsistency we talked about earlier because he won’t be receiving a solid baseline of targets, unlike last season. Meaning he once again will be a boom or bust option. However, with Engram in the lineup, his boom games are severely limited. I believe in Slayton, and if he can continue to improve this year, he could be a prime breakout candidate in 2021.