A glimpse into Drew Lock’s small sample size of 2019, and projecting what he’ll do in 2020. Plus, I might’ve weighed in on the ranch vs. blue cheese debate. 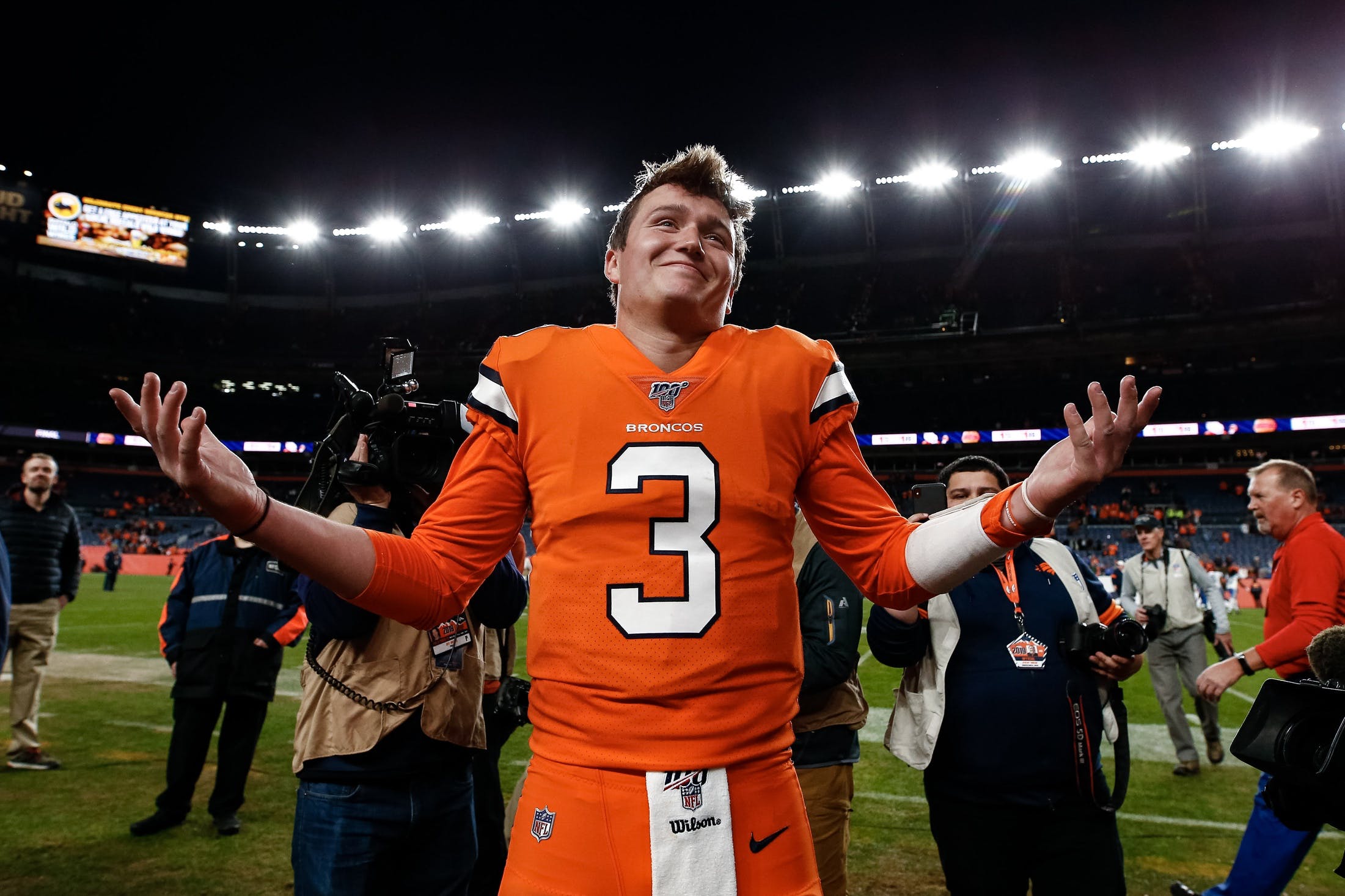 Before I dive into Drew Lock, I have to discuss an issue that has been weighing on me pretty heavily. You probably won’t understand this if you haven’t listened to a recent Dynasty Nerds Fantasy Football podcast, but when choosing between ranch and blue cheese I would choose ranch every day and twice on Sunday. I’ll take it one step farther, if you pick blue cheese instead of ranch, I might legitimately be afraid of you.

Moving on, today is my first crack at trying to assess a quarterback. Drew Lock, the second-round selection by the Denver Broncos in the 2019 NFL draft is the subject. He started the final five games of 2019 for the Broncos. All of this led to the recent news where General Manager John Elway said Drew Lock is “the guy” at the combine press conferences. I’m going to admit that there just isn’t a lot to go on film wise from Lock’s five games started, but in those games, Drew Lock had plenty of flashes. It might not seem like much but in those five games, he threw 7 touchdowns paired with only 3 interceptions. An interesting note is that in his final two starts, Lock threw zero interceptions. He also had a 64.1% completion percentage, which is on par with a normal rookie QB and a 1,020 passing yards.

Drew Lock’s stats over the final 5 games of the season.

What Do I See in Drew Lock?

The simple answer is a boatload of potential. He has some positive characteristics in his game like arm strength, timing, and accuracy. All of which are needed to be a good if not great NFL quarterback. However, there are negative parts to his game and, one, in particular, reared its ugly head several times in 2019. When he was in college Lock had trouble with his footwork, but he seems to have corrected that issue before his NFL debut; however, when Lock faced any sort of pressure in the pocket those mechanics he worked on flew out the window. Several times he was seen backpedaling under pressure and delivering passes either of his back foot or off balance. Yet, in some of these instances, it was masked by a good throw and catch that gained a chunk of yardage. This is a correctable issue and I expect it to be corrected by his new offensive coordinator, Pat Shurmur, who we will delve into later on.

However, when I transitioned from comparing it to veteran QBs to rookie QBs, I noticed a trend. Now, since the CAY/cmp (completed air yard/completion) statistic was created in 2018, I’m only able to compare the past two years of rookie signal-callers to the veterans. Rookies tend to have a smaller CAY/cmp than veterans, however, Lock’s was substantially lower. His 4.7 CAY/comp is lower than the norm for rookie QBs and turns out to be somewhat alarming, granted it’s only taken from a 5 game sample. In comparison, the first overall pick in the NFL Draft last April, Kyler Murray, had a 5.4 CAY/cmp. Murray’s CAY/cmp isn’t substantially larger than Lock’s, but it was the middle ground between Lock and some of the other rookie Quarterbacks in the past two years. Below I created a table showing the past two years of those rookie Quarterbacks and their CAY/cmp from their opening season.

No one can deny Lock’s potential, but the numbers don’t lie. He had a mediocre rookie season with incredible flashes and a terrible 4.7 CAY/cmp. Now, I believe that to be more scheme related as the previous establishment wanted to give players the ball closer to the line of scrimmage. However, Denver has great deep threats surrounding Drew Lock. One of those guys is Courtland Sutton who, by the way, is more like a 75/25 option then 50/50 on deep balls; I mean the dude is a beast. Also, let us not forget that they have Noah Fant at tight end as well, who is a great vertical threat at his position. At times last year, these players had select moments to showcase their downfield abilities, but it was few and far between. With Denver’s new offensive coordinator, expect that to change and be more of a feature in the offense moving forward.

A Change That Could Make All the Difference for Lock

On January 14th, the Denver Broncos made a substantial change to its staff by bringing in Pat Shurmur as the offensive coordinator. A move that mostly flies under the radar, as it is rarely if ever discussed on any sports talk shows on ESPN or NFL Network, it has the potential to be huge for a guy like Drew Lock. Unlike Adam Gase, Shurmur is certainly as close to a quarterback whisperer as one could be. When taking a look at his resume, he was part of the staff that led to Nick Foles’ 27 touchdown and 6 interception campaign in 2013 with the Philadelphia Eagles and turned journeyman QB Case Keenum into a somewhat attractive fantasy option in 2017 with the Minnesota Vikings. Focusing on the 2017 Minnesota Vikings for this comparison will tell a more accurate tale, as I feel that this will mostly resemble the offense Shurmur will implement in Denver.

Keenum started 14 games, played in 15, and had 3,547 passing yards, 22 touchdowns, and 7 interceptions while completing 67.6% of his passes. Shurmur led Keenum to a career-high in both touchdowns and completion percentage, which are two of the more important statistics when grading a QB. Another circumstance of Shurmur aiding a quarterback’s efficiency was with Eli Manning in 2018, while he was the Head Coach of the New York Giants. In the 2018 season, Eli Manning had the highest completion percentage of his entire career. In addition, Keenum also had his highest yards-per-attempt in his career; if Shurmur pushes a journeyman quarterback to throw the ball down the field, you know where his desires lie. Now Lock won’t have the talent around him that Keenum did, but I would also argue that he is the more talented option between the two and the way I view it, that will negate the talent difference. In short, having Shurmur at the helm will increase scoring opportunities for Lock, and will help him be more efficient as a passer due to Shurmur’s scheme.

Drew Lock is a little harder to project than the past 2 players in the series, but I’m always right (kind of like Rich’s crystal balls). He will be at the bottom of the list as a QB2 in the 2020 season and won’t serve as more than a bye week fill-in but will be valuable as a 2nd option in super-flex leagues. If your QB is a little older like a Drew Brees/Philip Rivers, look to buy Drew Lock as I see a minor breakout occurring midway through the 2020 season that will continue heading into 2021. Well, that is if we even have a 2021 season because of the collective bargaining agreement (deep sigh Oh lordy).