Can Ian Thomas break out and enter a Tight End 1 status in 2020? Or will he falter and succumb to a dreaded Carolina Panthers’ rebuild? Read as I dive into the positives and negatives facing Ian Thomas next year. 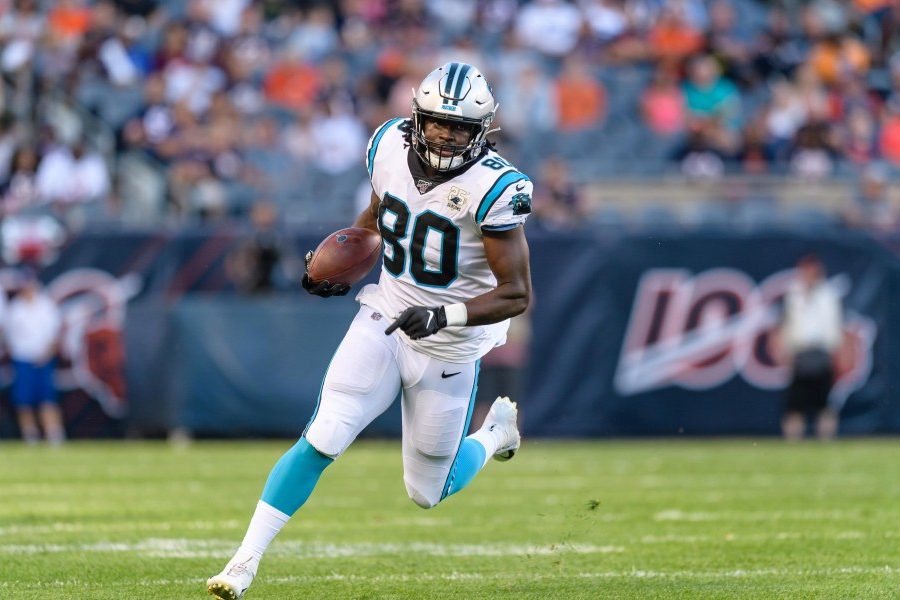 Seldom players have come into the league with as little production as Ian Thomas did in 2018; if I’m being forthright in my analysis, he attended Indiana University and with me being a Kentucky fan, Thomas is already starting behind the eight ball (I’m joking, of course). However, I think Ian Thomas has an enormous amount of potential at the tight end position and is a nice target to acquire in such a dried-up landscape.

As I previously stated, Ian Thomas entered the NFL in 2018 out of IU with little production. In 2 years, he played in a total of 11 games and only had 28 receptions for 404 yards featuring 5 receiving Touchdowns. Yet, he was still highly touted coming into the draft and was selected in the fourth round by the Carolina Panthers. It was an ideal situation for a player of Ian Thomas’ background; he got to sit behind what many believe is a Hall of Fame tight end in Greg Olsen. Still, Thomas provided tiny glimpses of what he can do when allowed to be the starting tight end for the Panthers as injuries pushed him up the depth chart. However, he was largely inconsistent. So, what should the fantasy community expect from him now that Olsen has left town?

Historically, rookies used to be development projects that wouldn’t play until their second or third seasons, but recently this has changed. Now, people expect these rookies to come into the NFL and make an impact from day one. Few rookies across the NFL at any position, on offense or defense, have immediate impacts, especially those at the Tight End position. Over time the fantasy community has come to realize this, and some have adjusted appropriately. For fantasy purposes, I categorize a breakout for a Tight End as finishing as a top 12 fantasy option at the position. Rarely does a Tight End break out before their third season. Don’t believe me? I went back into the ye’ old vault and found this gem from fellow Dynasty Nerds writer Jon Diment.

In his article, Diment set out to answer this question, “How long does it specifically take the average tight end to break out and have a TE1 season?” He examined every tight end that was drafted from 2007-2015 because the article was written in 2018 and he wanted to give the tight ends selected after 2015 at least three years before judging them. He broke it down by rounds and discovered that tight ends in the first three rounds usually take about 2.8 years to breakout. Those drafted after round four, however, have a low hit rate (7 of 91 tight ends have been a TE1 for fantasy), but if they pan out it takes them 3.6 years to breakout.

Now, Ian Thomas was drafted after the fourth round, which means the probability of his success is low. I would argue that he has all the tools to make this happen. Not to mention that he still hasn’t hit the 3.6-year mark to break out. An illustration of what I believe Thomas can do is evident in Tyler Higbee. Many analysts, fantasy or not, thought of Higbee as an afterthought or backup heading into 2019. He was behind Gerald Everett on the bench and the Los Angeles Rams mainly used 3 wide receiver sets. However, midway through the year, Higbee broke onto the scene after Everett and wide receiver Brandin Cooks got injured. Granted it took two injuries, but he broke out and now Head Coach Sean McVay has told reporters, “We’ve got big plans for him.” Higbee finished 2019, his breakout season, with 69 receptions, a career-high 734 receiving yards, and only 3 Touchdowns. This included a stretch where he had 100+ receiving yards in 4 straight games.

This illustrates why Ian Thomas is not only worth the risk but is someone you should go out and get for your dynasty teams. Until now, Greg Olsen has been the starting tight end for the Carolina Panthers, and, Ian Thomas can go into training camp as “the guy” as long as there are no additions in free agency at the position. With the other holes on the roster, it’s unlikely they pay a tight end a hefty chunk of change. So, I expect Ian Thomas to be the starting tight end from day one.

Sure, Thomas struggled to catch the ball and had a 10% drop rate last year, but the year before on a larger sample size he had a 6.1% drop rate. Plus, if we’re being honest there’s a big difference in catching passes for Teddy Bridgewater and catching passes from Kyle Allen and Will Grier. Do you know who else had a high drop rate in their third season? Highly touted free agent Austin Hooper, who had a drop rate of over 4%, even Hunter Henry had a drop rate exceeding 5%. Unless you are an elite tight end, in your first few seasons you’re more prone to drops as you are thinking too much on the field. Below is a chart comparing Thomas’s drop rate to other young tight end s in the NFL over the past two seasons.

Everything is About to Change

Another essential point is that there is a new regime in Carolina with the hiring of first-time Head Coach Matt Rhule and first-time Offensive Coordinator Joe Brady. You may know the latter as the passing game coordinator for the 2019 National Champions, the LSU Tigers. With Joe Brady expected to call plays, Carolina is about to be reinvigorated on the offensive side of the ball. When Brady was the passing game coordinator at LSU last season the offense was completely altered. The transformation from 2018 to 2019 with Joe Brady was a drastic one. Imagine going from a passing game that averaged just over 228 yards per game and one touchdown, to averaging 401 yards per game and four touchdowns. It’s like going from a 2005 Toyota Corolla with a jacked-up bumper (yes, that is indeed what I drive) to a Porsche 718 Spyder (what I wish I had).

Furthermore, when examining his offense a few things popped out at me and would for you as well. Initially, when looking at LSU’s breakdown of the passing game and where targets went, the usage of tight end Thaddeus Moss wasn’t noteworthy. That is especially true when considering what the other players in this offense did. Yet, when examining the film, you can see that Brady and this offense moved the tight end across the formation. Whether he would lineup as a normal tight end, in the slot, or on the outside, he was always lined up in different spots. I went through and captured some of this from LSU’s playoff semifinal versus the Oklahoma Sooners. Below is a compilation of a few different ways LSU would line up Moss last year.

Why is this important? Well, it shows me that Carolina, and more specifically Joe Brady, will be moving Ian Thomas across the formation where he can do some damage. They could line him up in the slot and match him up against a linebacker that can’t keep up with him; Or move him out wide and get him matched up with a corner that he could abuse. Either of these gives me confidence moving forward in Ian Thomas’s value.

Equally important is the number of targets that left town with Olsen. Couple that with the fact that Carolina doesn’t have a solid number three option behind wide receiver DJ Moore and running back Christian McCaffery. The hope is someone like wide receiver Curtis Samuel will step up and he may, but I believe that guy could equally be Thomas. With the number of targets available after the departure of Olsen, the volume will certainly be there for Thomas. It will be up to him whether he capitalizes on that.

A lot can change depending on how this free agency and draft shake out. But I don’t see Thomas losing his starting role, especially with the thought that the Panthers are going into full rebuild mode. Why not give the guy who has been sitting and learning behind another great tight end a chance to prove his worth? That’s what I think the Panthers will do with Ian Thomas. The worst possible outcome I envision will be Carolina drafting a tight end this year, but there just aren’t any GREAT tight ends this year. Because of that, Thomas won’t lose his starting job to some rookie so he will be the guy for Carolina at his position. Due to the sheer amount of volume I expect him to receive next season, I predict Thomas will finish as a top 12 fantasy option at tight end. If he capitalizes on his volume expect to see him in a tier just behind the likes of Mark Andrews, and in a tier with Evan Engram. However, if he fails to capitalize on his volume, he will be a low-end TE1 that will be unreliable for large stretches of the season.

❓Is there still hope for Anthony Miller?

❓Was he a victim of circumstance?

Coming out of Memphis and entering the 2018 NFL draft, Anthony Miller showed a lot of promise as a prospect. Enough promise that led him to be picked ...

🎯 Gage Bridgford (@GbridgfordNFL) takes a look at several undervalued WR's you should be targeting for the 2020 season. 👇

🎓AJ Dillon is a hulk of a running back who bulldozed his way to a very productive collegiate career at Boston College.
Read what Jeff Abercrombie, @thesofascout has to say about what to expect as AJ Dillon makes the jump. 👇

AJ Dillon is a hulk of a running back who bulldozed his way to a very productive collegiate career at Boston College. Read what Jeff Abercrombie, @the...

Sources: The #Texans are in the process of trading for #Rams WR Brandin Cooks. On the move again, this time to Houston.

The @Browns have chosen to move on from both Christian Kirksey and Joe Schobert in 2020. Read @50shadesofdrunk as he breaks down the young guns who could be stepping in to replace them!👇

Foles to the Bears
Trending Up: Free Agency Edition