Entering his third season in the NFL, will Christian Kirk breakout? Or will he continue to be a mediocre fantasy option for dynasty fantasy football teams? Read the article to find out where I think Kirk stands in 2020 and beyond. 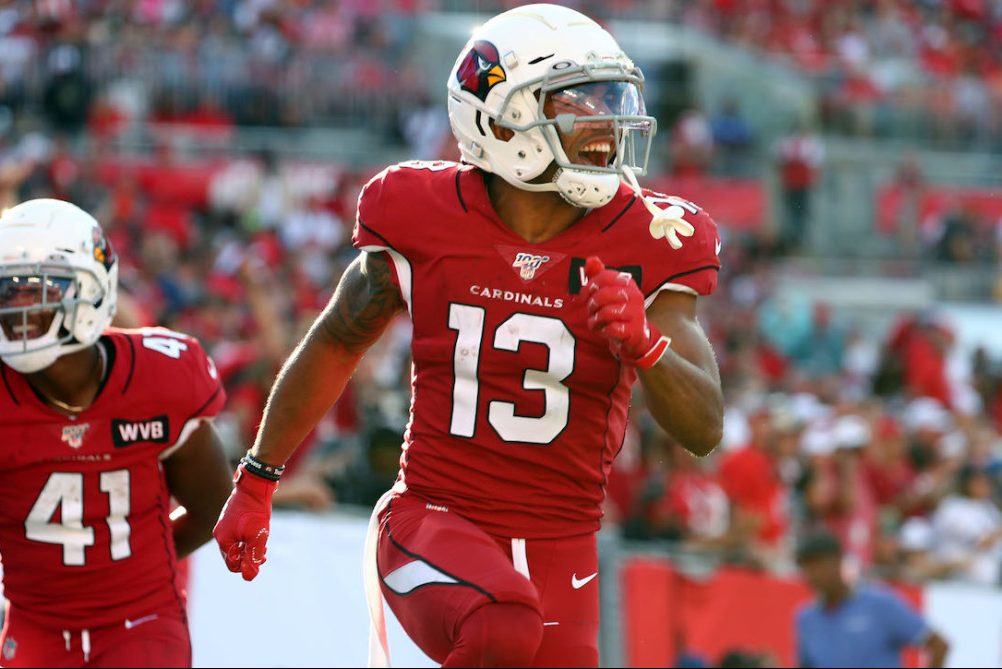 On the heels of part seven of 20 Projections for 2020, where I discussed QB Kyler Murray, I had to talk about one of his younger options. I thought so, which brings me to the featured player of part eight. That player is none other than WR Christian Kirk. Kirk is entering his third year in the league out of Texas A&M University. He was selected in the second round (47th overall) by the Arizona Cardinals.

Last season, Kirk was vastly improved compared to the production in his rookie year. He received 40 more targets last year (108 total) then he did the year prior. With the increased opportunity, came increased production, his receptions, and yards all raised. He went from 43 receptions and 590 yards to 68 receptions and 709 yards. Not to mention, Kirk improved on his drop rate in year two, even with the increase of targets. He had a drop rate of 5.9% on 68 targets in 2018, while he only had a 3.7% drop rate off 108 targets in 2019. However, he did fail to improve upon his TD total of three in his rookie season as he once again had a measly three TD’s at years end. All three of his TD’s in 2019 came in week ten versus the Tampa Bay Buccaneers.

Overall, last year Kirk was vastly improved and provided many fantasy owners with hope for what’s next. Then, Kirk was struck by lightning in the form of All-Pro WR Deandre Hopkins as the Cardinals struck a deal to acquire the former- Texans star receiver. In and of itself, that was terrible news for Kirk’s future, but what has flown under the radar about the Cardinals passing game towards the end of last year is just as bad. It’s a solid one-two punch that has me jumping off the Christian Kirk bandwagon.

The Blackhole of Target Consumption Now in Arizona:

Now that title above contains some negative connotation. It’s not an indictment on Hopkins, but more of a factual statement. No matter what QB Hopkins has played with or what weapons have surrounded him, he has always been and will be a target hog. That is a man that has only had fewer than 127 targets in a season once (he still had 97 targets that year), and that was in his rookie year with the Houston Texans. Let’s not forget that he also had a soon-to-be Hall of Farmer, Andre Johnson, across from him.

So, with Deandre Hopkins coming to town, where does he get all those targets? Via 4for4.com, the Arizona Cardinals have 9.3 vacated targets per game. Hopkins is going to eat up all of those and more. Add on the team’s fourth-round selection last year, Hakeem Butler, will be healthy going into the season and that previous year’s second-round pick, Andy Isabella, is still there, and you have a complete cluster.

There are mouths to feed all over that offense, and I didn’t even mention RB Kenyan Drake or WR Larry Fitzgerald. That is a big problem for Kirk, especially when considering he didn’t do a ton with the 100+ targets he received. Don’t get me wrong 68 receptions and 709 yards isn’t bad, but that’s not what you’re expecting of a receiver you gave a 100 targets too. There’s reason to wonder if Kirk loses targets to a mix of Hopkins/Butler/Isabella next year to see if that young talent can do more with the opportunity than Kirk did.

Kirk is a phenomenal deep-threat at the WR position and makes defenders think twice about pressing him or stacking the box to stop the run. However, that doesn’t help your fantasy teams; it hurts them. One of my few fears with Kirk is that HC Kliff Kingsbury uses him as a decoy opposite of Hopkins to open things up similar to what the Texans did with Kenny Stills last year when Will Fuller got hurt for the 100th time. Kirk fits the mold of a WR who does more for his NFL team then he will do for your fantasy teams. The Cardinal’s actions in the draft last year and in acquiring Hopkins this year speaks to that.

A Tragic Finish to a Once Promising Season

A few weeks ago, I discussed Kyler Murray’s horrid play from Week 11 on, and Kirk was side by side with him. These two fell apart by the end of the season, and if you owned Kirk, you felt every ounce of pain you received for starting him. The first ten weeks of the season were good, and Kirk crept his way into WR3/Flex territory. Then from week 11 on this took place:

He didn’t light the world on fire before, but he did have a few great games and illustrated the ability to produce for your fantasy teams. Just like with Kyler, Kingsbury showed a desire to run the football over that stretch, and it hurt the Cardinals passing game, yet they won games. If they do stick with running the football and focus on passing less, it will spell trouble for Kirk short term and long term regarding fantasy football.

Kirk is always going to be a boom or bust player with stretches where he struggles. However, we saw a stretch of a lack of production at the end of the season. It wasn’t due to a lack of potential or poor play. Instead, it was due to a shift in philosophy, and that’s the scariest way to witness a player lose production. If it was just a drop off in QB play that spurned Kirk or an injury, he could overcome that. However, with it related to a change in philosophy, it isn’t something Kirk can overcome with good play. He can only perform with what he’s given, and we have yet to see him perform with a large workload, which leaves significant doubt about whether Kirk can do it with a smaller workload where he’ll have to be more efficient.

I am apprehensive about Kirk for the foreseeable future; Hopkins will get his, and it will take away from Kirk. With the change in their philosophy, there will be less opportunity for Kirk to work with as well. No matter what way you look at it, Kirk is going to lose some opportunity. That will put a considerable damper on his ceiling. I was never too high on Kirk when he entered the NFL, and I’m still not. Sadly, it looks like the Cardinals aren’t either, and that’s due to the moves we’ve witnessed them make the past two years since they drafted him. I would say to sell Kirk, but I sincerely doubt you’d be able to get anything of value for him. Hold Kirk and hope and pray that he has a few blow-up games consecutively next year then get out while you can.

The Dirty Ham Dynasty 2020 Rookie Draft
My Draft, My Story and the Quest for the Golden Ticket