With Melvin Gordon out of the picture this year, what can we expect from Austin Ekeler? Read this week’s edition of 20 Projections for 2020 as I delve into Ekeler‘s future. 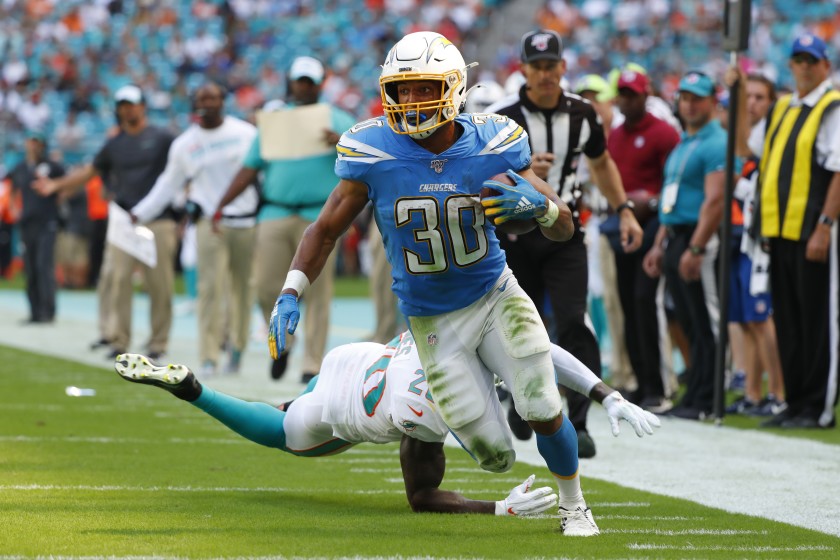 If we put aside the outstanding landing spot for some of the members in this 2020 rookie class, the most exciting outcome of the offseason took place out in Los Angeles. This offseason former- Los Angeles Chargers RB Melvin Gordon signed a deal with the Denver Broncos. Thus, leaving RB Austin Ekeler all by his lonesome. However, we’ve all seen how Ekeler does when Gordon isn’t available, though it was a short stint.

When Ekeler entered the NFL in 2017, he went underrated. Since then, he’s had a chip on his shoulder to prove he belongs in the NFL and has performed admirably behind the Gordon mentioned above for three years now. That includes last year where Ekeler netted 557 rushing yards, 993 receiving yards, and 11 total TD’s off 132 attempts and 92 receptions (108 targets). That’s all in the past now, and Ekeler will be the main guy for the Chargers. It also doesn’t hurt that they gave him a massive vote of confidence by way of a four-year, $24.5 million deal this offseason. The contract highlights the Charger’s desire to keep him involved, and with the way he performed last year, how could they not.

There are positives as it pertains to Ekeler and his value moving forward. The team didn’t invest significant draft capital at the RB position in the 2020 NFL Draft, yet they did acquire UCLA Bruins RB Joshua Kelley in the fourth round. The biggest positive, however, is that Gordon is now in Denver and no longer a piece in this backfield. That is the most significant bump that could have come for Ekeler, but I still have one issue lingering on my mind.

That is the issue at the QB position, whether you consider the starter to be Tyrol Taylor or the fifth overall pick in this years draft, Justin Herbert, is meaningless. No matter who takes over, it is undoubtedly expected to be a downgrade from Phillip Rivers. When considering the positives and negatives in regards to Austin Ekeler, one thing is for sure, there isn’t a better RB on the depth chart, and that alone makes me want to hop on the Ekeler hype train rolling into 2020.

Ekeler In, Gordon Out

Boy, last year, featured one of the craziest offseason in-terms of newsworthy information. That was headlined by Gordon’s offseason hold out that eventually leaked into the 2019 season. It was a decision that cost Gordon a total of four games. That allowed Ekeler to step up and show that he can be the guy at RB after many debated whether it would be him or Justin Jackson. We all watched as Gordon’s holdout came crumbling down like Angela and Andy’s relationship in The Office.

During that span of four games, Ekeler put up insane numbers for your fantasy football teams. In terms of touches, he averaged 6.25 rushes per game, while averaging an incredible 14 targets per game. In PPR formats, he averaged 20.75 fantasy points per game, which made him an RB1 for fantasy during that stretch. As Gordon came back, it became more of a time split. However, Ekeler continued to receive a majority of the targets. He made quick work of defenses and tormented them through the air. The stat table below highlights just how efficient he was without Gordon in the rotation.

Due to his hot start with Gordon holding out and his continued success with him, Ekeler finished the year as RB4 overall in PPR formats. The Chargers made it a point to get Ekeler the pass-catching work as he was sure-handed and electric with the ball in his hands. It not only made for fun television but was also fun for your fantasy teams (unless you played against him, of course).

With Gordon gone, I expect to see more improvements on Ekeler’s rushing numbers moving forward. The other RB’s on the depth chart (Jackson and Kelley, both mentioned above) are not the answer on the ground. Not to mention the Chargers invested a lot of money into Ekeler, so I expect a hike up in carries. However, I expect his receptions to drop as the situation behind center in no longer as pretty as it once was.

The Quarterbacks Could Chop Up Ekeler’s Value

The only real concern I have for Ekeler is with his QB situation in 2020. Right now, it’s anyone’s guess as to who will be starting for the Chargers in week one. It could be the veteran Tyrol Taylor or the unruly youngster that the Chargers just drafted fifth overall, Justin Herbert. Either way, you look at it, there is going to be a downgrade for Ekeler. It’s not as if Phillip Rivers was so great last year; it’s because I’m not confident in either of these options in 2020. Who knows what Herbert will do beyond that.

It’s safe to assume that Taylor will be the guy to start the year based on what HC Anthony Lynn said before the draft. Per CBS Sports, Lynn said of Taylor starting, “[he’s] in the driver’s seat.” Taylor is a mobile QB that likes to run and has done so at every stop in his NFL career. Those types of guys typically don’t love checking down to the RB (Ekeler, in this case). Going back a few years too when Taylor was the starter for the Buffalo Bills, and I found that he reinforces that stereotype.

From 2015-2017 (three years), Taylor was the starting QB for the Bills. At that time, he threw a total of 1,236 passes. The most targets the starting RB at that time, Lesean McCoy ever received, was 77. In total, McCoy received only 184 of those 1,236 attempts. In other words, McCoy wasn’t a massive part of the passing game with Taylor under center. The table below breaks down the attempts by Taylor and the targets received by McCoy during that time frame.

If Herbert is the guy from day one, I don’t know what will happen as he has never played in the NFL. What I do know is that last year the Chargers made a concerted effort to line Ekler up all over the formation and get him the ball. They were manufactured touches in the passing game, and no matter who is under center, I expect that to remain the case. For argument’s sake, the Bills hardly did that with McCoy in that three-year time frame. However, Ekeler will undoubtedly suffer from a drop off in targets. We don’t know exactly how much he will lose yet.

Ekeler is going to be a game-changer for a lot of dynasty fantasy football teams as he wasn’t drafted as an RB2 or better in any draft before this year. While the QB concern is a viable one and scares me, I think it only dings his value a little bit. It was already super unlikely he would repeat as the RB4 overall in PPR formats anyway, but I think you can expect him to be a top 16 option in PPR formats.

I also don’t think he is a guy you should sell after this year if he performs the way I think he will. He is 24 soon to be 25 and still has at least a few more years of good fantasy production. Just like Rich, Matt, and Garrett have spoken about on the Dynasty Nerds Fantasy Football Podcast, Ekeler fits the definition of a #2to3yearwindow RB. If you can capitalize on his value next year, I wouldn’t fault you. However, he’ll be worth more in two years, and that’s when you should look to capitalize on his value.