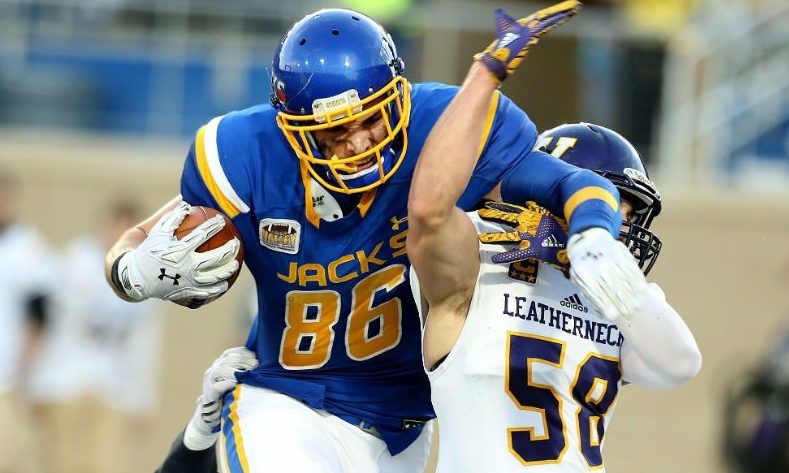 In an incredible 2017 Tight End Class, a small school no-name from Ashland University rose up the ranks before ultimately being selected in the 2nd round of the draft. Adam Shaheen hadn’t even played football for long, having been a basketball recruit. However, scouts were impressed with his physical attributes and his domination of the Division II ranks. Enough so that they took him so high in the draft.

Pretty much all of the above can also be said for Dallas Goedert. A 6’4” 250 pound TE for South Dakota State, Goedert excelled at the college level. A walk on because of his basketball background, Goedert proceeded to catch 92 footballs for 1,293 yards and 11 TDs in 2016, followed by 67 receptions for 1,068 yards and 6 TDs in 2017. It seems like football was always in his blood however, considering he was named after the Dallas Cowboys.

This has led many to wonder if he’s the “Next Matchup Nightmare”. If you watch his highlights, you will be amazed at how agile and dexterous he is for such a big body. He’s fast, nimble, and incredibly well balanced. His balance can be attributed to his parents teaching him to ride a unicycle from such a young age. There can also be no doubts about his hands. Some if his catches are absolutely absurd. One handed grabs were a norm and would often soar up to pin point passes surrounded by numerous defensive players.

Of course, outperforming players at the FCS level and the NFL are too very different things, and will certainly take an adjustment. That shouldn’t stop teams from investing a high pick in him however. According to NFL.com’s Chase Goodbread, “Scouts project Goedert as a second-day pick in the draft (Rounds 2-3), possibly the first taken at his position. They see the speed, quickness and balance of a big-play threat, and size that will make him a mismatch for smaller defensive backs. Meanwhile, his blocking has developed enough to be placed in the asset category.”

Speaking of Goedert’s athleticism, it is anticipated that he will run a 4.65 40-yard dash, a 4.21 20-yard shuttle, has a 35-inch vertical, along with 10.25 inch hands. Goedert is looking to showcase his traits at this year’s Senior Bowl where he can test himself against superior competition. That will likely be followed by a combine invite.

The NFL is infatuated with Tight Ends that can line up In-line, in the slot, or in an off-set position. That versatility stands Goedert in good stead. Goedert is perhaps the closest thing we have to a sleeper in these days of information. Keep an eye on his combine performance to verify if he will be a draft day bargain.