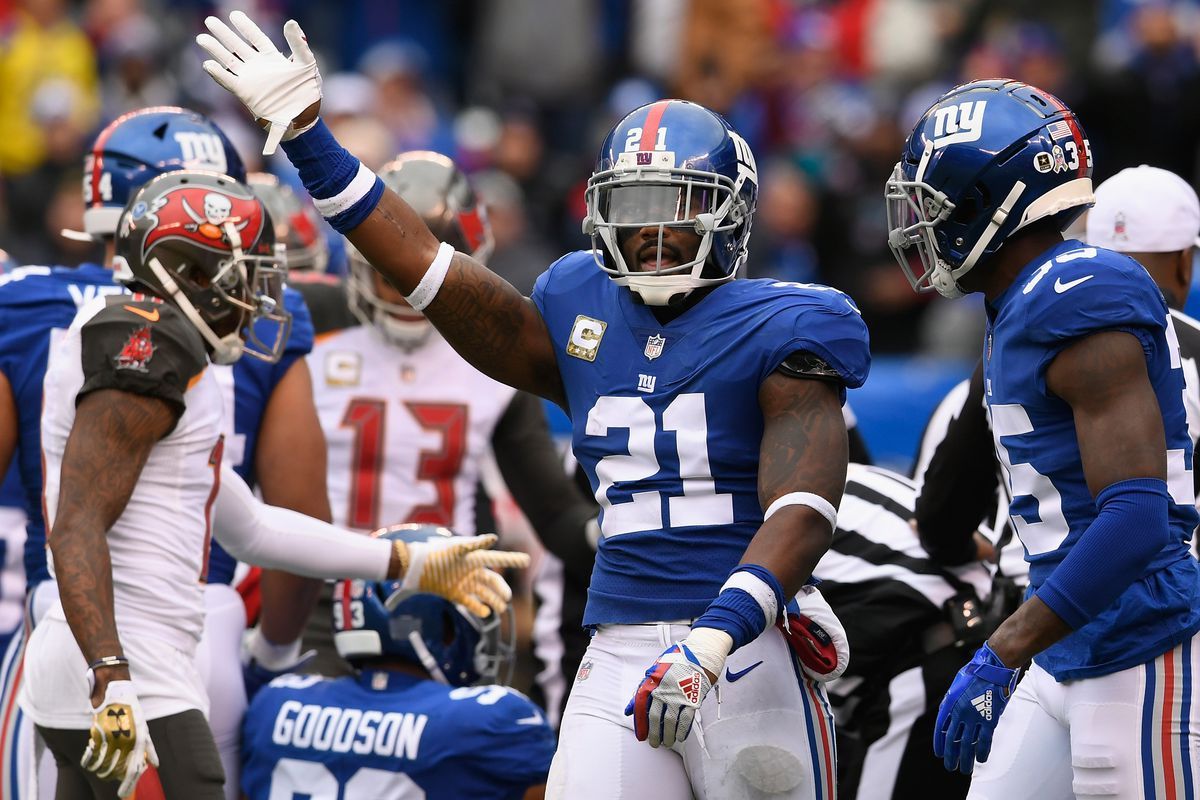 As the resident IDP guy at Dynasty Nerds, I decided to break down the 2019 free agency signings. The 2019 free agency class wasn’t as interesting this year on the offensive side of the football but for IDP players this year did not disappoint. The defensive talent available this off-season was plentiful and teams took full advantage of getting their guys. There were many to choose from but I broke down my top 12 IDP free agent signings and their dynasty impact.

I’m a big fan of the landing spot for Collins who is an elite safety. While only playing in 12 games last season with the Giants, Collins still had six tackles or more in every game except two. The Redskins lose D.J. Swearinger and Ha Ha Clinton-Dix as well as Zach Brown opening up a huge amount of tackles from a year ago. Collins should remain a top 5 DB. Assuming his big plays return closer to the level of the 2016 season, Collins could be a great buy in rookie drafts if someone is looking to move up.

Trey Flowers fits well in Detroit back with his former defensive coordinator Matt Patricia. The Lions ranked 11th in the NFL with 43 sacks a season ago and they add Flowers who has been credited for 124 regular season QB pressures the last two seasons while racking up 14 sacks. Flowers adds a much-needed edge rusher for the Lions who mainly used their LBs in that role last season. Flowers should finish the 2019 season as a top 12 DE with Detroit.

C.J Mosley ending up in New York playing alongside Avery Williamson could benefit him in 2019. Mosley has familiarity in the 3-4 defense that the Jets are projected to stay in at least for now. Mosley has had over 105 combined tackles in all but one of his five seasons in the NFL. Mosley may see a dip in production in his big plays, 7 interceptions, one sack and one touchdown in his last three seasons aren’t sustainable numbers. Mosley finished as the LB39 after missing two games while new LB running mate Avery Williamson finished as the LB13. Overall not a terrible spot for Mosley but his IDP production might be on the decline.

The Packers finally decided to spend some money in free agency and go after two productive pass rushers. In one season under new defensive coordinator Mike Pettine the Packers ranked 7th in sacks per attempt and improved their pass defense from 23rd to 12th with a patchwork secondary. Enter Za’Darius and Preston Smith who had 61 and 53 QB pressures respectively a season ago with the aggressive blitzing style of their new defensive coordinator can both see career years in sack numbers. Although the golden rule in most IDP leagues is to fade rush LBs the game is always changing. In those leagues that use the “EDGE” designation, these are two candidates that can be consistent performers all season. Although neither of the new Packers has a double-digit sack season to their name yet they have 18.5 (Za’Darius) and 24.5 ( Preston) sacks in their first four NFL seasons. Big play rush LBs are always great finds late in IDP drafts who can outperform their ADP.

Finally, Earl Thomas in Seattle saga is over and the former All-Pro Safety moves on to join the Baltimore Ravens. Thomas gets a huge payday from the Ravens who moved on after one year from Eric Weddle who finished as the DB85 in one of my favorite scoring leagues for IDP I play in yearly while Weddle was DB99 in NPLB scoring. Thomas is a very big upgrade over Weddle in less than four full games Thomas tallied 22 tackles, three interceptions, and five pass defenses. While Thomas is a polarizing impact safety in whatever secondary he plays in his IDP value is hit and miss. Thomas will always get you those big plays with interceptions but his tackle numbers are a bit too inconsistent. The Ravens likely will play Tony Jefferson in the box more to eat up tackles while Thomas plays in deep centerfield where he’s best suited. After two nasty injuries and retirement teases I’m staying away from Thomas in 2019, one more injury likely ends the career of one of the great free safeties of our generation.

Kwon has been viewed as an IDP stud since his impressive rookie year with the Tampa Bay Buccaneers in 2015. Kwon has collected 380 combined tackles, 7 sacks, 6 interceptions, and one defensive touchdown in four short years. Kwon suffered a torn ACL ending his 2018 season early and eventually forcing the cap-strapped Bucs to let him go in free agency. Alexander joins 49ers breakout rookie sensation Fred Warner who has 124 combined tackles in 2018. It’s likely Warner holds down the middle for the 49ers in 2019 while Kwon slides to the weak side backer position. I have no doubts both can remain IDP relevant in the bay area while they help a young 49ers defense grow and improve every week. Kwon has a history of missed tackles mostly due to the speed he plays at, I would temper expectations a bit this season while recovering from an ACL injury. Kwon averages just south of 100 combined tackles per season I have no doubts he will return to form and retake his spot among the top tier IDP LBs.

The Honey Badger will join his third team in three seasons. Mathieu has played nearly every position in his career in the NFL and he was used all over the place in 2018 as you can see by the graphic above. Mathieu is coming off a DB14 season in his one year with the Texans where he had 89 total tackles, 3 sacks and 2 interceptions. Mathieu heads to Kansas City where he’s likely to play mostly safety and slot cornerback. Kansas City’s Kendall Fuller (DB29) was the only DB to finish inside the top 30 in 2018. Mathieu has been consistent over his career for IDP he’s had at least 68 total tackles, one sack and 2 interceptions in four of his six NFL seasons. There should be no question that as long as the honey badger remains healthy he has DB1 upside.

As I only wanted to break down 12 landing spots for IDP this offseason I just couldn’t find it in me to leave out some of my guys who have helped me win leagues over the years even though their best days are most likely behind them.

Justin Houston leaves the Chiefs to join one of the NFL’s biggest surprise teams of 2018 the Colts. Houston always known for his big plays joins a Colts team who didn’t have one player with more than 4 sacks, over his career Houston has averaged 9.8 sacks per season including a 22 sack campaign in 2014. Houston should add much needed QB pressures for a young exciting Colts defense.

Cam Wake leaves the Miami Dolphins where he spent 10 seasons terrorizing QBs. Wake brings his 98 career sacks to Tennessee to help create an edge rush for the Titans. Although Wake is entering his age 37 season he can still be a useful IDP. Wake is another very interesting target in leagues that designate “EDGE” as his current LB designation really drops his value. Wake can have a similar season to Julius Peppers who recently retired, in 2018 Peppers was able to still pile up 5 sacks in his 17th NFL season. Now while that’s not enticing to much of the IDP community he can still put together some decent starts for you and he costs you next to nothing in a startup or trade.

Alex Okafor is coming off a two year stint with the New Orleans Saints where he played in 26 games and racked up 8.5 sacks. Okafor joins the K.C Chiefs who lost both Dee Ford and Justin Houston accounting for 22 of the teams total 52 sacks. Okafor is in a very good spot assuming the Chiefs don’t land an elite edge rusher in the draft. DE73 was where Alex Okafor finished a season ago he’s relatively cheap in dynasty leagues and a player I would be targeting wherever I could. Okafor has massive upside with the Chiefs defense who likely will be playing with a lead more often than not with their high powered offense. Okafor should see many opportunities to get after QBs and could breakout in 2019 with the Chiefs.

For the second season in a row the Packers attempt to steal a DB from their division rival Chicago Bears. It was last offseason that CB Kyle Fuller signed an offer sheet with GB before the Bears ultimately matched the offer and he returned. The Bears didn’t budge this time when the Packers offered Adrian Amos a deal. Amos has been ranked very highly by Pro Football Focus who have him graded as the 2nd best safety in the NFL a season ago. Amos isn’t very flashy but he is consistent and a very good safety. The Packers were a mess in the secondary a year ago after trading HaHa Clinton-Dix. Amos has had at least 57 solo tackles all four seasons he’s been in the NFL. Packers defensive coordinator Mike Pettine could use Amos all over the place in nickel packages. Amos finished 2018 as DB43 I fully expect him to outperform that in 2019 with the Packers.

This was by far my favorite landing spot of the IDP off season. The biggest issue with Hicks has always been staying healthy in 2018 he played 12 games which was the most games he’s played since 2016. Hicks finished last season as LB46 and moves to a great spot with the Arizona Cardinals and new defensive coordinator Vance Joseph. Joseph was last a defensive coordinator with the Dolphins before becoming the head coach in Denver. Hicks will man the middle of the 3-4 defense Joseph brings into the desert and should see tons of opportunities to finish as a top tier LB if he can just stay on the field. While Vance Joseph was with the Broncos they posted the leagues 7th highest blitz percentage at 31.5% in 2018. Hicks is a major buy for me right now as I believe a change of scenery will hopefully help him get rid of these injury issues he’s suffered early on in his career.

It comes as no surprise that joyner left the Rams in free agency after being franchise tagged just a season ago. Joyner has been a solid value for the Rams in his five year career starting 42 of 67 games, compiling 305 tackles, 5 sacks, 4 interceptions and a defensive touchdown. Joyner was the DB53 last season, this wasn’t all his fault as he played with the DB4 John Johnson III who is one of the best safeties in the NFL. Joyner shifts to Oakland who didn’t have a DB ranked higher than 94 last season (Rashaan Melvin). Joyner should have tons of opportunities to produce in Oakland in 2019 and produce a solid year for dynasty owners.

With LB being the most valuable position in IDP leagues it was only right to cover Mark Barron leaving the Rams for the Steelers. Barron has only played 16 games in three years of his eight year career. Barron heads for Pittsburgh to play under Kevin Butler as the starting inside backer in the 3-4 next to Vince Williams. Williams finished as the LB47 while Jon Bostic finished as the LB62. Barron when healthy has produced well for IDP owners averaging nearly 97 tackles per 16 games played. Barron should see enough usage to keep Bostic off the field. Barron could be a sneaky find in startups this off-season as he is very likely to outperform his ADP as long as he can stay on the field.