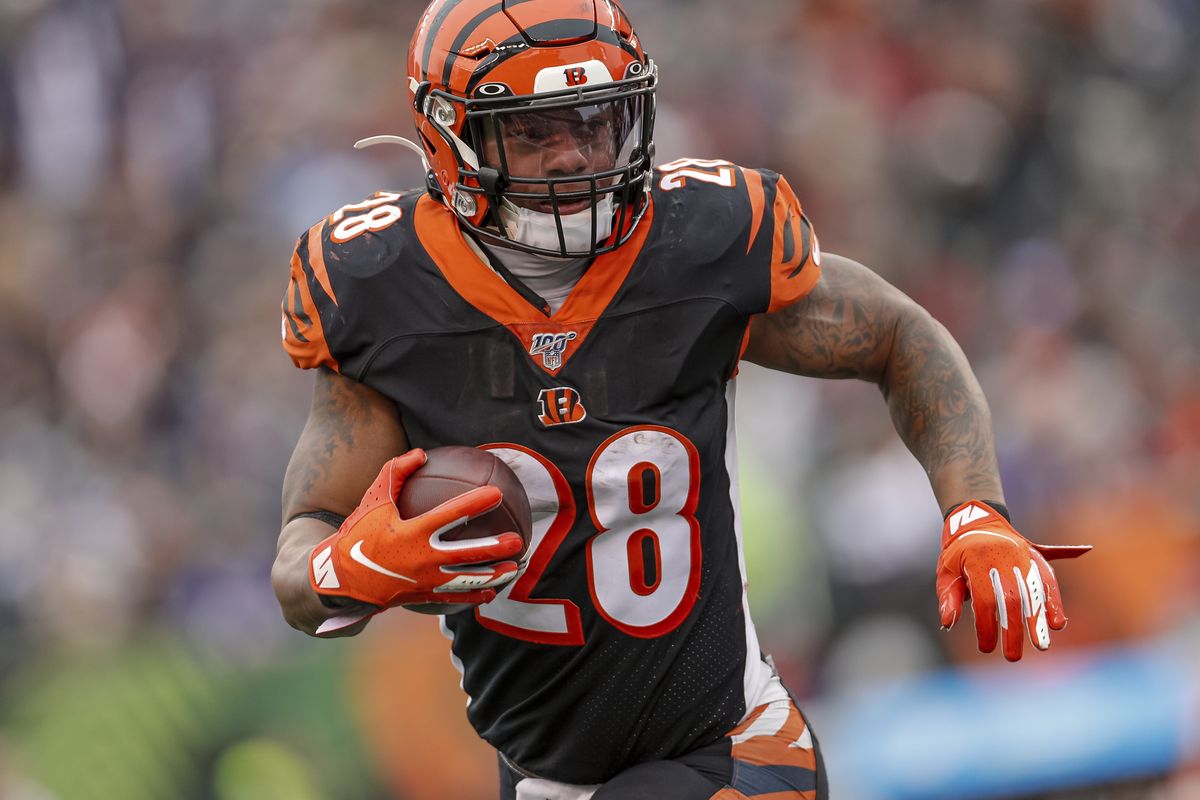 What motivates a player to outperform expectations? That extra fire can come from many different places. A player might be motivated going one on one versus a player they respect or have looked up to for years. I’d imagine playing on the same field as Emmitt Smith or Barry Sanders would have felt that way for most young RBs. Also, playing against a division rival can stir up emotions that could motivate a player to be at one’s best. However, another catalyst that could provide a little extra motivation for any athlete is financial security.

According to Statista and Career Trend, the average career length for running backs is about 2.57 years. The NFL average of career years is at about 3.3 years, with kickers leading the way at 4.87. Because of the competitive landscape and high injury rate, the turnover at positions like running back and wide receiver is very high. Most careers are cut short due to injury or simply being cut by the team. This puts into perspective that an NFL career is never guaranteed to last beyond that first rookie contract. Therefore, if a player is finally eligible for an extension or is in the last year of their contract, they will be extremely motivated to over-perform for their financial security.

Below I will highlight three running backs that are expected to be free agents after 2020. Each of them is unique, and we will explore whether they are worth keeping on your roster past their current NFL contract. Before we get started, I wanted to thank everyone that participated in my buy/sell polls on twitter, as well as Sean Fournier (@seant4nier), who provided his data set of player contract information. Any additional contract information is from Spotrac and Over The Cap.

Contract Situation: Kenyan Drake signed his transition tag worth $8,483,000 back in March, which is fully guaranteed through the 2020 season. This makes him the 5th highest paid RB in the league.

Fantasy Outlook: Kenyan Drake experienced a tale of two halves in 2019. He started the year off with the Miami Dolphins, where he averaged 11.5 touches per game, and a pedestrian 9.1 fantasy points per game (PPR). That slotted him at RB37 for the first seven weeks of the season. He was then traded to the Arizona Cardinals for a conditional 2020 sixth-round pick. He joined a young Kliff Kingsbury offense led by rookie QB Kyler Murray.

After being traded to the Cardinals, Drake saw his usage spike significantly, starting in week 9. His touches per game increased by 64% – averaging nearly 18.9 touches per game. During that time, he was the RB4 only behind Christian McCaffrey, Derrick Henry, and Ezekiel Elliot, averaging 19.9 PPR points per game. As you can see above, he was at least an RB2 in 75% of those games, while finishing as an RB1 37.5% of the time. Drake was a league winner in the back half of the season, and we could see more of this in 2020. With the addition of DeAndre Hopkins, a more experienced Kyler Murray and Christian Kirk, and the return of Larry Fitzgerald, this Cardinals offense could produce multiple fantasy-relevant players with Drake as their workhorse RB.

Kenyan Drake is considered an immediate contributor in the eyes of the fantasy community. He is a clear “buy” for any playoff contender, but a potential “sell” for anyone that’s rebuilding. Drake is already 26 and, for now, is only tied to the Cardinals through 2020. But despite being in the league for four years, Drake is still a “fresh” 26 years old after only accumulating 600 touches with Miami and Arizona. For reference, Christian McCaffrey, who signed an extension this off-season, has had 926 touches in 3 years. Assuming Drake remains in Arizona beyond 2020, he could be a value at his current dynasty ADP of RB19. As a contender, I would buy with confidence knowing he can help my team in 2020. I understand that his ADP and value could plummet if he signs elsewhere in 2021. As a rebuilding team, I would hesitate to buy Drake. I would try to sell him to a contender in a package to acquire a younger RB that fits my rebuilding window.

Fantasy Outlook: Similar to Kenyan Drake, Joe Mixon had a very disappointing start to the 2019 season. However, unlike Kenyan Drake, who was being drafted as the RB30 in dynasty, Mixon was being drafted as the RB6. Many expected Mixon to be a cornerstone for many dynasty teams. So when he started the season (prior to their bye week) as the RB31 in PPR, many dynasty owners were likely wondering if they made a mistake drafting and buying Mixon at such a high price.

However, after the bye week, Mixon was a completely different player. Zac Taylor fully committed to Mixon by giving him the opportunity to succeed. Per Graham Barfield, fantasy expert from Fantasy Points, Mixon’s routes run per game increased from 16.3 to 22.6 after their bye week. In contrast, his overall touches per game jumped from 15 to 24.1! Also, he accounted for 83% of the Bengals red zone RB touches during that same period, which is an increase from 69% prior to their bye week. From weeks 10 to 17, Joe Mixon averaged 18.2 PPR points per game; he was the RB4 the last eight weeks of the season, finishing as an RB1 62.5% of the time.

What’s even more impressive is that Mixon was able to produce despite playing behind the 26th ranked offensive line per Football Outsider’s Adjusted Line Yards metric. In fact, Joe Mixon was one of the most elusive players in 2019. Per Player Profiler, Joe Mixon evaded a tackle on 32.9% of his touches, resulting in a league-leading 103 evaded tackles. Of his 1,138 rushing yards, 50.6% of those were yards created after the first broken tackle – which was 2nd most in the league.

For 2020, I fully expect to see the “post-bye-week” version of Mixon. He will enter the season with some new pieces on the offensive end after the Bengals drafted Joe Burrow and Tee Higgins to boost the offense. In addition, Mixon’s offensive line should be improved as well. Jonah Williams (Bengals’ 2019 1st round pick), who suffered a torn labrum last offseason, will provide a much-needed boost to the offensive line. With an improved overall team and another year in Zac Taylor’s offense, Mixon should be very productive for fantasy owners.

We see a very similar trend from the fantasy community in this poll. Joe Mixon is an obvious “buy” candidate for all contenders at 86.4%; however, that declines slightly to 65.5% when a team is considered to be in a rebuild. Unlike Drake, who saw his polls flip completely, Mixon still has quite a bit of appeal for rebuilding teams. This is likely due to his already proven track record of RB1 potential while still only being 23 and having yet to hit the prime of his career.

However, one primary concern is Joe Mixon’s reported plan to hold out if an extension is not reached (per Yahoo Sports). Keep in mind that we saw this exact scenario playout with the Los Angeles Chargers. In 2019 the Chargers could not agree to an extension with Melvin Gordon.

After signing with the Denver Broncos, Gordon admitted to regretting his decision to hold out for four games (per Sports Illustrated). Gordon declined an initial offer of $10 million per year from the Chargers only to sign a short-term $8 million per year deal with the Broncos.

It is possible Mixon learns from Gordon’s mistake and eventually commits to playing the full season. However, it is something that fantasy owners need to consider when buying Mixon. He may be unavailable to start the year. Either way, Mixon should be a buy candidate for most fantasy teams, especially if you can acquire him at a discount due to his contract situation.

Contract Situation: Kareem Hunt signed his restricted tender with the Cleveland Browns, which will earn him $3,259,000 in 2020. He will be an unrestricted free agent in 2021.

Fantasy Outlook: While in Kansas City, Kareem Hunt showed us that he could be an every-week RB1 for fantasy teams. Hunt averaged the 7th most PPR points per game at 19.46 from 2017 to 2018. However, several off-field issues caused Hunt to be cut by the Chiefs late in 2018, and then miss most of 2019 due to an eight-game suspension. As a result, there was quite a bit of uncertainty surrounding his dynasty value and fantasy production going into 2019. He would be joining a seemingly loaded offense with Baker Mayfield, Odell Beckham Jr, Jarvis Landry, and Nick Chubb, with no room for opportunity.

As you can see above, after his return from suspension, he was very much involved in the Browns offense. In PPR, from weeks 10 to 17, he was the RB17 averaging 12.7 points per game. He was at least an RB2 62.5% of the time while averaging about 5.4 rushes and 5.5 targets per game. You might wonder, how did Hunt’s involvement affect Nick Chubb? Before his return, Chubb was the RB6 averaging 19.25 rushes and four targets per game. With Hunt involved, Chubb’s opportunity dipped slightly to 18 rushes and 2.1 targets per game, finishing as the RB15 during that time. In addition, Chubb’s snap percentage dropped from 73.3% to 64.2% after Hunt returned. Both Hunt and Chubb can coexist in the same backfield. However, they will continue to cap each other’s upside going forward.

For 2020, the Browns will be led by Kevin Stefanski, who was hired as their head coach after a long tenure with the Minnesota Vikings. He was, most recently, their offensive coordinator in 2019. When asked about Nick Chubb and Kareem Hunt (per CBS), Stefanski raved about both running backs. He mentioned that it is a “good problem” to have two extremely talented players and plans to “use them in the right way.” The usage between the two players will be something to monitor. Still, if 2019 was any indication, both Chubb and Hunt can be fantasy relevant players in 2020.

Like Mixon and Drake, Hunt seems to be a clear “buy candidate” for most contending teams at 73.9%. Even for rebuilding teams, 66.1% of fantasy owners would still buy him despite the risk that comes with Hunt. However, one factor to consider is his discounted price compared to Mixon and Drake. At an ADP of 7.05, he is priced as a flex RB that could provide RB2 production.

It is important to note that Nick Chubb himself is approaching a contract year in 2021. It is unlikely that the Browns extend Hunt to a pricy contract. If he does become an unrestricted free agent in 2020, Hunt will have the upside of potentially signing to a new team with a workhorse RB opportunity. At his current price, I would buy Hunt. He has the fantasy upside of an RB2 (potentially RB1) and his ADP appropriately factors in the risk that comes with the player.

Conclusion – When to Buy or Sell?

These are just 3 of many running backs that are approaching a contract year in 2020. Leonard Fournette, Dalvin Cook, Aaron Jones, and Alvin Kamara are a few others that headline this loaded RB free agency class. However, with this article, I wanted to provide a spectrum of three players that are slightly different in career production, level of risk, and price/ADP. Based on the research and polls above, here is a quick recap of when you should buy and sell contract year RBs:

Hopefully you found this article helpful as you approach the off-season and prepare for 2020. Follow @FF_MarvinE on Twitter for more articles, and @DynastyNerds for more dynasty and fantasy content all year round! Thank you for reading!