Is th time right to put these veteran quarterbacks on the trade block? @Halbs4 highlights three to move before they lose value. 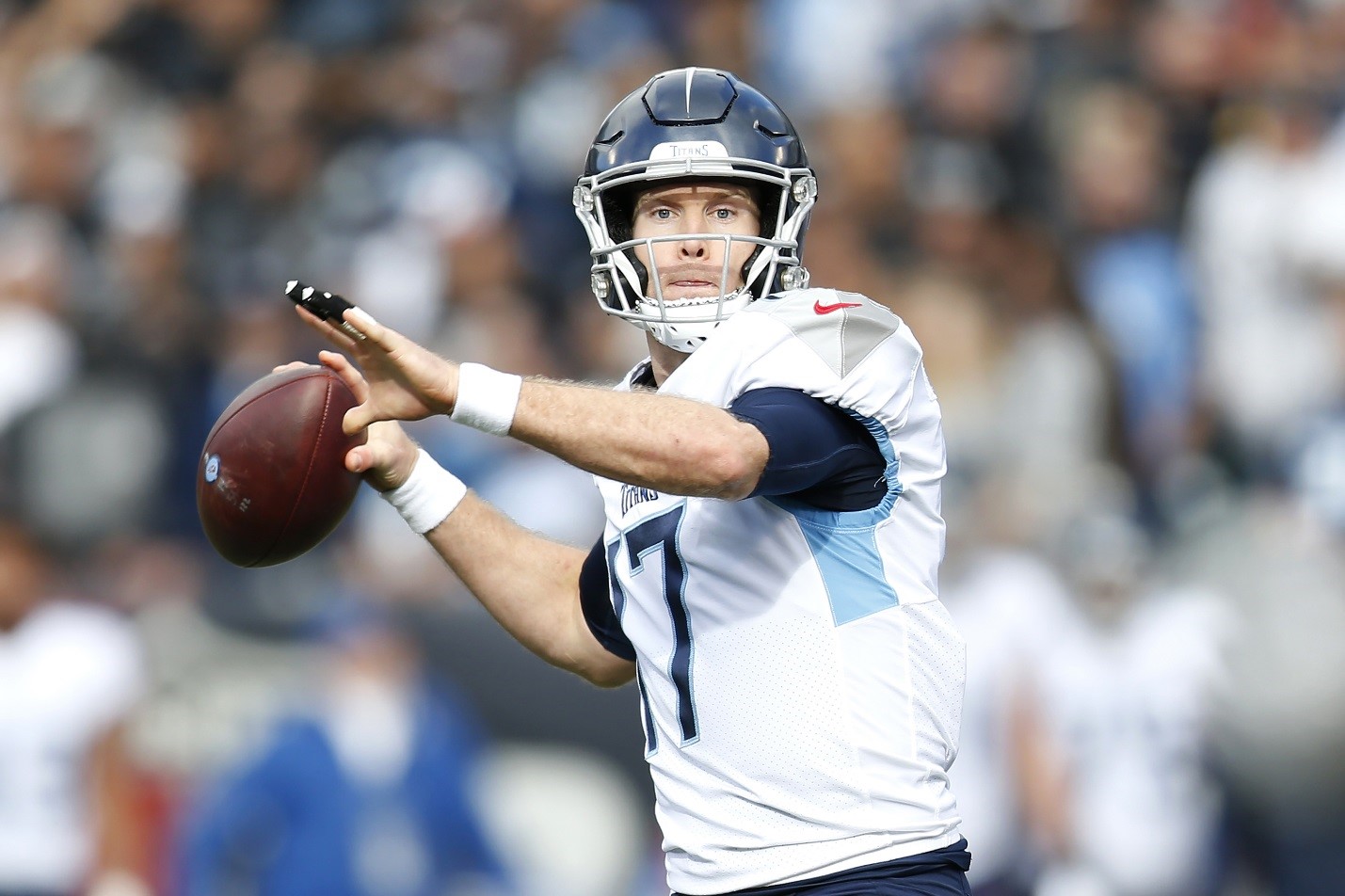 What Ryan Tannehill was able to accomplish in 2019 was nothing short of remarkable. After being outcast from the Miami Dolphins and signing as a backup to Marcus Mariota, Tannehill was able to take of the starting QB job and lead the Titans to an AFC Championship game by beating the Patriots and the Ravens. He also won the Comeback Player of the Year.

After that performance, Tannehill earned every penny of his four-year contract extension that he signed this offseason, or did he? The quarterback might be the highest-paid and most glorified position on every team. But, we all know the real reason for the Titans miraculous playoff push was their rushing attack lead by Derrick Henry. The Titans chose to franchise tag Henry this offseason, putting his long-term future in doubt and the future of Tannehill’s production in doubt as well.

Tannehill’s numbers in the ten games he started last season are nothing short of remarkable (all stats provided via Pro-Football-Reference). On a per-game basis, Tannehill completed 18.8 of his 27 attempts per game for a completion percentage of nearly 70%. While still throwing for 259.8 yards and 2.2 touchdowns per game.

Tannehill was crazy efficient in his ten games last year. He was second in the league in TD%, with a 7.7% rating, which was trailing only Lamar Jackson. He was also first in yards per attempt, adjusted yards gained per attempt and yards per completion. In terms of fantasy production Tannehill was able to post an absurd 22 points per game over a 16-game season that would put Tannehill at a total of 352 points or last years QB2. No, that’s not a typo, at the rate only Lamar Jackson would have outscored him last season. That kind of absolute insane efficiency is nearly impossible to replicate and primarily due to the presence of a dominant run game.

In the ten games, Tannehill started Derrick Henry, played in nine. In those, Henry rushed for 125 yards per game and gaining nearly six yards per carry. That kind of rushing attack will draw seven, eight, even nine defenders in the box, consistently allowing for Tannehill to be extremely effective in the passing game. The last time an NFL rushing leader repeated that feat was in ’06 and ’07 when LaDainian Tomlinson accomplished the feat. History is not on the side for Derrick Henry to repeat his dominant season, which will likely hurt Tannehill’s efficiency this upcoming season.

Tannehill currently doesn’t have a significantly high price tag associated with him. He is only being taken as QB27 in 1QB leagues and is lower than the Dynasty Nerds Rank of QB22 in 1QB leagues. He would probably be a tough sell in leagues of that format. The real place to cash in on Tannehill is in 2QB and Superflex leagues. Nobody is going to pay top five value for a QB who only started ten games last season. However, finding someone who would pay high-end QB2 value for him should not be a challenge. Selling Tannehill right now in the QB18-QB12 range would not be a bad idea. Targeting players in that range like Sam Darnold, Daniel Jones, and Drew Lock could be a smart move. Going after some of these younger QBs that have high ceilings could be a game-changer for your dynasty team for years to come.

Coming off a down year for the Los Angeles Chargers, Phillip Rivers signed a one-year deal with the Indianapolis Colts. While this fit is a reasonably good one, Rivers can thrive off the strong offensive line and running back play; it doesn’t increase Rivers’ stock much.

Rivers is going to be turning 39 during the 2020 season. His age is starting to show on the playing field with struggles to elude pressure and push the ball downfield. The Colts didn’t believe in Jacoby Brissett to lead the team long term, so they brought in Rivers on a one-year deal. Then the Colts drafted Jacob Eason in the 4th round of this year’s NFL Draft. Although Rivers expects to be the team’s starter for the 2020 season, it won’t last long. If the Colts find themselves out of playoff contention early, don’t be surprised if they give Eason a shot to prove himself near the end of the season.

2019 was not the best year for Phillip Rivers on the field. He saw the second-most attempts of his career at 591 and completed 390 of those attempts for a decent completion percentage of 66.0%. The volume he saw this year was the only reason he was a relevant fantasy asset.

Rivers finished with the third-lowest touchdown total of his career of 23 while still throwing 20 interceptions. Though he wasn’t quite up to the Jameis Winston 30/30 season, comparisons were being made between the two throughout the season and into this offseason as well. He was ranked 26th in the league in terms of TD% and 3rd in INT%. Watson finished the year as QB18 solely because of the yardage he was able to rack up in a pass-happy offense. In 2019 the L.A. Chargers attempted the 11th most pass attempts with 597 attempts on the year.

The Indianapolis Colts attempted the 25th most pass attempts with only 513 on the year. Moving from a high-volume type offense in L.A. to a run-first team in Indy will hurt Rivers in the sense that his volume is going to decrease. If you took away 84 pass attempts from Rivers last season, he would come in with 203 fantasy points, essentially tying Andy Dalton for QB26. Dalton only played in 13 games last season. Rivers is a volume passer, and his value will take a hit due to lack thereof in Indianapolis.

By no means is Phillip Rivers, a hot commodity in dynasty fantasy football. Once again, trying to sell this caliber of player in a 1QB league will be futile. However, in 2QB and Superflex leagues, there is value to be had.

The move here is a hold and see move. Hold onto Rivers till the season begins and see what happens to his production. The selling point for Rivers is going to be extremely situational. If a playoff contender is simply a second QB away from making it over the hump, sell Rivers. If one of your league mates has a top tier QB with little depth and they go down to injury, sell Rivers. Is the person who took Jacob Eason in your rookie draft looking for immediate value? If so, sell Rivers.

Selling Phillip Rivers is going to be up to you to identify a situation where a team has a sudden need for a fill-in QB that can put them in a better situation. When that situation arises, be willing to get a deal done quickly. Getting a 2nd or 3rd round pick in next year’s rookie draft is a massive win for any Phillip Rivers owner or even a player on their bench who has done nothing, but you have faith in.

Deshaun Watson was doubted by some when he entered the NFL, but it didn’t take long for him to prove the haters wrong. This is just one of those situations where the people around him hamper a player.

In an all-time head-scratching move, the Texans traded away DeAndre Hopkins this offseason for 28-year-old running back David Johnson. If Johnson can find some of his younger self this season, it may help take off some of the pressure Watson is under almost every game. However, losing a weapon like Hopkins is a detrimental blow.

The Texans traded for Brandin Cooks and now have a plethora of speedy wide receivers for Watson to use. They still have yet to find an answer for Watson on the outside. Hopkins had some of the best hands in the league and was an absolute weapon in the red zone and on 50/50 balls. Losing that caliber of player will only hurt a quarterback’s value.

The only quarterback to finish in the top five at the position in 2018 and 2019 is Deshawn Watson, coming in at QB4 both years. Watson had similar numbers in back to back seasons, attempting around 500 passes for 340 completions with 26 touchdowns and only nine interceptions in 2018 and 12 in 2019. Watson has been nothing but a stud quarterback since entering the NFL, aside from the knee injury that cut his 2017 season short. The catch here is that Watson is going to have to figure out how to put up top-five QB numbers without one of the best receivers in football. In 2019 Watson targeted Hopkins a massive 150 times, completing 104 of those passes for 1165 yards and seven touchdowns. In 2018 the went for 115 completions on 163 targets, 1572 yards, and 11 touchdowns.

On a per-target basis, Watson generated slightly more fantasy points in 2019 when he targeted someone other than Hopkins. In 2018 Watson was far more productive when targeting Hopkins than his other receivers. One could argue that the disparity in 2019 was solely based on the fact that in the red zone, Hopkins drew double coverage quite consistently. That double coverage opened up the middle of the field for Watson to find his tight ends. Those tight ends contributed to 9 of Watson’s touchdowns and .104 of his fantasy points per target. The absence of such a dominant outside threat will decrease Watson’s effectiveness in the red zone.

Selling Deshaun Watson in any dynasty league format sounds downright insane. Though now is as good of a time as ever. Nobody knows how Watson will perform in a world without Hopkins though some are willing to take that risk.

Watson does have a good amount of rushing statistics to keep his floor in the QB1 tier. However, quarterbacks need to put up passing stats to be a true top-five quarterback. Selling Watson at this top-five level is likely to bring in a haul. Getting a similar quarterback in return like Russel Wilson or Dak Prescott is not out of the question either. Bumping down a tier to acquire someone like Baker Mayfield or Carson Wentz plus draft capital; that is where the real value is. The lower end QB1’s with high ceilings could net you a first-round pick as well. Barely giving up much in overall production at the QB position and a high-end draft asset at another position is a smart move to set yourself up for the future.