In this edition of 2020 Regression Candidates see why @halbs4 is selling three wide receivers who finished in the top 20 last season. 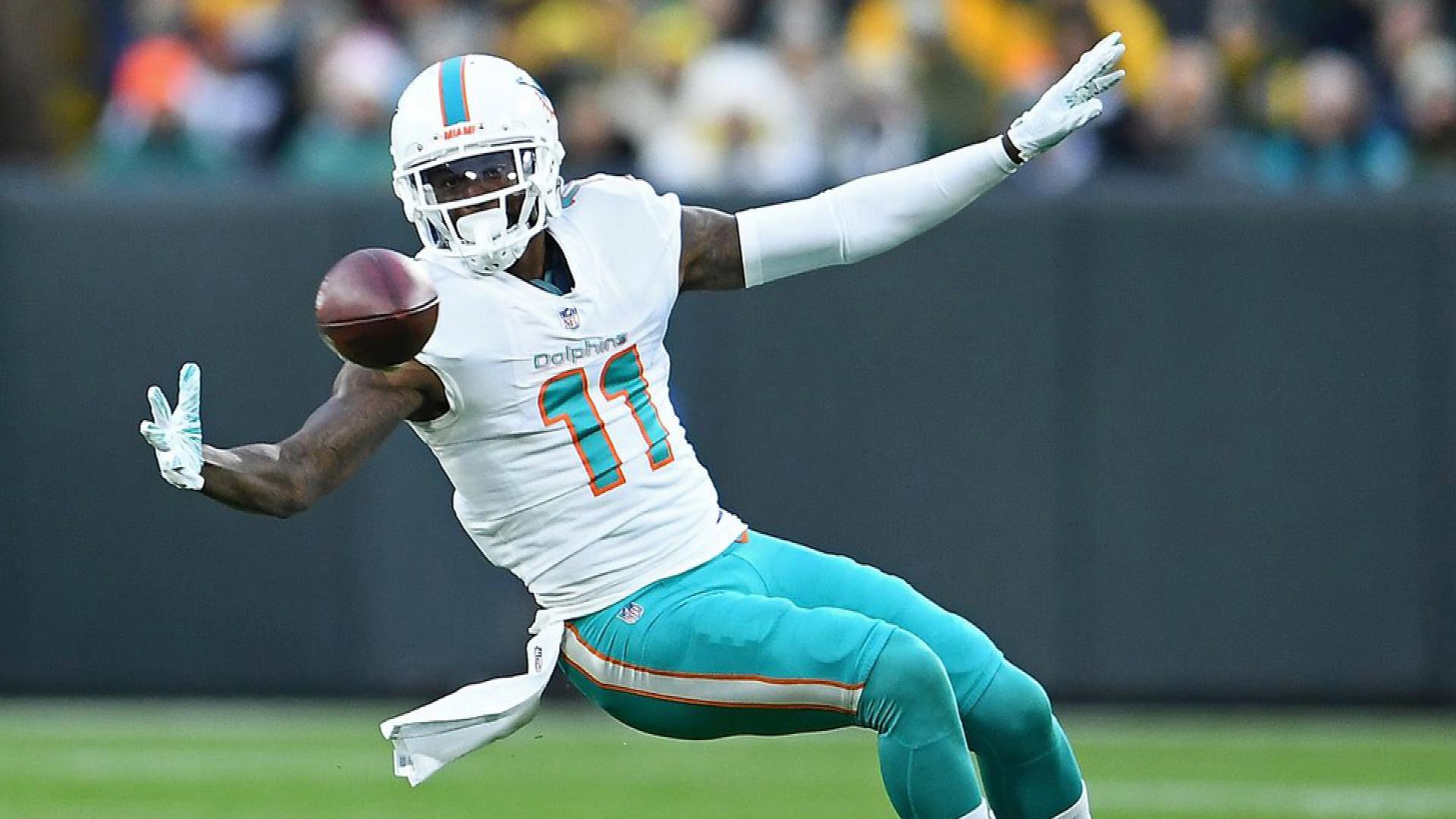 DeVante Parker is coming off your typical 5th year wide receiver breakout season while playing for the Dolphins who were tanking in the 2019 season before it even started. His performance last season earned him a new four-year contract extension, tying him to the Dolphins through the 2023 season. Parker thrived last season from a strong connection with a veteran QB in Ryan Fitzpatrick and a lack of competition for targets. Opportunity is king in fantasy football, and Parker had every opportunity imaginable to succeed. However, the 2020 season could prove to be more difficult. The Dolphins selected Tua Tagovailoa in the 2020 NFL draft. While Fitzpatrick could start the season as the team’s starter, it’s only a matter of time before the Dolphins give Tua Tagovailoa a chance to prove himself. A change in quarterback to a rookie would not bode well for a 27-year-old wide receiver.

Parker is also likely to see a hit in his volume in the passing game for two reasons. First is the emergence of Preston Williams and Mike Gesicki. Two young and athletic options that the Dolphins are likely to utilize early and often. Secondly, the offseason additions of Jordan Howard and Matt Breida and the selections of two offensive tackles in the draft. Those additions show that the Dolphins are committed to building a better rushing attack, which creates less volume in the passing game.

All stats provided via Pro-Football-Reference

In 2019 the Dolphins attempted 615 passes, which tied them for seventh-most in the league. On the flip side, the Dolphins rushed the ball a dead last 349 times last season. In 2020 expect the Dolphins to correct this disparity, mainly if they let an inexperienced rookie take the helm. Less passing volume in an offense would lead to less volume for Parker to produce on.

Last season Parker saw 128 targets, which he turned into 72 receptions, 1202 yards, and nine touchdowns. Every single one of the stats was a career-high for Parker. Before 2019 Parker never saw over 100 targets and never eclipsed 60 receptions. He never gained more than 800 yards or scored more than four touchdowns. Before 2019 he never played a full 16 game season. The 2019 season was very much an outlier in DeVante Parker. Pair that with the expected decrease in volume Parker is going to see, and he projects to be a low-end Flex option at WR. Not the WR2 or WR3 range, he is being valued as.

The ideal time to sell DeVante Parker was immediately following week 16, but his window is not yet closed. His value is not at the WR1 numbers he was putting up last season, but selling Parker as a high-end WR3/low-end WR2 should not be a problem. Flipping the 27-year-old for someone like Mike Williams or one of these highly touted rookie receivers would be a great scenario. I see the best opportunity to sell Parker would be part of a package deal to upgrade at a position. Pairing him with another WR2 could easily net a middle-tier WR1 like DJ Moore. The same could be done for upgrades at other positions like RB or even QB in Superflex leagues. DeVante Parker came on like a bullet last season, but for me, he is leaving my dynasty rosters just as fast.

Over the past three seasons, Keenan Allen has been nothing short of dominant. A player finishing as a WR1 for three straight seasons is precisely what every dynasty team needs to take their team to the next level. So why does Allen’s name pop up in this article? The first change in the situation that bodes for the worst is, similar to the DeVante Parker. The Chargers drafted quarterback Justin Herbert in the first round of the 2020 draft. They also let Phillip Rivers walk in free agency. Rivers had a below-average year in 2019, but if there’s one thing he could do, it was pepper Allen with target after target. The change from Rivers to Tyrod Taylor or Justin Herbert likely means Allen will see a decrease in target share.

The next change, similar to the Dolphins, the Chargers are likely going to focus more on the rushing attack. Both Tyrod Taylor and Justin Herbert are mobile, athletic quarterbacks capable of escaping the pocket and producing on the ground. This likely takes away from Allen’s volume because with Rivers under center and the pocket breaking down, he would immediately look for his safety nets, either Allen or Austin Ekeler. The Chargers selected running back Joshua Kelley in the fourth round in the draft, have the third-year running back Justin Jackson primed for more carries, and signed Austin Ekeler to a new four-year contract this offseason. This all points to more running plays and less passing plays and less volume for Keenan Allen to produce.

The final situation that could prove detrimental to Allen’s dynasty value is that he is a free agent following the 2020 season. I would not be surprised to see the Chargers resign him to another multi-year deal. However, when players are entering contract seasons and have had multiple significant injuries, it is not uncommon for teams to let them walk. Allen will be turning 29 next off-season, making it even more difficult for a team to justify paying him.

Keenan Allen’s numbers speak for themselves 130+ targets, around 100 receptions, almost 1200+ yards, and six touchdowns for three years in a row. Giving him finishes at WR3 in 2017, WR12 in 2018, and WR6 in 2019. The most impressive stat is that he played all 16 games in those three seasons after having season-ending knee injuries back to back years before this stretch. What has made Allen so dominant is his insane volume. 159 targets in 2017, 136 targets in 2018, and 149 targets in 2019. The reasons why this won’t continue into 2020 are the changes at quarterback and overall team play selection.

The market for Keenan Allen should be bountiful and rightfully so. His startup ADP of WR16 is slightly below what the Nerds have him ranked at, WR12, but at both of these prices, I am currently selling Allen. After what he has done the past three seasons, it should be no issue selling Allen to a contender or a team trying to vault into the playoffs. Targeting younger receivers like AJ Brown, DJ Moore, or Courtland Sutton in a one for one deal is not a bad option for people only looking to make their roster younger. In a rebuild, Allen could be sold for a great rookie receiver like Jerry Jeudy and could still net some draft capital on top of Jeudy. The options are endless when it comes to selling Allen. Just make sure that the return reflects a low-end WR1 value, and you will not be disappointed.

Let’s address the prominent factor in this situation immediately; Stefon Diggs. This offseason, the Bills pulled off one of the biggest trades and sent multiple draft picks to the Vikings in exchange for Diggs. Whenever a team adds a true WR1 to their roster, it’s hard not to project a hit onto the teams’ other receiving options. John Brown is no exception to this rule. While Diggs likely draws the most interest from opposing defenses, he will still command his fair share of targets. A decrease in target share will likely lead to inconsistency from Brown in terms of production. He projects to become more of a boom or bust player as his ability to connect on deep passes is superb, especially if he goes against opposing defense’s second corners. But the consistency that comes from intermediate and short routes will likely be handled by Diggs and Cole Beasley.

The Bills have the mantra of being a run-first team, and their offseason addition of punishing back Zack Moss proves that in 2020 that will not change. Apart from the Moss and Diggs additions, not much has changed on the offensive side of the ball. Josh Allen can still do it with his arm and legs. Singletary and Moss project to be a nice 1-2 punch for that running game. Diggs should be the focal point in the passing attack. Beasley will get a share of targets, and Dawson Knox is likely to take a step forward as well. None of this bodes well for Brown to see a large enough target share to produce consistent fantasy numbers.

In 2019 the Bills attempted 513 passes, 8th lowest in the NFL. Rushing the ball 465 times, 6th most in the NFL. They replaced Frank Gore with 5’9″ 223-pound Zack Moss. They still have Devin Singletary, who averaged over five yards per carry in 2019, and Josh Allen attempted 109 rushes on his own.

In 2019 John Brown saw a team-high of 115 targets. In his five seasons with the Vikings, Stefon Diggs saw an average of 107 targets per year. Cole Beasley is still there and saw 104 targets. Devin Singletary took away 41 targets in only 12 games. Dawson Knox saw only 50 targets but is likely to see his role expand in his second year.

In 2019 Brown came in as WR20 in PPR formats and had career highs in targets, receptions, and yardage. His WR20 finish marked the second time in his six-year career, where he finished above WR45. The first time was in 2015 for Arizona.

In the 2019 offseason, the Bills vacated a league-low 35 targets or only 7.2% of their target share. Along with that comes 263 air yards and only three targets inside the ten-yard line (vacated target and air yard stats provided via Rotoworld).

Let me ask you a simple question: Is John Brown more likely to finish the 2020 season as WR20 like last season or lower than WR45 like almost all of his previous seasons?

The market for a 30-year-old wide receiver is likely to be slim in the first place, but there is still hope. Browns’ current ADP of WR40 is almost 15 spots higher than the Nerds Ranking of WR54. Players in the WR60 – WR50 range I would rather have than John Brown: Dionte Johnson, Mecole Hardman, Curtis Samuel, Parris Campbell, Van Jefferson, and Anthony Miller. The lowest picks I would expect for John Brown are 3.08 in this year’s rookie draft, 2021 3rd, or multiple 2022 3rds/4ths. Last week, in one of my dynasty leagues, I saw John Brown and a 2020 3rd round pick sold for a 2021 2nd and 3rd round pick. The options are out there. You have to find the right owner in the right situation with the right assets to get a deal done for John Brown.

.@DynastyPrice and I will be at the @seniorbowl next week. First timers! Can't wait.

@DynastyNerds Building a dynasty WR warchest. Do you think this order is right based on Dominator app value?

He’s got a point

@DynastyNerds @DynastyRich @DynastyMatt @DynastyPrice Matt loves Justin Jefferson so much, he picked an extra Justin and an extra Jefferson #nerdherd