With the 2020 season right around the corner, @FF_MarvinE reviews the rookie WR opportunity landscape heading into the season. Which rookies can we expect to produce this season? 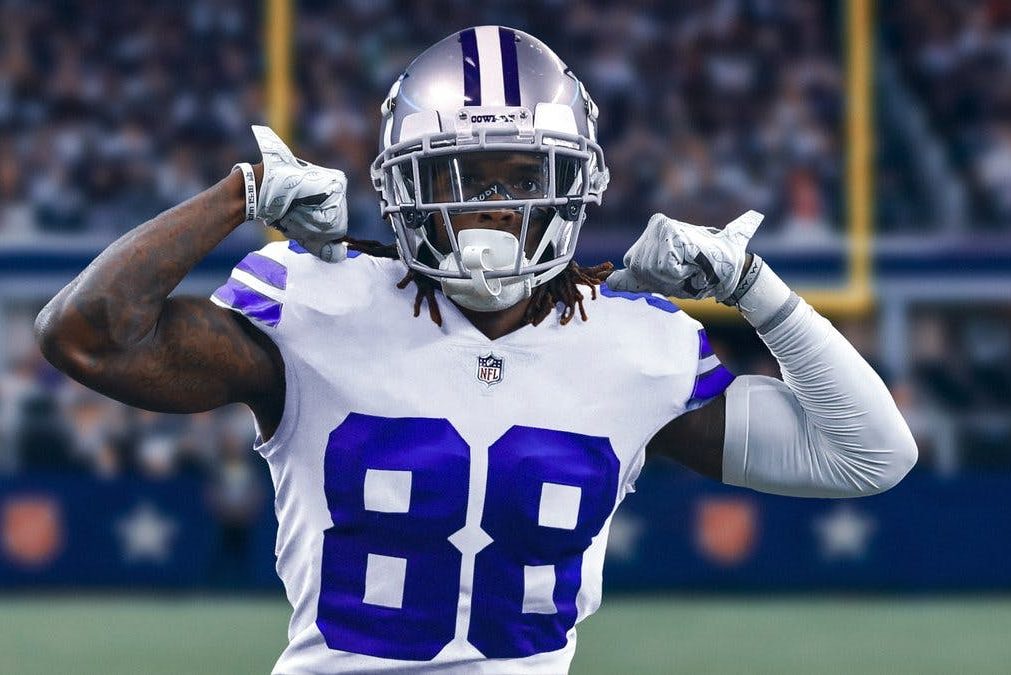 In the fourth installment of the series, we shift our focus to the rookie WR opportunity landscape. The 2020 draft was one of the deepest WR classes we have seen in a while. In fact, in this year’s draft, we saw the 2nd most WRs drafted in the first three rounds since 2000 (16). And while draft capital and talent are crucial to a rookie’s immediate success in the NFL, opportunity is equally important. In short, the recipe for a rookie’s immediate impact for fantasy football is:

If you are new to this series, here is a link to my initial list of ideal WR landing spots before the draft. In this article, we will review how each of these teams addressed the WR position in the first three rounds of the draft (if at all). Which rookie WRs are set up for immediate fantasy production? Let’s dive in!

Here is my initial list of landing spots with Lead WR opportunity:

And finally, here is a list of landing spots that I projected for WR2 opportunity:

After the initial wave of free agency signings, there were very few players remaining that I viewed as impact free agents or trade targets. The only WR on this list:

You will notice immediately that the Houston Texans should no longer be on this list. Considering they received a 2nd round pick in the DeAndre Hopkins trade, I assumed that they would use one of their picks to draft a promising rookie WR. Instead, they flipped one of their 2nd round picks for Brandin Cooks, who will likely assume the lead WR role.

Curtis Samuel is another player that was projected to be a trade target for a WR needy team. It sounds like he will remain with the Panthers at least for one more season before approaching free agency. If the Panthers are unwilling to extend or re-sign him, it is still a possibility that he is traded prior to the deadline. For now, he will line up with D.J. Moore and Robby Anderson in a revamped Panthers offense.

New York Jets: The New York Jets drafted Baylor WR Denzel Mims with the 27th pick in the 2nd round. Mims is an athletic receiver, boasting a 96th percentile speed score (115.6) and a 90th percentile burst score (131.0). In addition, Mims scored the 4th highest #NerdScore among all WRs (77.40), only behind Lamb, Jeudy, and Reagor. Combine his athleticism with his outstanding route running, and you have a player that could emerge as the WR1 for the Jets.

Mims landed on a team that should provide plenty of opportunities, with 186 vacated targets available this coming season. Unfortunately, he recently suffered a hamstring injury, which has kept him sidelined for an extended time. Keep an eye on his recovery. For now, I still have him projected to finish behind Jamison Crowder in targets, though I could see Mims emerging sooner if he proves to be healthy.

Philadelphia Eagles: Alshon Jeffery has struggled with injuries, and DeSean Jackson is likely nearing the end of his career. Therefore, the lead WR role for 2020 and beyond is up for grabs in Philadelphia. In a loaded WR class, the Eagles used the 21st overall pick to draft Jalen Reagor out of TCU. Reagor is a dynamic WR with a 77.58 #NerdScore, which is 3rd highest in this WR class. One of Reagor’s strongest traits is his ability to create yards after the catch. He is an explosive playmaker with the ball in his hands, which bodes well for his chances to produce this season.

As for his landing spot, the Eagles have 128 vacated targets heading into the season. Long-term, Reagor will be linked to an ascending, young QB in Carson Wentz. Short term, Reagor’s breakout may have to wait since he recently suffered a shoulder injury, which may sideline him for at least four weeks. In addition, I expect this offense to run through Ertz and Goedert. However, both TEs will be free agents after the 2021 season, leading to more opportunities for Reagor.

Minnesota Vikings: The Vikings traded away Stefon Diggs for a package that included the 22nd overall pick in this year’s draft. With that pick, they selected LSU slot, WR Justin Jefferson. Jefferson is one of the savviest route runners in this class, boasting the 3rd highest route running #NerdScore among all of WRs.

Questions still remain as to where Jefferson will line up for Minnesota. I expect him to operate out of the slot similar to his 2019 season at LSU when he compiled a nation-leading 111 receptions. In 2019, per PFF, he was also 2nd in forced missed tackles (24) and 1st in explosive plays (37) from the slot. Considering his ability to separate and generate yards after the catch, I fully expect Jefferson to contribute for the Vikings immediately.

The following teams were not on my initial list of ideal landing spots, mainly due to their offensive scheme and recent moves to address the WR position. However, as you can see above, each team spent significant draft capital on a top WR. Let’s review some of the WRs on this list that could produce immediately:

Dallas Cowboys: The Dallas Cowboys were seemingly set at WR with Amari Cooper and Michael Gallup locked in for the next few seasons. That did not stop them from drafting CeeDee Lamb with the 17th overall pick in the draft. Lamb is arguably the most complete receiver in this class. He possesses a unique combination of speed, physicality, and after-the-catch ability, making him a threat no matter where he lines up. He now joins a crowded WR corp led by Cooper and Gallup.

However, the good news is that the Cowboys have the 2nd most vacated targets heading into the season (190). Realistically, all three receivers could finish with 100+ targets. And assuming Dak is re-signed, the future for Lamb is very bright. It is important to note that Cooper’s recently signed contract is extremely front-loaded. After 2021, his contract will have no guaranteed salary, making it very easy for the Cowboys to move on if they choose to do so. And with Gallup entering free agency after 2021, Lamb could become the WR1 in this offense as soon as 2022.

San Francisco 49ers: A run-heavy offense that already features George Kittle and Deebo Samuel, the 49ers were not on my list of ideal landing spots. However, they would trade up to draft Brandon Aiyuk (14th highest WR #NerdScore) at 25th overall. When watching Aiyuk, his quickness and burst after the catch stands out immediately. In fact, Aiyuk led the class in yards after the catch per reception (9.9). He is an explosive receiver in open space and should find plenty of room to operate in the Shanahan offense.

Unfortunately, both Deebo and Aiyuk are missing time due to injury, so monitor their recovery and practice activity as we approach the season opener. For this season, I expect Aiyuk to battle Deebo and Kendrick Bourne for targets behind Kittle. And for dynasty, he could certainly carve out a consistent role as soon as next season. Regardless, Kittle and Deebo will be around for the foreseeable future, likely capping Aiyuk’s long term upside.

Denver Broncos: Courtland Sutton took a significant Sophomore leap, but that did not stop the Broncos from adding to their WR corp. They would use their first and second-round picks to draft Jerry Jeudy and K.J. Hamler, two extremely dynamic receivers. Hamler is more of a speedster with tremendous speed variation skills, while Jeudy is the route technician that can get open anywhere on the field.

While not lacking in talent, Jeudy and Hamler will likely struggle to gain consistent targets in this offense. The Broncos will enter the season with only 78 vacated targets (10th lowest in the league). So for both rookies to be immediately productive, Drew Lock will need to pass quite a bit more in this new Pat Shurmur offense. I do expect an uptick in pass attempts, but not enough to make all three receivers weekly fantasy starters. And unfortunately for dynasty purposes, Jeudy and Hamler will be slightly capped as long as Sutton remains in Denver.

The 2020 season has yet to begin, but it’s never too early to look ahead! Let’s evaluate two potential landing spots for yet another impressive WR class.

Detroit Lions: Kenny Golladay and Marvin Jones will lead this team in receiving this season. However, they are both on expiring contracts and will be unrestricted free agents next off-season. Over The Cap projects both receivers to make upwards of $10 million per year. And with only $37 million in cap space, the Lions might only sign one of them. This leads me to believe that they could turn to the draft to reload their WR corp. And with Stafford locked in for the foreseeable future, a rookie WR could thrive in Detroit.

Green Bay Packers: After neglecting the WR position yet again this off-season, the Packers can take advantage of another talented WR class. While Davante Adams has been nothing short of dominant when healthy, the need for a more talented WR2 is evident. Adams is under contract through the 2021 season, and Lazard will be an unrestricted free agent after this year. Unless Equanimeous St. Brown or MVS emerges this year, they will need to add to this WR corp. While the Packers project to be a more run-heavy offense, there should be plenty of targets to sustain at least two relevant fantasy receivers.

Keep in mind that opportunity is only one component of the equation for success. If A.J. Brown taught us anything last season, it’s that we should never fade talent simply because of their situation. While Reagor and Mims have a clear path to targets, do not forget that Lamb and Jeudy are two of the most talented receivers in this class. Stay tuned as I release the next article in this series, recapping the QB opportunity landscape. And as always, you can find me on twitter @FF_MarvinE. Also, be sure to follow @DynastyNerds for more articles from the team!

And if you haven’t already, check out our DynastyGM tool, which allows you to conveniently manage your dynasty teams all in one location! Upgrade your #NerdHerd membership for $4.99 to gain access, or purchase the tool separately for $2.99

Moving on Up? Fournette to Tampa Bay
Scouting a Wide Receiver with Some Experts