Writer Tyler Moss debuts for Dynasty Nerds with his 2021 Sophmore running back projections. Tyler discusses impactful rookie running backs from 2020 with a quick overview and projections on each back’s 2021 potential season production. 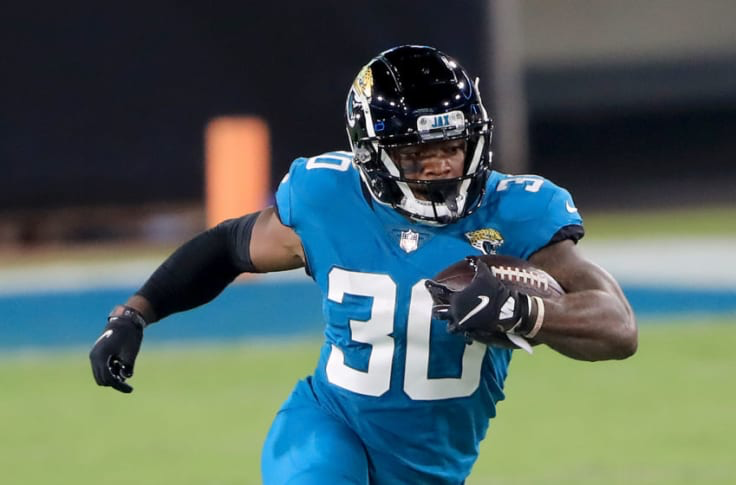 Hello! Welcome to my 2020 rookie class recap and predictions article. I’m confident you’ll enjoy hating it if you’re reading this in 2022 or have woken up from a year-long coma and think I’m insane for having Jacksonville Jaguars running back James Robinson in the top 10 for the 2020 season. First up is the most exciting position, the running backs!

This article intends to be informative and beneficial for the 2021 season. I aim to help you ride the breakout rookies wave. Let me first start by sharing the rookies’ stats from their first season in the NFL before I go and make any outlandish remarks or projections for what they’ll do next.

Most of the projected finishes for this class of running back’s in the offseason were very far off what we witnessed during the 2020 season. While a player like Jonathan Taylor shined in his projections, others like JK Dobbins, Cam Akers, and Clyde Edwards-Helaire disappointed fantasy owners. While we can’t re-draft these players with the new information at hand, we can evaluate their respective seasons and project it forward into 2021.

With that said, here is a full re-ranking of the 2020 rookie running back class. Evaluations of the 2020 season and a look at what to expect in 2021 are included! Let’s kick it off with the top five RB’s of the 2020 class!

Taylor is a generational talent who will surpass his marks from the 2020 season. He’s the only rookie to eclipse 1,100 yards rushing. Besides Taylor, only one other rookie running back reached 1,000 yards rushing. He posted 36 receptions while competing with RB Nyheim Hines for targets. Oh, and Taylor led all rookie rushers in total TDs.

Taylor greatly benefited from teammate and fellow RB Marlon Mack’s injury at the beginning of the season. He immediately filled a starting role and shined. Sustaining his success should be no problem for Taylor, even with Mack returning for a one-year deal with the team.

It’s worth noting, Taylor’s fantasy finish may have benefited from the lack of players healthy at the running back position. More than three high-profile names suffered injuries keeping them out of multiple games, while others were disappointing due to the circumstances surrounding them. Still, it would be best if you didn’t take away from the fact that this was still a phenomenal rookie season. It illustrates an excellent baseline for future production from Taylor.

Swift’s sporadic 2020 season ended pleasantly as he finally began to take shape without head coach Matt Patricia in his way. He’ll be a vital piece of the puzzle under new head coach Dan Campbell. The fiery coach has already endorsed Swift as a three-down workhorse for the Lions. The ex-UGA standout showed glimmers of stardom during his first year in the NFL, proving he could carry a large workload if prompted.

Unfortunately, RB Kerryon Johnson is still under contract and will be vying for touches with Swift, and the team has taken a step back. If the Lions continue to develop with their youth, I could see a situation where they run with Swift and use Johnson as the change-of-pace back. If he averages a 60% snap share, a pace he maintained in the closing four games of the season, I can see Swift finishing as a top-15 running back.

Though averaging only 46.4% of snaps per game, Gibson still finished as the RB12 in 2020. That’s primarily due to his 11 TDs in just 170 attempts rushing. Gibson also had 36 reception off 44 targets but failed to register one receiving TD. While maintaining a volume of 11 rushing TDs may seem unreasonable, the upswing in receiving TDs is more than enough to make up for the volume loss.

While Gibson split snaps with fellow RB J.D. McKissic last season, it’s evident that Gibson’s progression and the capital spent on him will make him the lead back for Washington moving forward. He’s in a position where his snaps won’t go near as low as in his rookie year.

The continued decrease of RB Mark Ingram’s involvement towards the end of last season, coupled with his recent release, opened doors for Dobbins. Now, many believe a breakout in 2021 may be inevitable. However, I am much more concerned for Dobbins as he’s still competing for touches in the RedZone and short-yardage situations.

The roadblock comes in the form of RB Gus Edwards. With Ingram hanging around for a large part of 2020, Edwards finished as RB28 in standard-scoring leagues. A crucial part of that success was his 6 rushing TDs.

From week seven on, Dobbins averaged 53% of snaps in nine of ten games played. Being just above the 50% line with Ingram basically out of the picture is a sign that the Ravens aren’t ready to hand over the keys to the backfield. It illustrates that they aren’t sold on Dobbins being a workhorse running back.

While Dobbins eventually took the lead role from Ingram, he didn’t take over the whole backfield. I see an uptick in his receiving game next season. However, I can’t see him passing other RBs in the class.

Akers burst onto the scene in the final weeks of the 2020 regular season. He saw a 67.25% snap share in the last four started games of his rookie campaign. Akers showed he could be the primary back in a committee style we saw used the vast majority of the Rams season.

Head coach Sean McVay is not one to shy away from a workhorse back. Remember, up until this year, McVay counted on workhorse production from RB Todd Gurley. Without question, the Rams will steer in this direction with the display put up by Akers in the back end of the season and the playoffs.

With RB Malcolm Brown expected to depart the team, there’s only two options in the backfield: inconsistent RB Darrell Henderson or Akers. With Henderson’s role diminishing towards the end of 2020, it’s unlikely he’ll compete with Akers and his fantasy production. Expect more of what Akers teased us with in the backend of last season.

Best of the Rest:

The 2020 campaign for the loan, 1st round running back, could be described as disappointing. While Edwards-Helaire eclipsed over 1,000 combined yards, he was well off the predicted massive season we’ve come to expect from first-round selections. The Chiefs were seen as a bulletproof landing spot. People thought that any running back that landed there would be an RB1 immediately. That’s the position Edwards-Helaire was put in. Not to mention, his injury-riddled end of season made his rookie season more of a question mark.

While starting the season off with seven straight weeks of double-digit points, his swift decline leading to RB LeVeon Bell’s addition brings me great concern. I’m not entirely disappointed with Edwards-Helaire’s season. However, with the Chiefs showing a lack of confidence in him, it’s hard for me to rank and expect high production. With this taken into account, I still believe that he has the RB1 upside, but it’s reasonable to expect another RB2 season.

There are two massive question marks when it comes to Robinson and his upcoming 2021 campaign. Question number one is, will the Jaguars stick with Robinson as their lead back? We have seen an undrafted free-agent RB who shines in their first year with the team replaced within their rookie contract. That guy is former Denver Broncos RB, Philip Lindsay.

The second question is, will Jacksonville’s new coaching staff want to keep Robinson as the primary back going into 2021? The 2021 NFL Draft class has a few quality options that the Jaguars could look at and a few free agent guys to impact them immediately.

If Robinson can dodge both these critical questions, it would be hard not to see Robinson recreating a campaign like the one he had in 2020. He has RB1 upside as long as there’s no competition. Hopefully, that’s what the Jaguars intend on doing. My projections reflect as though they make an addition to their roster, something that’s currently rumored.

Moss will forever be a committee back, and that’s okay. The position provides upside in the range of a lower-end RB2. That’s only true as long as health doesn’t become an obstacle. While the situation isn’t horrible, it may be Moss’s most significant obstacle as the Bills don’t need a lot of production from their running backs.

The offense is a balanced pass-first system that depends on quarterback Josh Allen to run as effectively as anyone in the backfield. The team doesn’t need Moss to produce as an RB2 which means he’ll continue to be a less dependable option for your fantasy teams.

Fellow Packers RB Aaron Jones returning puts a pretty big damper on A.J. Dillon truthers. RB Jamal Williams vacating leaves some touches up in the air, but the team can and will look into drafting another piece for the backfield. Oh, and passing will still be a priority.

It’s hard for me to get around to the idea that a third-string running back in 2020 can automatically step in and be a high-end RB2. Outside of draft capital, there’s no reason for me to see this happening. Dillon carries the most comprehensive range of outcomes regarding what he could produce in 2021, but I would instead cover my bases with other positions or a more secure RB to bolster my team than taking on Dillon’s risk.

Kelley had an interesting 2020 season. Benefiting from the absence of RB Austin Ekeler, Kelley was able to put up big eye-opening numbers before eventually cooling off to a state of irrelevancy. That’s all you would’ve remembered if you were to think about Kelley’s season last year.

It’s worth noting, his most productive games were with Ekeler healthy. Injury and lack of volume closed him down in the eyes of fantasy owners, though. It’s hard for me to get around the idea that Ekeler will lose touches to Kelley, who never showed to be all that special. Kelley will be a back who only finds his relevance when he is the only available option for the pass-heavy Chargers.