A look at the top-10 rookie performers from Week 8 of the NFL. 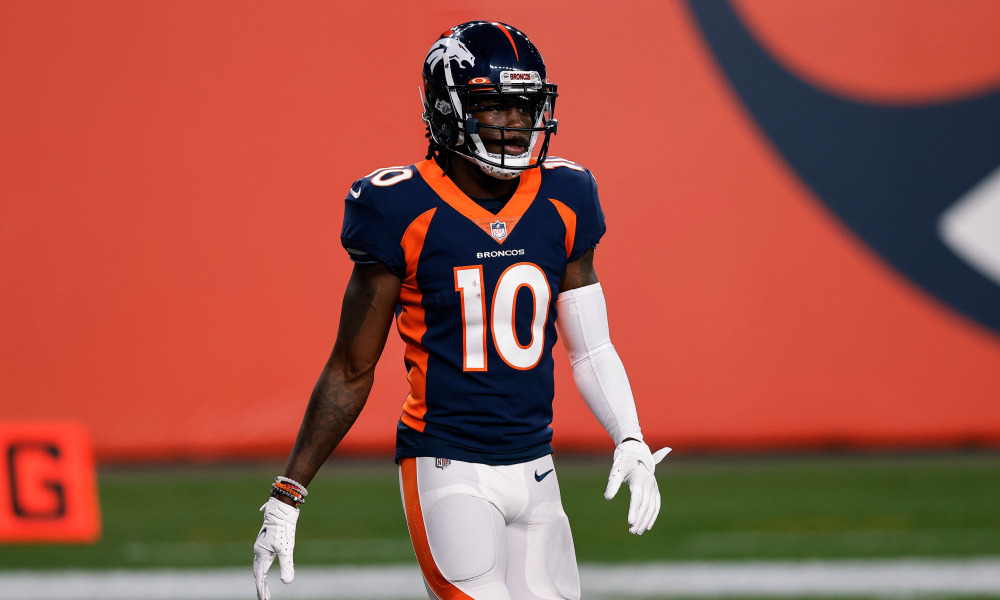 The trade deadline is approaching, and this series might be more critical than ever. Notice, I said, “series.” Looking back throughout these posts will help give you a full picture of how the rookie class has performed throughout the season. This will remind you of how these players can perform in optimal situations.

This is precisely what we have been waiting for and what we have been expecting. It is only right for this performance to happen against a weak secondary. What does the data say? This is what Jeudy has been building towards. He is involved each week, on the field for 80% or more each week, Drew Lock passed the ball 48 times, and Atlanta gives up good performances to top wide receivers. The film shows just as great of an account. On Jeudy’s touchdown grab, he made a good reception and worked after the catch through a defender to score the touchdown. On other targets, Jeudy was the primary read, used his hands amazingly well, and is effective after the reception when possible. With a better quarterback, Jeudy could be truly unlocked.

Volume is king, and Robinson has a 47.7 utilization rate, 19th among running backs, and has the seventh-highest snap share among runners, at 65.7%. He is seeing the touches and stays involved throughout most of the game. While this is all great, I am still worried that Robinson is closer to Tre Mason than Arian Foster. Foster was an outlier. Typically, we don’t see sustained success from players with Robinson’s profile. Will Robinson be another outlier?

I am not often a fan of late-round wide receivers, but Davis is someone I will continue to monitor whether he is on this list or not. Throughout this season, Davis has been a tremendous downfield thread and has been becoming more dynamic after the catch. In Week 9, Davis had a notable touchdown catch. Josh Allen was under duress, and Davis made a strong hands catch over Jamal Adams in coverage.

I miss watching Dak Prescott unlock this offense. Even on a good day, the offense still doesn’t have the same efficiency. Overall, Lamb’s highlight play and lousy play of the day came on his back to back touches. On Lamb’s first reception, he scored a touchdown when a linebacker was covering him. His next reception popped right out of his hands and into the hands of a nearby defender. Lastly, for Lamb, we should continue to monitor his snap share. Over the last two weeks, Lamb has seen his snaps drop from 70% to 50%.

Hamler was an intriguing draft pick for me. The Broncos had just taken Jerry Jeudy in the first round and had Courtland Sutton already on the roster. With this said, the opportunity was there for Hamler in Week 9. The Broncos were being aggressive throwing the ball, and there was buzz through training camp around Hamler’s playmaking ability and how he will make a “big impact” early in the season. After reviewing the film, this performance was a volume mirage. There wasn’t a spectacular play or catch for Hamler, and he will likely be relegated back to the bench when Patrick returns.

In the last two weeks, we have seen a slight changing of the guard in the Bills backfield. Moss has out-touched and out-snapped Devin Singletary the previous two weeks. In the film, Moss is a lunchpail runner. Each play is reliable and has good versatility. It is an additional win to see Moss being used not only in the backfield but also split out at wide receiver.

This was a bit of a peek into the future of the tight end position for the Saints. Unfortunately, while Trautman has meaningful touches, if we do not have enough information, he will be a role player in 2020. Today, Jared Cook is still the primary tight end, and Trautman even played behind Josh Hill.

I will admit that I was wrong on Chase Claypool. I did not think he would push his way onto the field for a larger role, and I did not believe he would take such a substantial part of the target share. Claypool is a size-speed specimen and has assumed a Martavis Bryant plus role in this offense. At any point in a game, Claypool can be a game-breaker downfield and has shown the ability to box defenders out. In Week 9, there were no big plays, but there were plenty of other ways Claypool stayed involved.

Each week I find myself daydreaming about the Detroit Lions optimizing their offensive personnel. This week is getting closer to my vision. Swift continues to be a versatile piece out of the backfield and works for the tough yards. While Swift did not find the end zone this week, he was stopped at the 1-yard line. A touchdown would’ve moved Swift into RB1 territory for the week. Similar to other players in the article, Swift is a massive buy right now. He is close to being unlocked in the offense with a higher snap share and higher-level touches.

Tough start to the day for the rookie. His first touch of the day was a fumble that should’ve been recovered by a tight end, Logan Thomas. After the bad start, Gibson split touches for the rest of the game with veteran J.D. McKissic. Outside of the ugly fumble, Gibson’s tape looks great. He is a versatile piece in the backfield and has enough juice to be one of the NFL’s top running backs. For people who are only boxscore watching, I would try to acquire Gibson before the trade deadline aggressively.

The breakdown this week finally sees another tight end added to the mix. At this point, we do have a few notable names who have fallen off the map, looking at you, Clyde Edwards-Helaire. With this in mind, don’t forget about the players who are fading. These players fading can create great last-minute buy windows before the trade deadline. By being proactive with these forgotten souls, we can increase the long-term value of our team.