A look at the top-10 rookie performers from Week 10 of the NFL. 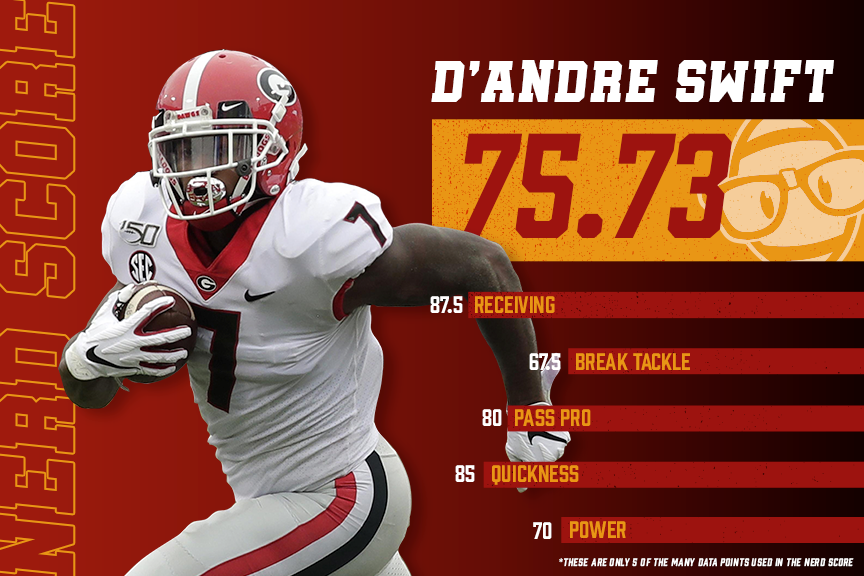 It finally happened; the Detroit Lions offense finally realized they have one of the best running backs in the league on their team and used him appropriately. In his first start, Swift did not disappoint. He was effective between the tackles, showed plenty of to the outside, and was used as a receiver. Swift’s highlight play of the day was on his touchdown reception. With Stafford in the shotgun, Swift was split outside at wide receiver. Swift ran an inside out route, made a great hands catch, turned upfield, and displayed good power to get into the endzone.

Even in a limited role, Gibson is effective and productive in Washington. In Week 10, Gibson saw his lowest snap share since Week 6 but still saw one of his highest utilization rates of the season. Zooming out, Washington views Gibson as a weapon that is most effective when fresh. On the field, Gibson looked good on all of his touches. He caught the call well, was used on the goal line, and beat a defender to the outside for one of his touchdowns.

The 2020 Pittsburgh Steelers offense is entertaining to watch each week. They aren’t afraid to abandon the run and rely on Ben Roethlisberger to carry the team. For Chase Claypool, more specifically, he is given both schemed up touches and can use his athleticism to get open. While the ceiling is very high for Claypool, I want to improve his hands as he develops. In my opinion, Claypool allows the ball to get into his body too often and needs to rely more on his hand strength.

The connection between quarterback Joe Burrow and Higgins looks so easy. To make matters easier, the Pittsburgh Steelers didn’t want to play tight coverage on Higgins. For this reason, Higgins had soft coverage against him on most of his targets. Even Higgins’ touchdown reception was fairly uncontested. Playing the X, Higgins ran a simple dig route with two other wide receivers on his side. The defense got caught up in the traffic, and Higgins was easily able to score.

Another solid performance for Jefferson in Week 10, and it shouldn’t be a surprise. The Vikings have three obvious targets and very little middle class that can give sustained production. For this reason, Jefferson has enjoyed a large target share. For the week, Jefferson did not work a lot after the catch. Most of his work either came on the sidelines or in situations where there wasn’t much room to work. Jefferson worked well with the space that was available and made clutch plays along the sideline.

Another situation where there aren’t quality options surrounding Aiyuk and Aiyuk being given all the targets he can handle. This actually reminds me a lot of the old Shanahan and Kubiak offenses where there is a primary X receiver who sees a large target share, and there are just a few other role players who might chime in. Something to monitor with Aiyuk will be his target depth and where he is being utilized on the field. In Week 10, he was used frequently in the middle of the field and on short passes. This works to Aiyuk’s strengths and limits the big plays downfield that other wide receivers might have.

Unlocking Michael Pittman is something I have been hoping for all season with TY Hilton dealing with injuries and an overall lack of other roster options. In Week 10, Philip Rivers was frequently looking for Pittman, and Pittman was ready for the challenge. He worked both outside and in the slot and also was physical after the catch. Pittman won’t be a burner off the line, but allowing him to build up speed and deliver hits will be a key to unlocking his potential.

Ahmed was an undrafted free agent with the San Francisco 49ers and has managed to work his way into a prominent role with the Miami Dolphins. Unfortunately, Ahmed’s role does not look to be much more than a fill-in, but this can still be valuable for the season’s remainder. In the film, he looked good. It was very similar to what I saw in his college tape. He isn’t a blazer but gets to top speed quickly and has a smooth change of direction. I hope Ahmed has the opportunity to showcase what he can do over the remaining weeks of the season.

Touches are not the problem when zooming out at Robinson’s production. He has been involved in the rush game, and with Chris Thompson injured, he will be involved more in the receiving game. In Week 10, Robinson’s production looks good, but his biggest play of the day, 20-yards, came on a run where he fell, defenders thought the play was over, and he was able to get up and go for an additional 10-yards.

We were blessed with a great week, and most of the players being talked about in this post are in the top-50 skill position players on the week. Unfortunately, we have one outlier. Wright is an undrafted big-bodied wide receiver out of Temple. Watching the film, Wright is not someone I would expect to be a waiver add or long-term hold. He did not show good explosion or long speed, and he did not display much after the catch.

One of my dynasty golden rules is “the cheapest time to buy a stud is during the rookie draft.” I find values in rookie drafts can be all over the place, and there are many sources for information people can consume. If you had multiple shots in 2020 rookie drafts and were following the Dynasty Nerds rookie rankings, you likely have found yourself with multiple blue-chip additions to your team.