The Dynasty Nerds staff brings you round 3 of the last 1QB mock before the NFL Draft. 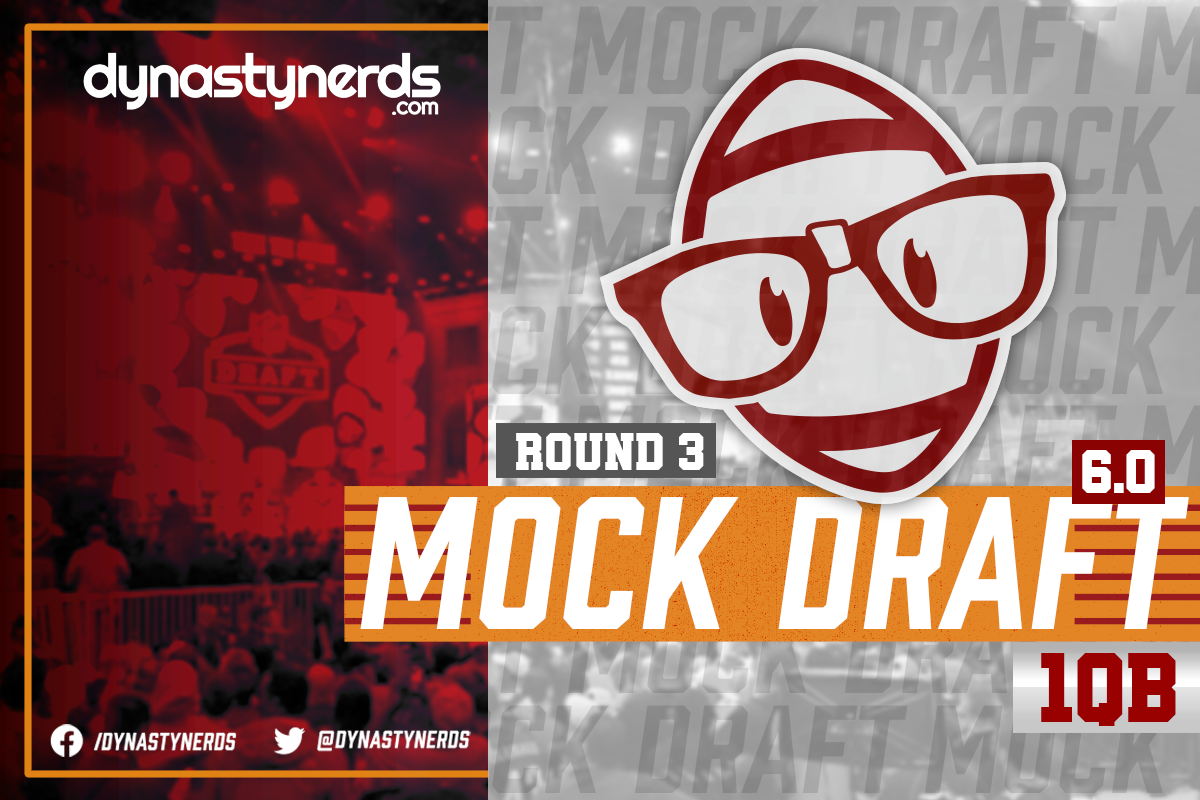 Kylin Hill is super shifty and elusive with great hands out of the backfield. This was an easy pick for me, seeing he is very underrated.

From lighting the world on fire in 2019, Chuba Hubbard has fallen quickly in most analysts’ rankings. The vision and footwork that looked so promising in 2019 were suddenly absent. For a third-round pick, I’m happy to take a chance that he finds his footing in the NFL. Great ceiling, very low floor.

I’m quite excited to land Pat Freiermuth in the third round. I am undoubtedly surprised he made it this far. Freiermuth’s a big guy that can use his body to get the position. He’s a pretty good blocker, especially when compared to the other tight ends in this class. The thing I love most is his ability to line up outside. A trend that’s been growing in the NFL for quite some time now. He’s an excellent route runner with great hands. He also has excellent field awareness and a good feel for the game.

Seth Williams has incredible ball-handling skills, and he can make some of the best contested catches you’ll see. While he doesn’t have elite speed, his recent pro day answered enough questions that make me feel great about acquiring him in the middle of the third round.

Drops were a problem for Williams during his last season at Auburn. Much like the offense as a whole, he had an inefficient and up-and-down 2020 season. However, he most certainly has the athleticism to be a quality NFL receiver and asset for your dynasty team. Great flier for this point in the draft.

I love Eskridge as a flier at this point – the lack of breakout age and his age in and of itself are huge red flags. However, what he can do is bring an incredibly versatile weapon to an NFL offense. I love D’Wayne Eskridge, and he has a chance to make some noise on Sundays!

The NFL game is very unforgiving to the body, and Trey Sermon has one that’s ready to take some hits at the next level. Sermon showed his ability to be a feature back at Ohio State this year when they couldn’t get anything going in the passing game against Northwestern. He flashed the ability again versus Clemson. The only thing holding Sermon back is his ability to stay on the field. Draft capital will play a role in where Sermon lands in rookie drafts, but everything is a dart throw in the third round. Why not take a chance on him here?

As a junior, Jarret Patterson rushed for 1,000-plus yards and 18 touchdowns in five regular-season games! History shows day three running backs are more likely to hit than wide receivers. Eskridge was snagged a couple of picks earlier, making it easier not to second guess my strategy.

Dazz Newsome has the athleticism, instincts, and hands to be a weapon out of the slot for an NFL team. Once he earns the opportunity, he’ll be a reception magnet in the league. Oh, and that would make him a steal at this point in rookie drafts.

Tamorrion Terry brings excellent length and burner speed to the field. He’s raw but profiles as an alpha receiver, and I’ll chase that upside. He reminds me a lot of Jacksonville Jaguars WR D.J. Chark.

The Mean Green’s all-time leading receiver in yardage and receptions, Jaelon Darden is the most sudden and twitchy wide receiver of the draft class. Dardens’ North Texas tape and the movement skills he exhibits are reminiscent of Pittsburgh Steelers WR Diontae Johnson when he was at Toledo.

Similar in size to Johnson, contested catches may present a problem at the next level. However, an ability to separate from defenders and then create after the catch is strikingly obvious when watching Darden. Currently PFF’s No.12 WR, you shouldn’t be shocked when we hear Darden’s name called on day two of the NFL draft.

At this point in the draft, it’s dart throw time, and one of the running backs I love in this range is Rhamondre Stevenson. Stevenson, PFF’s 6th ranked running back last season, is a load to bring down at 230 pounds.

Stevens finished second in forced broken tackles per attempt in the class (0.36) behind only Javonte Williams. He can be the thunder to another player’s lightning in the right backfield and have a solid NFL career, and that’s a gamble I’d take at the end of my drafts. At the very least, he could be an intriguing TD vulture to start his career.

Tutu Atwell is a tried and true speed demon. His struggles against strong press at the line and occasionally loose route-running skills will hurt his chances of being an immediate impact at wide receiver. However, Atwells’ speed and elusiveness will get on the field instantly for special teams.

The way that he can change speeds on the drop of a dime is terrific. His fluidity and feet coming off the line are amongst the best in this class. Atwell plays bigger than 5’9″ and uses his body well to adjust to the catch while shielding defenders. I expect his ADP to rise because the third round is a bargain for his talent.

Thank you for checking out our three round 1-QB PPR Mock Draft! Come back during the 2021 NFL Draft for the latest news following the landing spots for these players.