The Nerds team is back with Round 2 of 1QB mock draft 5.0. Who is your second round steal? 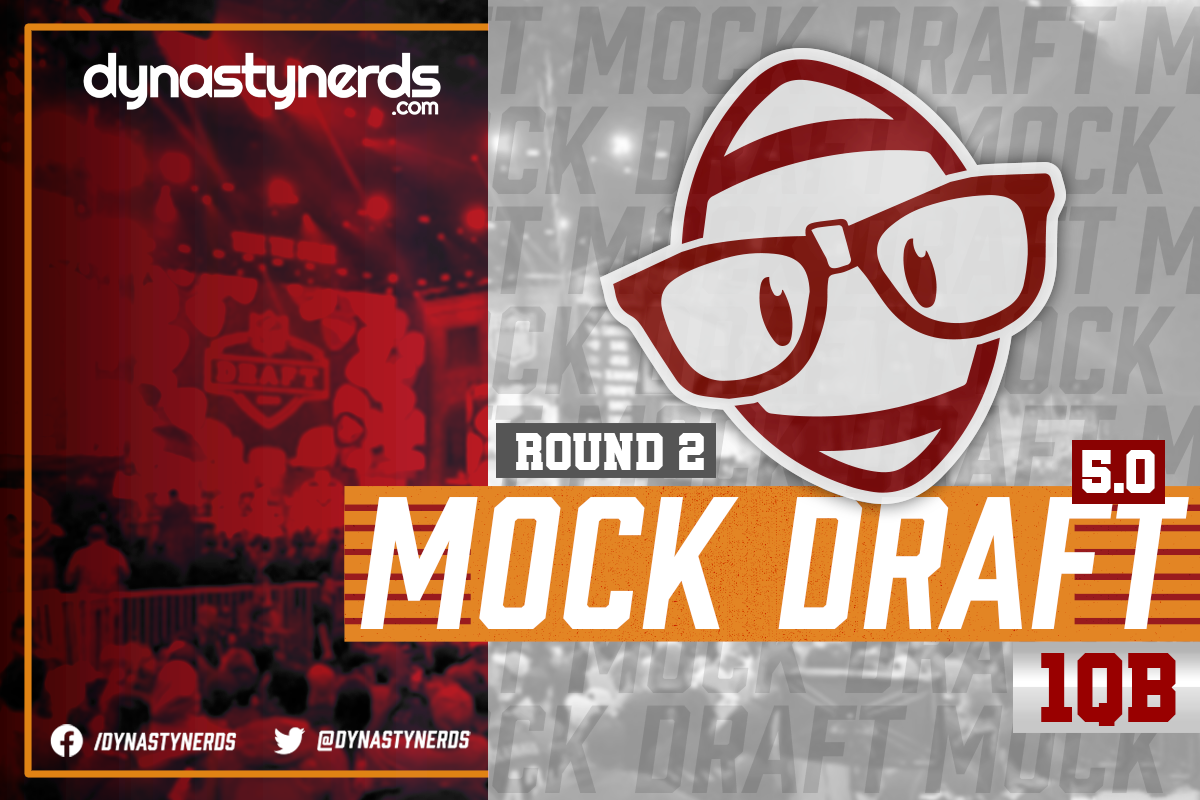 Round 2 of our 1-QB PPR Mock Draft is here! Version 5.0 has some more movers and shakers. You can find Round 1 here.

I’m sure there will be some snickering about this pick amongst some in the dynasty community. However, as I stated with the 1.01 when you are drafting this early, it is even more important to hit the nail on the head with your picks. To that end, I have selected my favorite overall TE in the class, Pat Freiermuth. The kid out of PSU has zero holes in his game heading into the NFL. I know most will say that Kyle Pitts is the hands-down top TE in the class, but I still have some questions about how he will hold up in the blocking aspect of the game.

Freiermuth excels at blocking and has a nose for the end zone. He broke Mike Gesicki’s Penn State’s TD record for a TE in fewer games. Knowing that I have to be right when selecting at this spot, I feel confident I have acquired an asset that will be a part of my squad for years to come.

Tylan Wallace had a great Senior Bowl week, so good, in fact, that he didn’t practice on day three. He runs great routes and can fit in almost any NFL offense, and will succeed. Wallace will fight any defensive back for the ball and make sure he comes down with it.

Carter isn’t quite the prospect that his teammate Javonte Williams is, but he’s still one of the few backs left on the board who I see as a potential NFL starter. He reminds me a lot of Philip Lindsay, who has excelled with the Broncos in his first three years.

Moore is one of the most dynamic receivers in the class, and his skill set will translate to the NFL perfectly. He will be a target hog in the slot. I don’t think 100 targets as a rookie is unreasonable. Moore catches everything, runs clean routes, separating with moves and great footwork. Elijah Moore is my Boo.

Javian Hawkins is an undersized back; however, as a redshirt freshman and sophomore, he produced and proved that he could take a big hit. He got better as the game progressed. Hawkins has excellent speed and is extremely shifty, hence, the nickname “PlayStation.” At Louisville, he was not asked to catch passes. However, he has all the tools to become a great receiving option out of the backfield.

Fields will have an opportunity to start year one in the NFL. He also has the potential to be a QB1 for the next 10 to 15 years. While there was still plenty of positional talent on the board (Terrace Marshall, Amon-Ra St. Brown, etc.), I went with a player who I think can bring stability at the QB position on my team. In this draft, there are only two QBs I’m confident can do that.

Come late April, I doubt you will be able to draft St. Brown this deep into your rookie drafts. Truth be told, I would draft St. Brown above each of the players drafted thus far in the second round of this mock. If he gets Day 2 draft capital, I’m confidently drafting him here. He profiles very well in today’s NFL with a versatile skill-set, and he will likely see the field early given his route-running, and special teams play in the return game.

I recently dove into some Terrace Marshall tape; while I didn’t fall in love with any single thing that he does, he stood out as a quarterback’s best friend. Marshall never gives up on a play. If the QB is in trouble and rolls out of the pocket, Marshall comes back into open space near the QB to help. His work ethic on the field will not go unnoticed. His extra effort will result in more targets when a play is blown up.

Jermar is my RB4, so I was thrilled that he fell this far down the board. With his freshman production, he has a good chance at seeing immediate playing time at the next level. While he hasn’t shown a ton in the passing game, I think he can be a two-down thumper and a threat at the goal-line. If he ends up in the right situation, I think 600-700 rushing yards and 6-7 TDs are achievable. That kind of production would be a steal at this point in the draft.

Dyami’s Twitter hype is dying down, which should make him attainable here. Brown was on the highflying offense at UNC, playing with future first-round pick Sam Howell. One thing that you always love to see are those 1000-yard seasons back-to-back. As I said in our last SF mock, he is great off the line of scrimmage, has a solid game speed, and is a threat to be a deep route WR in the league. In the late second/early third round, that is the type of player I am targeting in hopes of finding a late hit.

Seth Williams appears to be the forgotten man of the top wide receiver prospects. With Bo Nix failing to take even an incremental step forward, the talented and physical wide receiver did not have the type of season many expected from him. Williams saw both Anthony Schwartz and Eli Stove haul in more receptions per game. That could very well cause him to be a massive value in both the NFL Draft and dynasty league rookie drafts. If someone told you that you could snag Williams on Day 3 of the NFL Draft and in the late second or early third of rookie drafts, you would have called them crazy. But, here were are. Jump on this opportunity while you can.

Another player likely to ruffle Twitter’s feathers is Zach Wilson. Wilson’s size, level of competition, and projected draft capital have been a hot topic of discussion recently. He is polarizing. He shouldn’t be. While one underhanded throw doesn’t make someone Patrick Mahomes, a headband also doesn’t make him Baker Mayfield. When watching Wilson, I’m always struck by how natural he looks when making rollout and off-platform throws. While his propensity to attempt to hit big plays may be an NFL liability, it also provides the necessary upside to be a starter in single QB leagues. In Superflex, I recognize the bust potential, but in 1QB, the upside as a playmaker should move the needle more.

Check out our Superflex Mock Draft 5.0! We have Rounds 1, 2, and 3 coming your way! Check back soon as we finalize the 1-QB Version with Round 3!

The Nerds team will continue to do these every month leading up to our favorite time of the year, draft season. Continue to check back for all of our devy and NFL draft content as we push closer to the NFL draft.