The third round is complete, the Nerds team found great value and a few potential future stars. 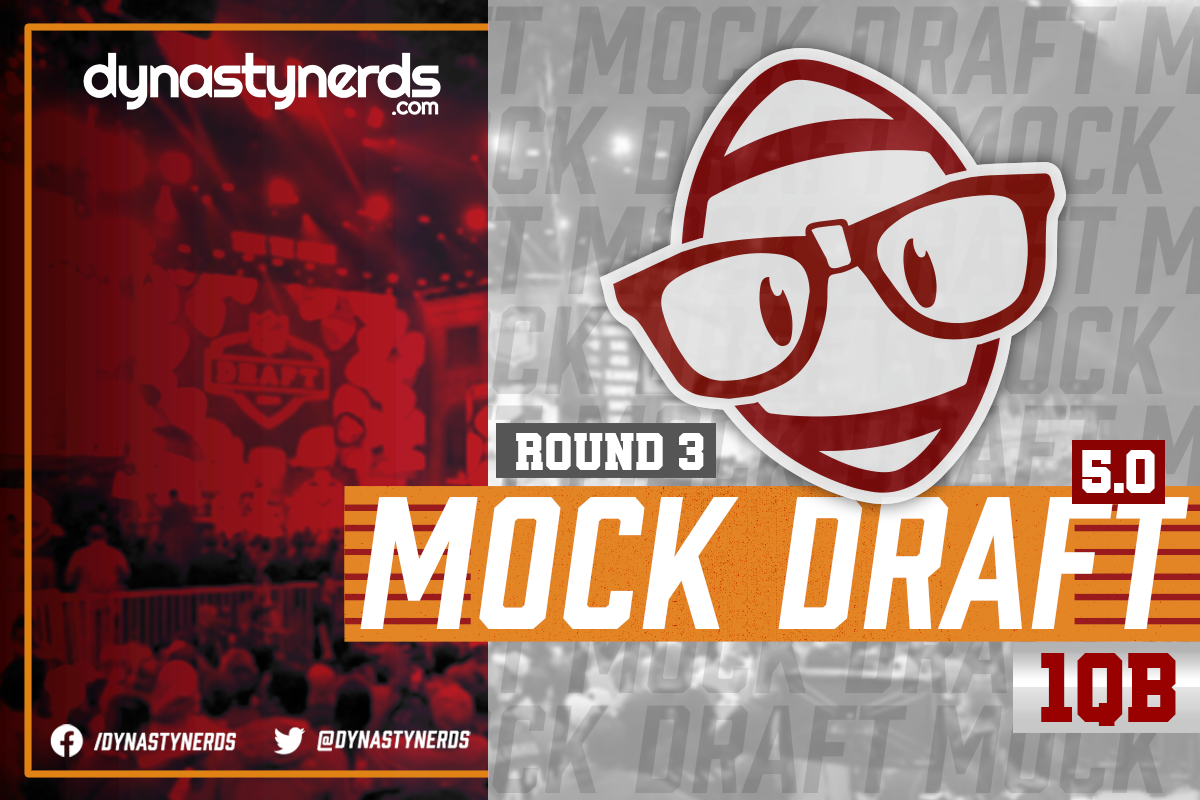 The end is here as we finish our 1-QB PPR Mock Draft Version 5.0 with a star-studded third round!

You can find the first round here and the second round is here.

For the first two picks of my mock draft, I selected the safe player. However, when we get to the third round, it is all about upside. Few players in the draft possess as much upside as Oklahoma State’s Chuba Hubbard. The kid from Canada possesses some incredible god-given talents athletically. Unfortunately for him, no player saw his stock fall as much during the 2020 season as Hubbard. Coming off a 2,000-yard Junior season, Chuba made the curious decision to head back to school for his senior year. From off-field controversy with his coach to diminished numbers on the field, things didn’t go Hubbard’s way in 2020. I am willing to bet on the 2019 version of Hubbard coming back to the surface in the NFL.

Trey Lance is my QB2, and getting him here early in the third round is a steal for me. He will most certainly go in the top 10. We only saw one game this past season, but in 2019 he threw for 28 touchdowns without an interception. Lance has tremendous upside, possibly the most in this class, but didn’t face tough competition and has questions. No matter where Lance ends up, he sure will be a fantasy stud.

A dynamic pass-catching tight end, Jordan would have been the best tight end in the 2020 NFL Draft had he been eligible. He had 38 receptions, 576 yards, and scored seven touchdowns in only eight games this past season. A tight end who plays like a wide receiver, he’s great value here and should be a great value for whichever team takes him in the 2021 draft.

Hill had one question left to answer as a running back in 2020 – can he catch passes. He answered it emphatically with 25 receptions in only three games. Hill can run inside, outside, and is dynamic in the open field. If he gets the draft capital and a spot where he can play – this is a steal in the third round.

A back with Stevenson’s size has no business moving as quickly and smoothly as he does. Despite having the build of a power back, Rhamondre Stevenson has a do-it-all skillset with quick feet. Stevenson could potentially be the fourth back off the board in the NFL draft and is a steal in the third round of a 1QB draft.

Shoot your shot in the later rounds of your draft and grab guys you believe in. Tutu has been one of my favorite players to watch since last season; he is getting overshadowed by how deep this WR class. He’s incredibly quick and a danger to score every time he touches the ball. In the right situation, he has the chance to be a difference-maker.

As Carl wrote above, at this point in the draft, especially in a single quarterback format, draft a player you believe has a great deal of upside. Sermon is that player for me here. Trending up as the season went along, especially into the playoffs, Sermon has the size and skill to be an every-down back in the NFL if given a chance. I don’t see him being a day two pick, but he will have just enough draft capital to get my attention if he goes in round four on day three.

Terry’s college career was plagued by subpar QB’s and ugly drops. But man, can this kid run. I can’t even begin to describe how excited I am for Terry’s pro day speed measurements. His height-adjusted speed score will likely break records. At this point in a rookie draft, I’m looking for upside, not a safe floor. And that’s exactly what Terry has—low floor, high ceiling.

At this point in the draft, it’s dart throw time, and Collins’ skillset is intriguing to me. While the Michigan offense somewhat capped his output, he averaged close to 20 yards per reception in the 2019 season before opting out of the 2020 campaign. I think his size coupled with his big-play potential down the field makes him someone to target in this range as he could really pop if he ends up in the right situation.

Mac Jones led all of college football in yards, completions, and completion percentage in 2020. His ability to thread tight windows is awe-inspiring. Taking a shot on that as one of the final picks in the third round is something I would do every opportunity if presented. Even if Mac Jones ends up being a mediocre QB in the NFL, it is worth it, as many third-round rookie picks don’t pan out. This gives you the safety of a more likely hit in the third while also holding the upside of a quality QB who may be the best pocket passer in the class.

Jaret Patterson in the third round? This was quite a shock as the Buffalo product had one of the most electrifying runs of any player at any position in 2020. Patterson is shaping up to be a potential early Day 3 pick with Day 2 upside and could make serious fantasy waves if he lands on the right depth chart. His ability to cut in a phone booth could quickly make him a household fantasy name capable of picking up chunk yardage at a moment’s notice. His size and competition question marks could cause him to be a value in early drafts, so if you see him available in the third, snap up all of the shares.

Eskridge is more NFL-ready than a few of the players taken above him here but will deservedly drop on NFL and dynasty boards due to age concerns. Despite a strong Senior Bowl performance and effusive praise by ESPN’s Todd McShay, Eskridge is a 24-year-old prospect who never eclipsed 800 yards in five seasons at Western Michigan. Possessing a sudden release and dynamic with the ball in his hands, Eskridge will capably fill a valuable slot role for an NFL team. He is, however, a player whose dynasty value may never match his weekly production. Good value late third, even if the long-term value upside is capped.

Check out our Superflex Mock Draft 5.0 to see how that mock played out as well!