The final ‘Nerds mock before the NFL draft! 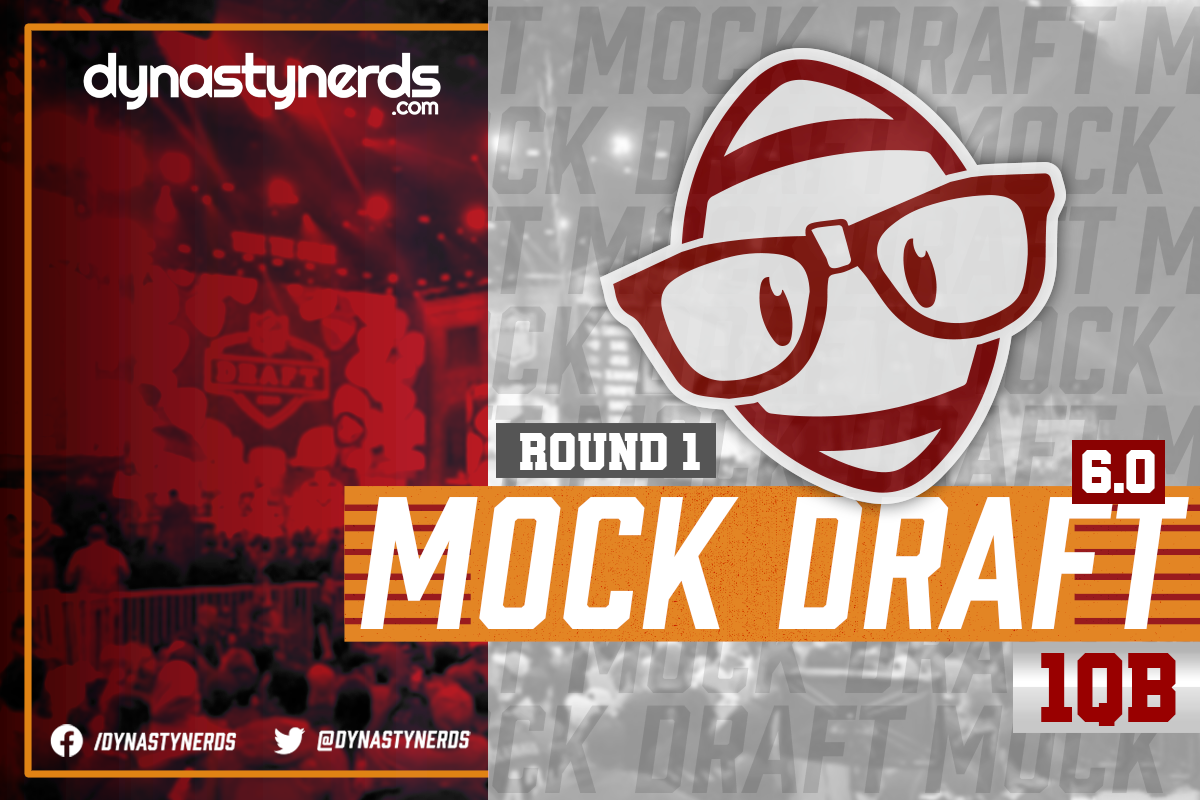 April is here and we are just a few short weeks away from the 2021 NFL Draft! Our DynastyNerds provide you their final insight before we know the landing spots for these talented prospects.

This pick to me took no time at all. Najee is going to be a workhorse and will put up good numbers no matter the team he ends upon. There are other players in this draft that will produce as well, maybe even as much, but when you see a guy you think will be a workhorse RB1 you pull the trigger.

The first few picks in this draft will be incredibly easy. Ja’Marr at 1.02 one of the easiest picks I’ve ever made. Physical, natural ball skills, great release. There’s not a single spot on the field where Chase doesn’t have the tools to win.

Travis Etienne and Javonte Williams was a difficult choice, but it had to be one of them. I went with Etienne because I believe he could be the guy who walks into a true 3 down role and there’s nothing I love more for talented prospects than opportunity. Etienne is a safe pick that I’m happy to have here.

At this stage, pre-draft, there is more strategy to drafting than just blindly selecting who you feel is the best player available. While Javonte is not my fourth-ranked player in a single quarterback rookie draft, he’s also my clear-cut choice to draft here given the dearth of talented running backs and the depth of wide receivers available. I will still be able to get an outstanding wide receiver with my pick in the second round, and I simply can not say the same about running back.

That said, to be clear, it isn’t like I’m slighting the talent of Williams. He is a fantastic blend of size, speed, and power, and his game will translate seamlessly into any landing spot in the NFL.

The speed is well documented but Waddle does so much more. He is a smooth route runner, has good hands, and is dangerous in the open field. He sifts through traffic well, can shift gears, and doesn’t lose speed when making cuts. I hope he falls into a great offense who can optimize his skill set.

Bateman has been a darling to both film grinders and analytics scouts, ranked as high as the WR1 by some.

He just added to his draft profile by running a sub 4.4 40-yard dash at his pro day, though many were disappointed by his measurables.

I was debating between Smith and Pitts, but I had Smith higher on my big board and typically do not take tight ends in the first round. The only knock on him is size, but there are other wideouts near the same weight but two to three inches smaller. I believe he will have an immediate impact wherever he lands.

You can take Kyle Pitts at literally any pick in any format, and no one can fault you. His only real comp as a prospect is Calvin Johnson. Lance Zierlein has him graded as an pro bowler, and no one that has watched Pitts film has any basis to argue. Yes, some hyped-up TEs don’t pan out- Howard, Engram, Njoku.

Kyle Pitts will work out.

Even in a single-QB league, this was not a difficult decision. Trevor Lawrence is a blue-chip NFL prospect who can start immediately for his NFL team, as well as your dynasty team. Lawrence has prototypical size, better than advertised athleticism, and can make every throw in the catalog. The NFL QB position has seen significant turnover this offseason, a trend that may continue into 2022. Brady, Roethlisberger, and Fitzpatrick are seemingly defying time and logic with every practice. Cam Newton may never recapture his Carolina greatness, and reclamation projects like Winston, Wentz, Goff, and Darnold don’t inspire long-term confidence. Don’t be afraid to buck the conventional wisdom and draft QB high in your upcoming rookie drafts.

Was hoping Pitts or Lawrence fell to this spot, but with them off the board I will take my WR3 in Marshall. Marshall put up an amazing 23 TD catches over the past two season playing alongside stud wide receivers like Justin Jefferson, JaMarr Chase and Kayshon Boutte. He’s built like a prototypical NFL wide receiver and will be an immediate red-zone weapon for any team that takes a chance on him in the draft. We already saw what Jefferson could do in the NFL – I think Marshall has a chance to be just as good if not better.

Jermar Jefferson moves his feet non-stop when running. I love that. He has the burst ability to shake and burn defenders once he breaks into the open field. He also is not shy from busting a defender in the face. With all this said, my favorite traits are his body control and balance on his feet. He can find the smallest of holes and score quickly. What worries me is how he has gotten tackled by the shoestrings in the past by defensive backs. This is an easy thing to overcome so I view him with extreme upside at this pick.

Check out Round 2 of our 1-QB PPR Mock Draft coming your way!

Building a Dynasty Vol. 2: Importance of a Workhorse Running Back
2021 Super Flex Mock Draft Version 6.0 Round 1