Who should you be looking at in the 3rd round of your rookie draft? 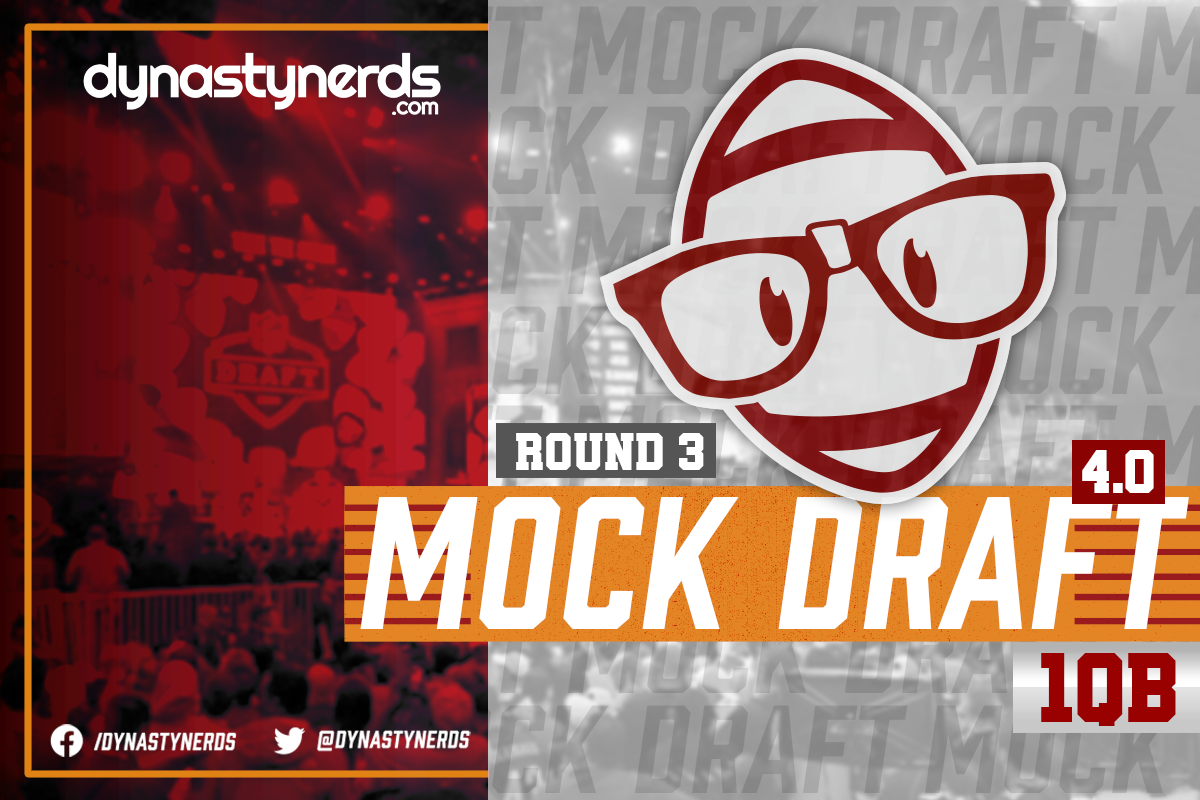 We’re a step ahead of you with our fourth mock of the year- and the first published 3-rounder of the season!

My biggest takeaway here is that there’s still a staggering amount of talent on the board. I’m taking Lance as he has the potential to be a difference maker at the QB position. Are there risks? Sure, he’s been beating up on guys that are a half step above high-school talent. But his traits are undeniably attractive, and there are better scouts than me that have him as the QB1.

Ahhhh, my QB2 almost got to me. Nonetheless I still love Zach Wilson. The first game I watched of him this year, I said to myself I’m going to take him late in drafts. Well his stock blew up with the year he had and there will be no steals now. I’m glad to still be able to snag him here and will be a good fantasy QB.

I debated taking Brevin Jordan here but went with the more traditional TE who has less bust potential. Getting a top 3 TE from this class in the third round is a win. It may take Pat a couple years to reach his potential but I have little doubt that his game won’t translate to the NFL.

When it comes to drafting, one of the most important mantras is to not scout the helmet, scout the player. In this case, I’m going to cheat and do both. Brevin Jordan is a Miami Hurricane tight end, joining a list which includes Greg Olsen, Jimmy Graham, Jeremy Shockey, Kellen Winslow, Jr, and Bubba Franks. If none of those players existed, or if he went to a different school? It wouldn’t matter, because Brevin Jordan is going to be a superstar in his own right. In the third round of your rookie drafts, you could do much worse than a player who would be the first tight end off the board during most years. He is the Justin Fields destined to be drafted behind Kyle Pitts, the Trevor Lawrence of tight ends. There are still plenty of wide receivers available at this point in the draft. Rather than taking the 13th or 14th best receiver, an already overloaded position in the NFL, take the elite player at a position desperatly yearning for talent.

Once again, I am taking Michigan’s Nico Collins. Collins has good size and speed for your prototypical outside WR, and has been a bit overlooked because he opted out of the 2020 season. I was hoping for Freiermuth to drop to me here, but I am glad to take Collins. I doubt he will be available here come summer.

Hill has a lot of attributes that can help him translate to the NFL. He may be somewhat landing spot dependent, but his potential makes him a nice value in the middle of the 3rd.

Following the senior bowl, this will be a bargain for Eskridge. He’s going to rise up boards during the pre-draft process. He’s a talented receiver who, with opportunity, will have the ability to make an impact at the NFL level.

Stevenson burst onto the scene this season at Oklahoma, drawing attention for his powerful running style in the wake of Trey Sermon’s transfer. Stevenson is by no means a burner but he has the size and talent to be an effective power back at the next level and while the number is still small, Stevenson did increase his number of receptions to 18 this year, showing some improvement in that area. While Stevenson should become a redzone machine in the NFL, some are reporting he has cut down to 225-230 and if that is the case a much more prominent role could emerge.

Sage Surratt is polarizing depending on how you look at his stats. Usually, a sophomore year breakout from an NFL-size-bodied Power-5 wide receiver who declares early is a no brainer to take a swing on in round two at the latest. However, Sage also turns 23 just weeks before the 2021 NFL draft. I’ll take a swing at this price over some of the other prospects in this range and hope he is given a solid opportunity to at least return some WR2 value.

Tutu has a small frame but speed for days. He’s only 21 years old and broke out early at 18. He’ll be a boom/bust pick in the 3rd round.

A very odd profile here in Patterson. Excellent college production (1K yards as a freshman, 8.6 YPC in 2020) and pops on tape. Maneuvers very well at full speed, and despite being undersized, Jaret runs with more power than you’d expect. Highly limited pass-catching usage at Buffalo (only 20 rec in 32 games). This factor combined with an undersized back will be problematic for dynasty managers and NFL evaluators alike. Upside may be capped at a Phillip Lindsey level.

Lacking the explosiveness of the rest of this class, Rodgers relies on his dependable hands to make plays. He’s one of the very few WRs that can boast an 81.5% career catch rate on 222 targets. There are some red flags to look into (senior, late BOA, low DOM, low target share), but he has the tools to be a reliable possession receiver in the NFL.