@Glosser13 and the IDP team are back for round two of the IDP only rookie mock. 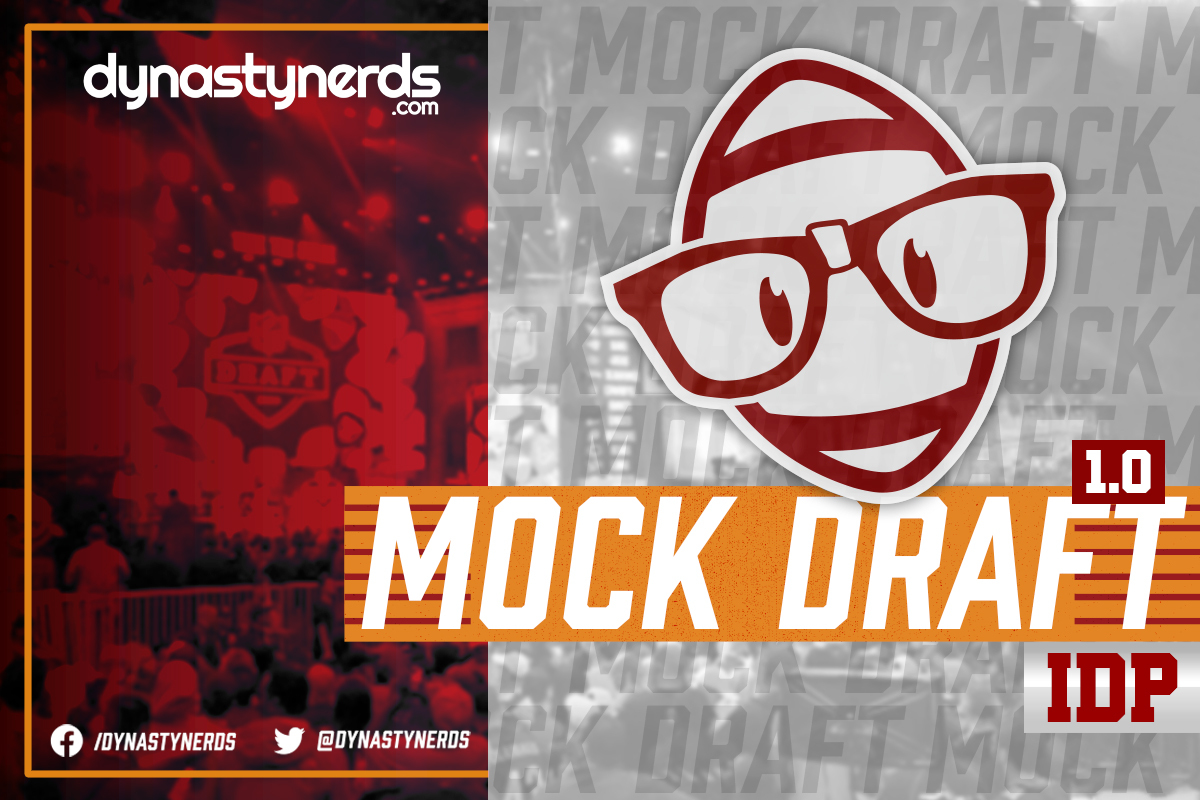 Welcome back, IDP Nerds. It is time for Round 2 of our first IDP only rookie mock draft. Round 1 can be found here. It’s never too early to get to know all the future IDP stars entering the NFL. At Dynasty Nerds, the IDP team will have you covered all off-season with content to keep you ahead of the competition.

I wouldn’t expect to see too many mock drafts’ where Kwity Paye falls out of the first round; we can chalk that up to it being so early in the off-season. Paye only played in four games this season, and Michigan was not a good team; however, the 2019 season proved how good he could be. The Michigan pass rusher has racked up 97 tackles, 23.5 tackles for loss, and 11.5 sacks in 28 games.

You don’t just get a cool nickname like “Boogie” without backing it up. Despite Basham only registering 24 tackles and zero sacks as a freshman, he collected 19.5 sacks, seven forced fumbles, and one defensive touchdown over his next three seasons. This draft has good depth, specifically at DL/EDGE. Basham is another player who projects to be a productive IDP for years to come. Boogie ranked number 2 in the ACC in both sacks and tackles for loss in 2019, and his four forced fumbles in 2020 are best in the conference.

Arguably the best tackler in the 2021 class of defensive backs. Paris Ford is always around the ball and looking to set the tone with a big hit. As a junior, Ford posted 90 tackles, three interceptions, and nine passes defended. An NFL defense that likes it’s safeties to play shallow zones will be the system that Ford can thrive in from day one. It may take him some time to get used to being a deep safety, but that’s certainly something he can do if asked.

One thing that’s very common in this class of EDGE defenders is versatility; Joseph Ossia is another example. Ossai still raw as a real LB but has shown he has the skills to be a weak-side linebacker at the next level. Ossai has been very productive in his past two seasons with 145 tackles, 10.5 sacks, 29 tackles for loss, and four forced fumbles. It becomes challenging to project IDP value for a player as versatile as Ossai with uncertainty as to what role he is drafted for in the NFL.

Christian Barmore is a huge man who has a ton of upside. Barmore projects as an interior defensive lineman in the NFL. In 2020 he collected six sacks and three forced fumbles in just nine games played. Christian Barmore is only scratching the surface of how good of a player he can be.

Syracuse safety Andre Cisco is the best ball hawk safety in this draft. The Syracuse safety possesses a rare skill set; he has accounted for 13 interceptions in 24 games. Cisco ranked number one in interceptions in the ACC in both 2018 and 2019 and #1 in the NCAA in the 2019 season. Cisco brings enough as a tackler to think he will produce in IDP leagues. He had 136 tackles while playing for the Orange, including at least 41 solo tackles in each of his first two years.

If there’s one thing you can count on, it’s Penn State producing athletic freaks into the NFL. Jayson Oweh is the next man up and should join teammate Shaka Toney as early-round picks in the 2021 draft. Jayson Oweh has improved every year. His sack numbers suffered the most in 2020, with the Big Ten being the last league to start play. Only seven games played this year, Oweh still was able to record career highs in tackles (38) and tackles for loss (6.5). Their upside is there for the Penn State product in IDP leagues; he just may need some time to earn himself a starting spot on an NFL roster.

After Patrick Queen and Jacob Phillips’s loss to the NFL, LSU brought in Grad Transfer Jabril Cox. The former FCS Defensive Player of the Year in 2018 brings a combo of size and speed that should be attractive to NFL teams. The former North Dakota State Bison collected 58 tackles, three interceptions, a sack, and a defensive touchdown in 2020 for LSU. Should find a role as an outside LB in the NFL, will need to improve tackling to be a reliable IDP starter. If he lands in the right situation, he can be a great value in rookie drafts.

Arguably one of the most polished defensive linemen in the 2021 class. Patrick Jones plays with a very high IQ and discipline, plus he has all the tools to succeed in the NFL. Jones will likely be a player that rises rookie IDP rankings as we get closer to the NFL Draft. The Pittsburgh Panthers pass rusher finished 2020 as the ACC leader in sacks with nine and ranked sixth in the ACC to tackle loss with 13. Over the past two seasons, Jones has accounted for 17.5 sacks and 24 tackles for loss. Patrick Jones II is equally as good against the run as he is against the pass. That should make him very valuable to IDP managers as they look for cheap depth in their rookie drafts.

The depth of EDGE players in this draft is a welcoming sign. Most, if not all, IDP managers are aware of how top-heavy the DL position is in dynasty fantasy football. Patrick Johnson from Tulane brings a versatile style that has seen him play multiple roles over the past few seasons, including linebacker and interior defensive line. The numbers are there for Johnson; he finished his Tulane career with 21 sacks, 35 tackles for loss, and six forced fumbles. NFL teams should be intrigued by his versatility to rush the quarterback from the inside and outside. This is an excellent sign for his long-term IDP value.

Talanoa Hufanga took home the 2020 PAC 12 Defensive Player of the Year for the USC Trojans. The USC safety brings everything you can ask of a DB in the run game, including being an excellent tackler. Hufanga collected 203 tackles in three years at USC, including 129 of them solo tackles. There’s not much to dislike about Hufanga; he led the PAC 12 in solo tackles, interceptions, and interception return yards in 2020. His man coverage skills will need to improve if he’s going to claim a starting role quickly. He should be on every IDP manager’s radar heading into your rookie drafts this off-season.

The best zone coverage safety in the 2021 NFL Draft, Trevon Moehrig brings an aggressive style that allows him to be very useful with his remarkable range. Much like any aggressive deep safety has been beaten on double moves, but that’s something that can be coached up. Moehrig finished his career at TCU with 124 tackles, seven interceptions, and 21 passes defended. The ability to have a safety who can play a mistake eraser type style is so valuable in the NFL. The TCU product should be a great addition to any defense looking for help on the back end.

There you have it, fellow IDP nerds. Thanks for checking out the two round IDP only mock brought to you by the dynasty nerds staff and friends. We will have more mock drafts coming at you all off-season long. The grind never stops; the chase for the next dynasty championship starts today.