The DynastyNerds team along with a few guest celebrities continue their rookie mock draft of both offensive and defensive players. 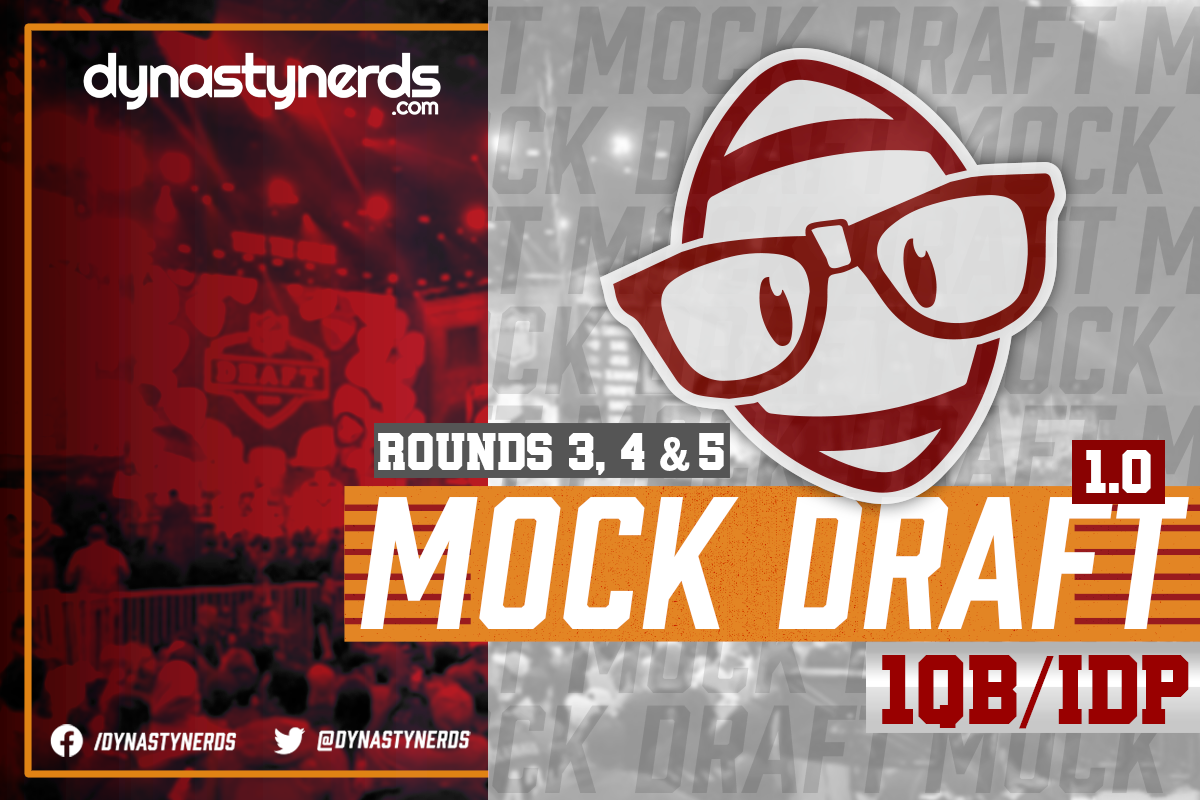 After going through the first 2 rounds, we chose to go even deeper, giving you 3 more rounds of picks in our expert mock using IDP123 to balance fantasy scoring between offensive and defensive players.

I love this value. It’s likely going to be a year or two before Pat Freiermuth sees enough targets to be a TE1 in dynasty with the talent at WR on the Steelers. However, he should be a target in the red zone and with enough TD catches can provide plenty of value to your dynasty team.

It’s not pretty, but Mac Jones is a decent value here.

As the top EDGE on my board, I am very happy to collect Paye at this point in the draft.  He has good size, plays with power, and tested exceptionally well for agility (with a faster 3-cone drill than Tyreek Hill). Indianapolis invested 1st round draft capital in the player and is sure to showcase him in their defensive front.  I feel very confident about this selection.

You might hear about his lack of sack production, but Oweh was still an effective disruptive force in the backfield by racking up pressures at a strong rate. Baltimore has a void at the position and invested a first round pick to give him a lot of playing time; that could lead to a breakout as the best rusher of the class.

JOK fits perfectly into the defensive scheme in Cleveland. He will be their do-it-all LB who will be asked to both blitz and drop into coverage.

I finally dive into the IDP pool here. Grant landed in the perfect spot going to Atlanta. Grant has draft capital and an immediate opportunity to see the field. One of the few rookie DBs that I’ll be targeting in drafts.

I love his landing spot with the Chiefs. With a solid training camp and preseason, Bolton should carve out a role almost immediately. Bolton is a tackling machine.

The Packers FINALLY drafted a wide receiver. The question is, who will be throwing it to Amari Rodgers? While it is a concern, I’m willing to take Rodgers here with the hope he’s catching passes from the reigning MVP. I expect Green Bay to find ways to get Rodgers touches as he’s such a playmaker with the ball in his hands.

While Jaelen Phillips is the most NFL-ready pass rusher, I believe that the highest upside DE in this class is Gregory Rousseau. As a redshirt freshman in 2019, Rosseau tortured ACC quarterbacks on his way to 15.5 sacks and two forced fumbles. Bills mafia has heavily invested in the defensive line in recent NFL Drafts. Taking on Rousseau one-on-one won’t cut it; he has immediate double-digit sack upside.

I think the opportunity for Dyami with Washington will get him playing time. He’s a deep threat but also good in other aspects at WR, he will be a solid receiving option opposite McLaurin.

Houston’s QB situation needs to get figured out, but the only player in front of Nico on the depth chart is Brandin Cooks. I will happily grab a WR2 at the end of the third round who can be a red-zone threat.

Cornell Powell is one of my biggest risers after the draft. He was a very late breakout, though when he did, he did in a big way. Powell joins a Chiefs WR group that consists of Demarcus Robinson, Mecole Hardman, Tyreek Hill, and tight end Travis Kelce. Outside of Kelce and Hill, the depth chart is pretty wide open. Powell has a chance to make an early impact.

He was my pre-draft DB1. It’s likely he will play deep safety alongside Jonathan Abram. Moehrig can still be a year 1 fantasy producer if he’s fully healed from his back injury.

Eskridge could be a solid pick if Seattle actually lets Russ cook.

Holland was the first safety selected in the 2021 NFL Draft when he went to the Dolphins with the 4th pick of Day 2. He brings tremendous versatility to Brian Flores’ defense, with the athleticism for deep coverage but the tenacity for in-the-box thunder. He’ll get every opportunity to contribute early and may end up as the best safety in this draft class. Love this value at the top of Round 4.

There’s some lottery tickets I’d like to punch later, but first I want to grab a potential starting option for the Saints, as they invested highly in Werner to develop into a regular starter on the second level of their defense.

Jordan was a pre draft favorite, but he fell in the NFL Draft leading to value by grabbing him in the fourth here.

I love Fitzpatrick’s tape and I think there’s a real chance that he slides in as the #2 WR in this offense. He’s big and physical and fits what the Titans do well. There’s 200 vacated targets up for grabs here, he’s a great option this far down.

The Jaguars have a glaring need at safety and Andre Cisco fits the bill. Cisco is a ball-hawking safety that will be all over the field making plays.

The Broncos wanted to add some speed and athleticism to their linebacker unit and Browning definitely brings that. He has a versatile skill set with the ability to play off-ball linebacker and rush off the edge. Monitoring the buzz on how Denver plans on using Browning will be something I’m keeping up on. That being said, I can see Browning getting some run as a rookie as he has way more to offer than the likes of Josey Jewell.

Consider me out on a limb for the North Texas product. Darden has several roadblocks in his path to playing time. However, he matches an archetype that Bruce Arians has had success with in the past. Whether Emanuel Sanders, Mike Wallace or AB in Pittsburg, John Brown or JJ Nelson in Arizona, or the selection of Darden here in Tampa, Arians envisions a role for this style of player. It will take a year, but with Godwin on the franchise tag, and Antonio Brown on a 1-year deal, opportunity is just around the corner.

The Vikings took Patrick Jones in the third round and he will rotate in and get playing time from Day 1. He’s got a ton of potential and has gotten better every year. He can get after the passer and isn’t a liability versus the run. I love taking him here in the fourth!

Boogie got 2nd round draft capital from the Bills and with how raw Rousseau is I expect Basham to get playing time a lot sooner. He obviously still needs to work on a few things but he has the potential to be a sack monster for the Bills.

Turner is big and super athletic for his size. He gets surprisingly great bend rushing off the edge for a guy sporting a frame of 270lbs. He easily showed the strength to battle NFL caliber tackles and carries 1st round draft capital. Turner has what it takes to be a difference maker.

Converting to the LB position after two years of playing QB, Surratt is still a raw prospect with a lot of promise as a high IQ athlete.

In the Chargers offense, Palmer has a decent shot at making an impact early after getting day 2 draft capital.

The fifth round is the time for upside dart throws. As a linebacker bursting with potential, Jabril Cox fits that description. His landing spot amidst a now suddenly crowded Cowboys’ defensive depth chart is admittedly less than ideal. However, with tremendous burst and coverage ability, I’m banking on Cox seeing valuable snaps sooner than later. Once he seizes the opportunity, this late round investment has the potential to pay big time dividends.

We haven’t picked a RB in 3 full rounds, since I selected Trey Sermon at 2.04. We didn’t forget about these guys, this just illustrates how weak of a class it is at the position. But, in the last round I’ll take a stab at Gainwell being one of those PPR guys that have a great RB2 year.

The speedster out of Auburn adds a big play dynamic to the Browns offense and has day 2 draft capital.

Electric: that’s the 1st word I think of when talking about Smith-Marsette. He also lands in a situation in Minnesota where the team has a track record of utilizing late round or undrafted receivers (Theilen, Diggs, etc.). The high upside of Smith-Marsette this late in the draft is the way to go.

For any CMC owner, Hubbard is a must own. CMC is coming off a season only playing a handful of games. The Panthers will ease his workload and dump it off to Hubbard. Mike Davis has left town and the RB2 slot should be his.

If you’re looking for a linebacker with immediate opportunity, then you came to the right place. With third round draft capital and only Micah Kiser and Troy Reeder in his way, Jones walks into a great situation to make an early impact. Jones is solid against the run, but will have to improve his coverage skills. His prime landing spot and tackling ability make Jones a great late round flier.

Considering the talent, or lack thereof, in the New England running back room, it’s possible Rhamondre earns opportunity in his first year. A power running game has spearheaded NE’s offense in recent years, and Stevenson is a downhill, no-nonsense runner who fits the Patriots better than a self tailored hoodie. While the upside may not be huge, RB3s are essential to keeping your dynasty hopes on track through bye weeks and injuries.

Nasirildeen is a versatile safety, but will be a factor early on as a run-stopping bopper who likes to hit, enforcing the middle of the field. He should see playing time early and be a solid DB2/3 for IDP fantasy purposes.

It’s the 5th round and time to take a flyer on a WR with 2nd round draft capital. I loved Tutu‘s film at Louisville but I worry about him not even being 150 lbs. playing a game as physical as football is. Here is to hoping he succeeds.

The Lions traded up into the 4th round of the 2021 draft to select Derrick Barnes in the 2021 Draft. Barnes has a pretty versatile skill set as a pass rushing linebacker and can play with his hand in the dirt. He will make his bank though by playing WILL linebacker with the Lions, who have one of the worst linebacker corps in the NFL. Barnes will be best used as a blitzing off-ball linebacker and in the last round, I will take a chance on his potential upside.