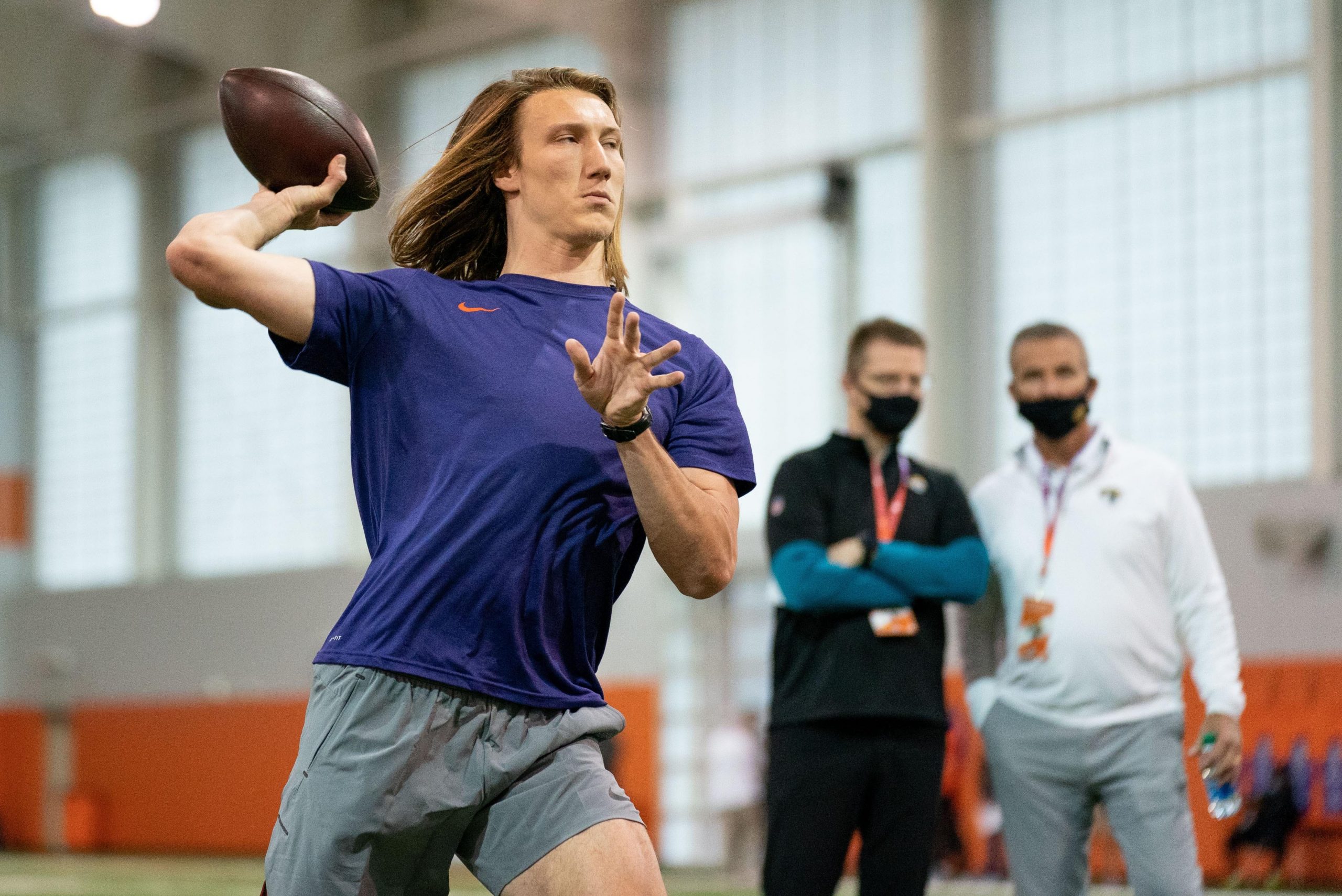 2020 has come and gone. The world is finally and mercifully returning to some semblance of normalcy. COVID descended on the real and NFL world shortly after the 2020 NFL Combine. As a result, the draft process wasn’t significantly impacted in 2020, except for the draft taking place in commissioner Goodell’s basement.

2021 will be a different entity. College opt-outs, a shortened college football season, and no NFL combine in 2021 are forcing talent evaluators and dynasty analysts to jump through more hoops than ever. One of these hoops will be sourcing and qualifying Pro Day results.

Pro Day testing in the past was mainly used as a cross-check on NFL combine results or for players who did not/could not compete at the combine in Indy to register times. Former coaches, trainers, and alumni run these events. While there is a baseline level of control, it’s important to point out that the people timing and overseeing these events are interested in seeing these players succeed. The prudent move for fantasy managers, both in the past and as we look forward, is to take any Pro Day result with a grain of salt.

Football is an inherently athletic sport. Technical aptitude and knowledge of the game are essential to any player or prospect’s success.  However, whether learned or given, athletic traits often are the separating factor between good, great, and exceptional players.

My personal view on the value of athletic testing relies on hitting historical benchmarks for minimum athleticism. These minimum thresholds will vary by position but most often must be met for a player to have success in the NFL.

Therefore, athletic testing rarely will move players up and down the draft board for me but can disqualify a few players every year. We will discuss some of these benchmarks throughout this and the following pieces, primarily through the lens of historical percentiles.

The other mistake made in athletic analysis is the tendency to double count a testing score. Jaylen Waddle is fast on film, just as Henry Ruggs was a year ago. While the 40-yard dash times they run may be impressive, they merely verify what we already see on film. To elevate either player, after seeing a 40 time that was expected, would be a mistake.

As a fantasy analyst, I’ve never seen my primary duties to be determining whether or not a player or prospect will or won’t succeed. Predicting the future is a futile business. As I see it, my task is to as accurately as possible explain all the possible ways a player could succeed. Additionally, my goal is to explain the potential limitations a prospect has in role versatility.

Role versatility is the area that I believe physical measurements hold the most weight; forgive the pun. Arm length for offensive lineman will impact the likelihood a prospect can be isolated on an island at tackle or may need to move inside to guard. BMI (body-mass index), a simple formula for quantifying weight relative to height for running backs and tight ends, can give us hints at how prospects will be used most successfully.

Outliers exist within these physical archetypes. The NFL is always changing. In recent years an emphasis on hybrid athletes, or “position-less players,” has begun to change the way we view player roles. Still, attempting to understand how a prospect’s body allows them to operate in the NFL is a critical part of the evaluation.

For more information on the individual events and some historical information on past results and position-specific testing ranges, reference; “Todd McShay’s Guide to every Combine Drill.” In order to calculate percentiles for this piece, I used historical data from Mockdraftable.com.

Additionally, 2021 Rookie Draft Profiles are linked into this piece. As you view the numbers, just click on the players name and check out the fantastic work by the #NerdsStaff.

Surgery on Lawrence’s non-throwing shoulder to repair labrum damage forced Clemson and the draft’s top prospect to expedite the pro-day process. Lawrence was measured and demonstrated about 50 throws to NFL evaluators on February 12th.

The on-field work was far more compelling for Lawrence than the measurements, but we need to discuss a couple of notable takeaways. Hand-size twitter can relax, as 10 inches is in the 80th percentile for NFL QB prospects. However, weighing only 213 pounds at nearly 6’6, Lawrence on paper would appear to be undersized. The critical thing to remember with Trevor is the shoulder surgery.

NFL Network’s Daniel Jeremiah noted on the broadcast that Lawrence hasn’t been able to build his upper body since aggravating that shoulder during the 2021 season. With the surgery completed and the expectation that Trevor will be full speed before training camp, it’s reasonable to believe Lawrence will be closer to a respectable 225 by his debut in the league.

Forget the grain. This number needs to be taken with a boulder of salt. This 40-time was registered at the “EXOS Combine” held in several cities on February 26th and 27th.

It has been nearly impossible to find complete results from this pseudo combine event. No NFL personnel were allowed in the building. The few results that have leaked out have been by the players’ representation, and for these reasons, it requires a healthy amount of skepticism.

The biggest knock on Bateman as a prospect seems to be a perceived lack of athleticism. This result would primarily put that debate to bed, but I believe NFL coaches and scouts, as well as dynasty managers, will want to see him verify this time at his April 1st pro day in Minneapolis. If true, however, this would give Rashod Bateman added steam towards his potential top-25 NFL Draft value.

Let’s start with the size. Pooka has a BMI of 25.5, well below the normative range, even for a “scat” RB. Typically, we will be looking in the 30-32 BMI range for a three-down RB. Weighing in at only 175 vastly limits the ways Pooka will be used in early-down and pass-pro scenarios.

The 40-time, while registering in the 93rd percentile, once adjusted for size, becomes far less impressive. As noted by @TheSmingDynasty in Pooka Williams 2021 Rookie Draft profile, the expectation was that the five-toed RB would run somewhere in the 4.3’s. Do not double count this time, impressive as it may be.

Stay tuned to DynastyNerds.com for all the pro-day results as we near the 2021 NFL Draft. Next edition will have results from Clemson, Wisconsin, Oklahoma, NDSU, Northwestern, Arkansas and many others.

Dig deeper into rookie prospects with a #NerdHerd membership. For the price of a cup of coffee a month, you’ll get access to the Prospect Film Room, the best #Rankins in the business, and the revolutionary #DynastyGM tool.