The 1QB mock draft closes out with round 3. Which lottery ticket will be the one to pay off? 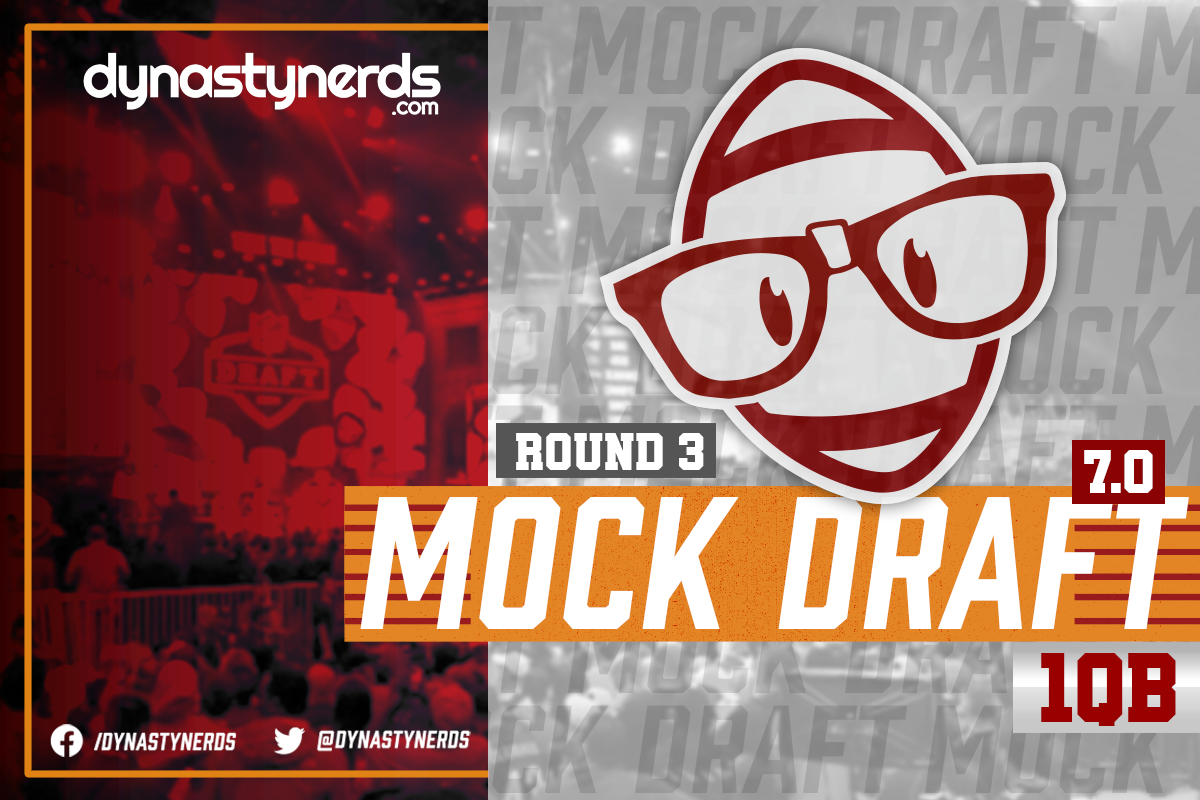 Let’s wrap up our Rapid Reaction rookie mocks with the third round selections. Things get a little crazy as we get later into our drafts. Who would you have taken? See anything surprising?

While taking the fifth QB in the draft in 1QB format may be lower value, it is hard to find a unicorn the later the draft goes. Typically, a breakout from the third round or later is a QB or a TE. I’ll take my shot on Mac Jones’ accuracy and ability to read defenses and hope that landing with Bill Belichick produces QB1 results. His lack of mobility hurts his chances, but there is upside to his game that could make this a steal years from now.

Last year, Chuba was projected as one of the big running backs coming out. Pulling a Bryce Love and plummeting his stock by coming back, Chuba is now behind the one and only Christian McCaffrey. It’s the third round of the rookie draft, so we can afford to take chances.

Nico Collins was my 12th ranked receiver heading into the NFL Draft weekend. He landed in Houston where they are looking for someone to operate opposite of Brandin Cooks. I’m even higher on Collins after seeing him get taken in the third round. Houston presents a situation that is ripe for taking. They should trail in most games this year, so that should mean they’ll be throwing the ball quite a bit. Collins could see himself starting come week one, depending on how training camp goes for him. He’s a great third-round rookie draft dart throw.

Hawkins did not land in a bad spot with the Falcons. Mike Davis will get the bulk of the carries, but after that, the backfield is wide open. The Falcons should have an explosive offense, giving Hawkins some dynasty appeal

The Bears signed Damien Williams and will get Tarik Cohen back from injury, but there’s still room here for Herbert to carve out a role. With an astonishing college YPC of 7.6 and excellent vision, Herbert has the chops to be a factor at the NFL level. I’m bullish on Herbert and not as high on Montgomery as others, so I’ll take a shot and hope he’s able to steal some touches.

In the third round I am once again shooting for upside. I have faith in Sean McVay and he made the move to get Atwell in the second round. His size is an issue, but I will hold out hope that he becomes flex viable down the road.

Wallace understandably took a dive in the rookie rankings when he was selected in the fourth round to a Baltimore team that had already used a first-round pick on Rashod Bateman. However, Wallace still possesses the same traits that caused many to fall for him in the pre-draft process. He’s got a “my ball” mentality and a notorious work ethic that will suit him well as he transitions to pro ball. I love his upside here in the middle of the third round.

Jordan was a lot of people’s TE2 pre-draft. He ended up falling all the way to the fifth round and going to the Texans. While this might not seem like the most desirable landing spot, Jordan immediately becomes their most talented TE and could step into an immediate impact role straight away in a Texans team struggling for talent.

While it broke my heart to see Williams fall as far as he did in the draft, I still think he posesses a lot of the skills to be very successful in the NFL if he ever gets his chance. He’s an alpha dog that I am more than comfortable with taking a chance on here in dart-throw territory. If Denver can get their QB situation figured out, I wouldn’t be suprised to see Seth win over at least the second or third pass catching option on that team behind Fant and whichever reciever can improve/stay healthy out of Jeudy and Sutton.

At this point I go for upside, and Stevenson has a little Blount to his game that could provide some good return on investment. I can’t complain on getting this type of upside late third round

Similar to Nico Collins, Palmer displayed talent on the field but was held back from producing big numbers by atrocious QB play. A late riser leading up to the draft, there was a lot of buzz in draft circles about this guy off the fantasy radar. The Chargers are an intriguing landing spot, and the draft capital investment (third round, 77 overall) reflects a high opinion from the NFL scouting departments and leads to a more likely breakout profile.

Tennessee Titans fourth round selection Dez Fitzpatrick has every opportunity to produce right away. Standing 6’2″ weighting 210 and posting a 4.43 40 yard dash at his pro day Fitzpatrick has the size and speed to earn an every down role alongside AJ Brown. With a whooping 215 vacated targets up for grabs seldom does a player with this much opportunity fall to the bottom of the 3rd round