Round 3 closes out the SF/TEP rookie mock draft. Who is the biggest steal in the third round. 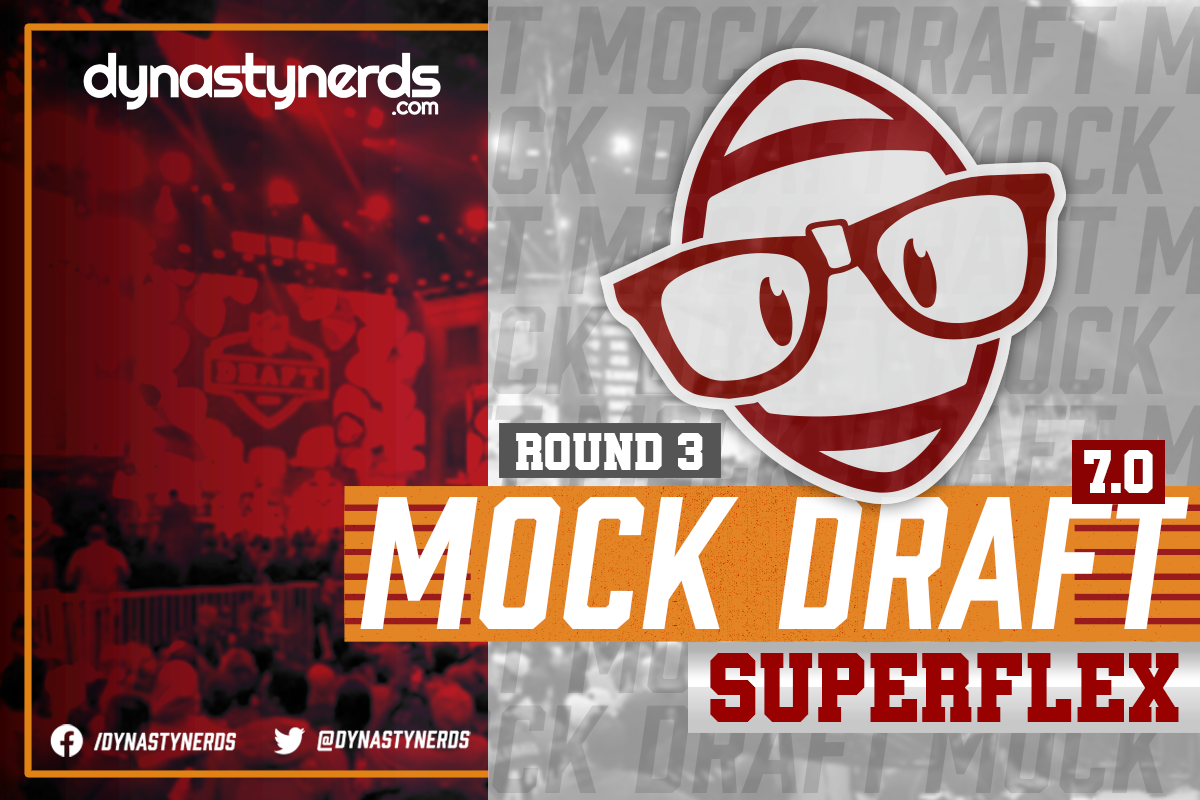 Let’s wrap up our Rapid Reaction rookie mocks with the third round selections. Things get a little crazy as we get later into our drafts. Who would you have taken? See anything surprising?

I was surprised to see all three day two quarterbacks slip here into the third round. This exercise was done within a vacuum, meaning these picks don’t associate with a dynasty roster. In existing leagues, roster-need and construction may push these quarterbacks even further up boards, likely to teams who missed on quarterbacks in the first. Kellen Mond is my favorite of the three compelling selections available here (Mond, Mills, Trask). From a talent perspective, Mond ranks closer to Mac Jones than to this grouping. Possessing the experience, accuracy, and playmaking ability to be a starter early in his career, don’t let the Cousins roadblock be the reason you pass on the talented Vikings backup.

Like waking up on Christmas morning with a present wrapped under the tree. I took the second-ranked ranked high school quarterback from the 2018 class in the first, so I’ll take the number one ranked quarterback from the 2017 class here. He has all the tools and may have a chance to play immediately in Houston. To be able to come away with a potential starting quarterback in the third round highlights just what a deep Superflex class we have in 2021. Absolute steal at this point of the draft!

I’ve always loved Tutu’s game-breaking ability but not his size. He got round two draft capital meaning Coach Sean McVay clearly has a plan in place to utilize him and his speed. In the third round you throw a dart and hope Tutu isn’t Tavon Austin reincarnate.

Usually drafting an undrafted rookie in the third round is pretty risky, but I’m all about upside in the third round and Hawkins has a ton of upside considering the RB depth for Atlanta. Mike Davis may be the lead back at the moment, but there is no evidence that Davis is a guaranteed lock as the RB1 for Atlanta. If Hawkins can win the job, he will be a borderline RB1 in fantasy in Atlanta’s high powered offense.

I admittedly was not a huge fan of Josh Palmer going into the draft. However, give him third round draft capital and pair him with Justin Herbert on a team with a thin wide receiver depth chart? Sign me up. I have a feeling where you can get Palmer today will be much cheaper than a few weeks from now once people put two and two together.

Going to Carolina to sit behind a banged-up McCaffrey, and with Mike Davis moving on, I’m hoping Hubbard can recapture the performance from his 2019 season. This is worth the flyer here in the third.

Trask landed in the perfect spot with Tampa Bay. He’ll likely get two years to learn under Tom Brady and Bruce Arians.

Gainwell landed in a spot that initially appears to be a little murky. With an already established RB in Miles Sanders his path to rushing attempts is a little limited. However, the upside he provides as a receiver provides immediate production on a team with frankly a lack of great pass catching options.

I absolutely love Harris’ upside. He’s 6-foot 4-inches and ran a 4.39 40. He got fourth round draft capital and could be a steal in rookie drafts.

I was very happy to land Eskridge here. He’s got draft capital on his side, an elite QB, and is just scratching the surface of his development as a full-time wideout. This is a great value pick with loads of upside this late in the draft.

Call me crazy, but I still believe in Brevin’s skill set. Sure, he didn’t test amazingly at his pro day, but he looks fast on the field. I still believe he’ll be a tough cover for linebackers in the NFL. I also like his landing spot in Houston where they don’t have an established tight end on the roster. At this point in the draft where it’s a crapshoot anyway, give me one of the top tight ends coming into the season who ended up with a team where he could see immediate playing time.

Rhamondre Stevenson was an intriguing pick the Patriots made in the fourth round. New England has Damien Harris and Sony Michel, but Rhamondre may be given a chance to earn some early-down work at some point in year one. Getting LeGarrette Blount vibes here with Rhamondre Stevenson. We are taking flyers at this point in the draft so why not take one on Stevenson at the 3.12?