The DynastyNerds team along with a few guest celebrities react to the NFL Draft with a mock rookie draft containing both offense and defense. 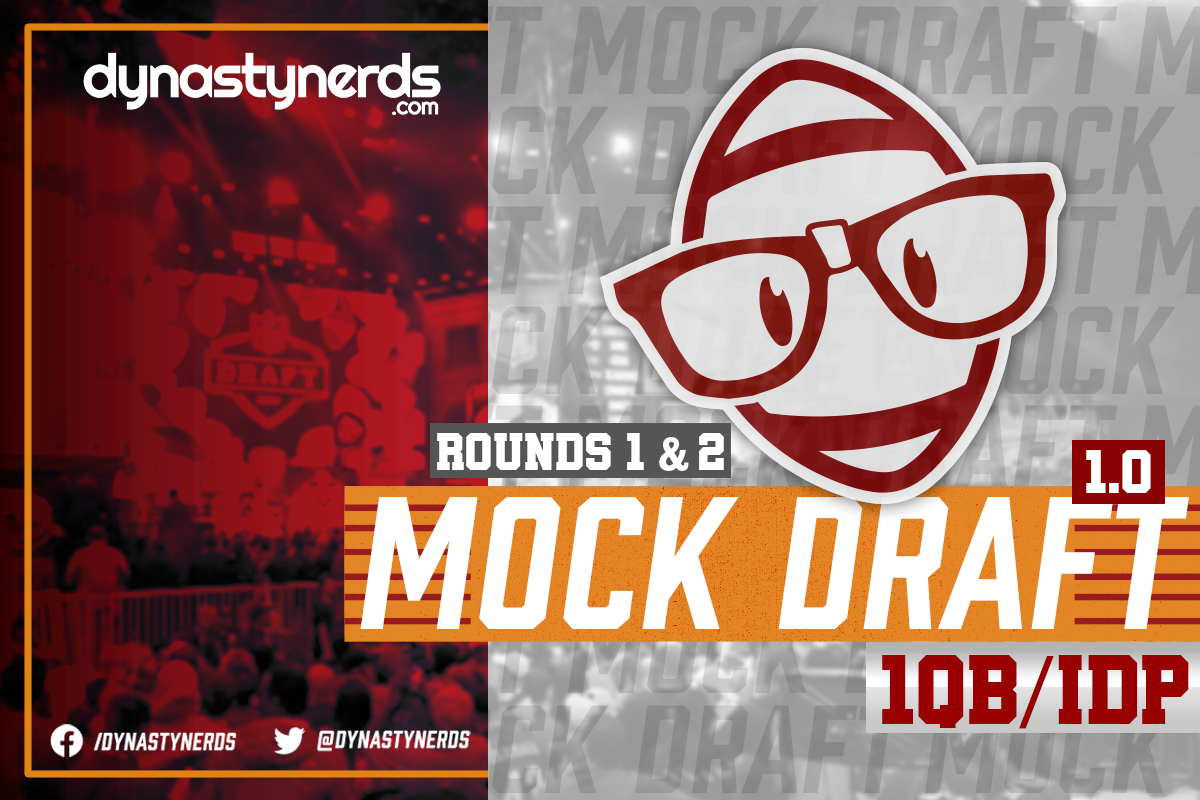 Where do the notable fantasy IDP names land among big names at quarterback, wide receiver, and running back? How early is too early to get your top linebacker or edge rusher? Here are the results from our expert mock using IDP123 to balance fantasy scoring for offense and defensive players.

The clear RB1 in this class. Najee should contribute right away, even with lackluster run blocking on the offensive line. The top guy of a very underwhelming RB class this year.

It’s an easy choice for me here to take the top WR off the board.

Pitts has the potential to be a transcendent athlete at the TE position. With off-the-charts measurables, he possesses the skills of a wide receiver in the frame of a tight end. I am happy to grab such an elite talent with my first selection.

I don’t expect Etienne to get the volume of a true locked and loaded RB1, but I believe the Jaguars turn it around under Trevor Lawrence. With the offense opening up more under Urban Meyer, Etienne will be the piece of the backfield that benefits the most. There’s upside for 2022 and beyond.

I keep seeing people hate his landing spot and lower his ranking because of it, which makes no sense to me in a dynasty league. Melvin Gordon has one year left on his contract, making Williams the RB of the future for the Broncos.

My top WR in this class, I ran to make this pick. With his familiarity with Hurts and little competition in front of him, he should be an immediate contributor. The Eagles finally got their WR pick right.

Waddle is my WR1, so this was an easy pick for me. It’s going to be fun to watch him pair up with Tua.

Baltimore needed wide receiver help, and they got a good one in Rashod Bateman. While the landing spot isn’t the most ideal, I think Bateman will turn into Lamar Jackson’s go-to guy. I was a big fan of Bateman pre-draft and am elated to land him here at 1.08.

Elijah Moore was among the most surprising day 1 NFL Draft snubs. The Jets capitalized on the slide, selecting Moore early on day 2 to pair with first-round QB Zach Wilson. Capable of being more than just a slot, Elijah instantly becomes the most dynamic player in this revamped Jets offense.

I will take my overall #1 IDP player, although I am not sure how the team will shake out as there’s a lot of talented LBs in Dallas and lots of questions. At the end of the day, Parsons is a guy with a safe floor and ability to make noise with big plays too.

Rondale lands in a great situation in Arizona where he can learn from DeAndre and AJ Green while preparing to take over the WR2 position. He is a tough WR to bring down and brings an element to the offense that they don’t have right now.

Michael Carter may have had one of the best landing spots for a running back in the 2021 draft. With virtually nobody to stand in his way and a beautiful outside-zone scheme fit that Saleh brings with him. Carter lands as my RB4 with the possibility to rise. The end of the 1st round is perfect for him.

Quarterbacks still carry the longest shelf life in dynasty fantasy football. I have no issues rostering Trevor Lawrence for the next ten years and not ever worrying about the position. Although his value won’t be as high in 1QB leagues, he will fill a need and set your dynasty team up for success.

This is where an offensive tier drop happens on my board, which makes it a good time to pivot to the defensive side of the ball and grab Jamin Davis.

The Niners invested significant draft capital in trading up to acquire Lance, and it’s clear that they believe in him as the face of their franchise. Though short on experience, he’s got raw athleticism, he throws a very catchable ball, and he possesses the mobility to be a dual-threat. I love his upside in the early second, despite the 1QB format.

With my tier 1 IDP choices both off the board, I pivoted to the remaining high-end offensive talent that fell as a result. It was a tough decision between Sermon and Marshall, but I was a fan of Sermon pre-draft, and they have used a rotation lately only because they haven’t drafted someone with this level of talent since Carlos Hyde.

In a non-Superflex leagues, I feel comfortable taking a rookie QB with high upside in the second round. The Bears gave up a lot of capital to get Fields, so they will do everything they can to help him succeed.

Still a little too early for me to jump into the IDP pool here with high upside receiving talent still on the board. Marshall has elite tools and upside. This is great value at this spot.

Even though he fell into the fourth round of the NFL Draft, St. Brown should make an immediate impact with Goff in Detroit.

Arizona added yet another talented first-round linebacker to their defense. They have already come out and said they plan on using Collins in the middle at Mike linebacker, and that’s exactly what I wanted to hear. Collins has the size, athleticism, and potential role to be an immediate impact player for IDP. Sign me up!

I’m willing to overlook the analytical red flags on Toney’s profile at this stage of the draft. Toney has first-round draft capital and impressive film in 2020. Target competition in New York could limit Toney’s immediate fantasy upside. With Evan Engram and Sterling Sheppard likely to be free agents in 2022, I’m willing to wait.

This is an IDP mixed-mock, and like Naughty by Nature, I am down with IDP. Phillips has the highest upside as an edge rusher in the class but the scariest injury history. He has a chance to be the cornerstone of a young Dolphin defense; I like him to hit DE2 numbers year one and only get better.

I debated going defense but felt it was too early, so I’m taking a flyer on a QB who is being handed the job in New York. The Jets have struggled to find the answer at this position. Wilson is a modern-day QB with his mobility, off-script play, and solid accuracy. It’s just a matter of getting that to translate at the highest level of football.

Azeez Ojulari may be the best pure pass rusher in this draft class. His speed rush is dominant off the edge, and he has a plethora of moves to boot. Ojulari landed in a great spot in New York, where the team was barren at EDGE. The Giants have great interior pressure, which will also funnel more outside for Ojulari to gobble up.