5 star recruit to top 5 NFL pick? @zackzander dissects the good, the bad, and gives his NFL comparison for Justin Fields. 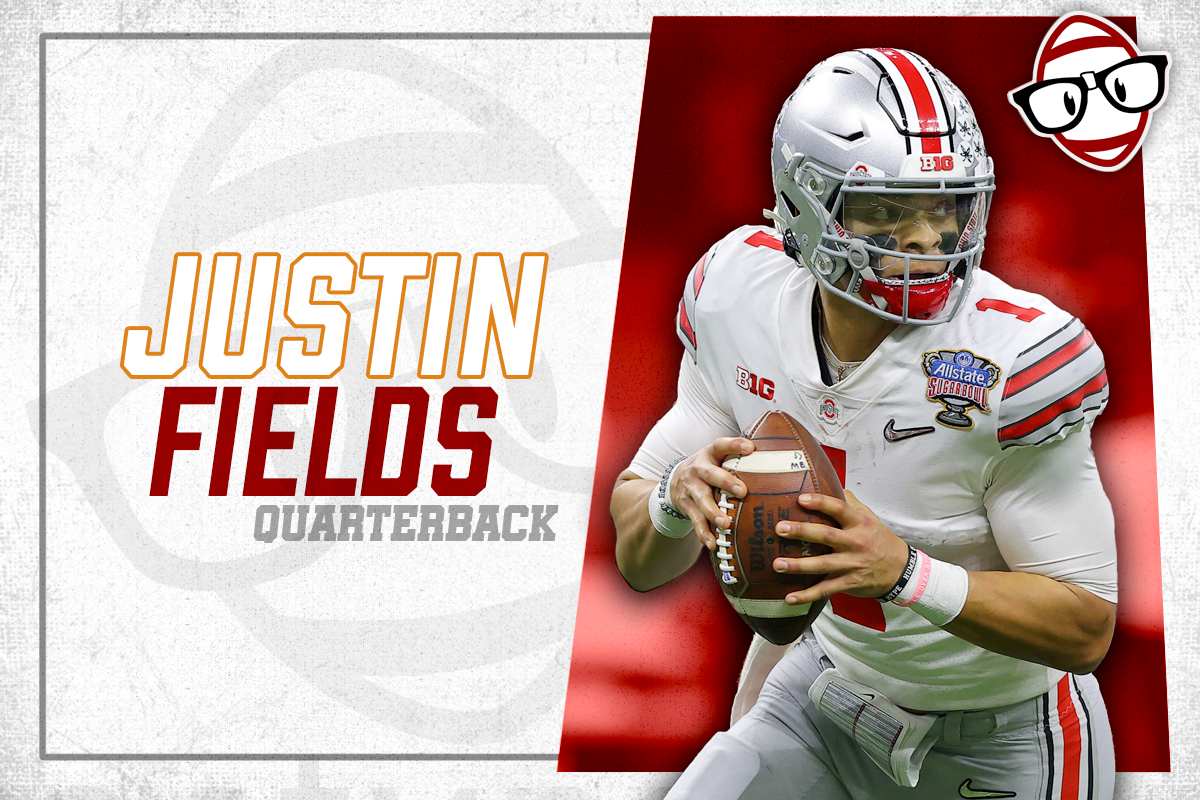 Justin Fields was a two-sport standout for Harrison High School in Kennesaw, Georgia. Fields was a gifted baseball player but was known more for being an absolute superstar quarterback on the football field. At the Elite 11 quarterback competition, Fields amazed scouts with his arm talent and was named the most valuable player. Every top recruiting service labeled him a five-star prospect, and ESPN had him ranked over Trevor Lawerence as the No. 1 player in the country. He finished his high school career by being named Mr. Football in Georgia and stayed local, choosing the Georgia Bulldogs as his college destination. Fields later transferred after one season to Ohio St after backing up Jake Fromm in 2018.

In his only season at Georgia, Fields was used more as a gimmick player and attempted only 39 passes. Georgia utilized Fields more as a runner collecting 266 yards and four touchdowns to go with his four passing touchdowns. Things changed quickly for the star QB when he transferred to Ohio St. and was named the starter. Fields started hot and stayed sizzling the entire season accounting for 51 total touchdowns and only three interceptions. Entering 2020, Fields was on a short list for the Heisman Trophy, and he did not disappoint. After three games, Fields had 11 touchdowns and only 11 incompletions as Ohio State rolled over opponents. Despite playing in only eight games, Fields still was extremely productive, finishing with 2,100 yards passing, 383 rushing yards, and 27 total touchdowns.

Justin Fields has everything the modern-day NFL looks for in a quarterback and has even exceeded the expectations put on him since high school. Arm strength, quick release, and pinpoint accuracy explode off the tape for Fields. His compact throwing motion instantly gets the ball out of his hands without losing any steam on the throw.

Fields can make any throw on the football field with accuracy, timing, and enough zip that even seasoned defenders get caught out of position. The football launches out of his hands like a rocket on deep throws, and he makes 60-yard bombs look effortless.

Fields always seems to have complete control of the offense as he dissects the defense easily pre-snap, putting his team in the correct play. In the pocket, he displays excellent footwork, quickly setting his feet, allowing him to step into all of his throws. When pressured, he shows rare strength for his position, breaking loose from defensive players and saving a potential loss of yards. On bootlegs and roll outs, Fields throws with both power and accuracy. He is consistently hitting receivers in stride. In the open field, he shows off his agility making defenders miss while also possessing the strength to run over them. Justin Fields is the complete package!

You must dive deep into the film room to find weaknesses in his game. But some issues need to be worked out at the next level. The most glaring weakness is his progressions after he completes his first look. He stares down his first read and too many times opts to start to scramble instead of checking the ball down.

Fields often struggles to keep his head up and extend the play and find the open receiver when scrambling. He scrambles to run, not throw. Even though he is a gifted athlete, he misses chances for plays downfield along with putting himself in harm. On far too many occasions, the ball comes out fluttering and wobbly, creating more difficult receptions for his pass catchers.

I see Justin Fields transitioning into the NFL with the same ease that Dak Prescott did back in 2016. Fields and Prescott share the same size and athletic ability. Both can run but much rather throw from the pocket with anticipation. Accuracy and timing are both humongous strengths as each QB leads their intended receiver perfectly for YAC. Leadership and accountability resonate with these QB’s, and they make the guys around them better. The one thing that separates the two is Prescott has a nice arm while Fields has a great arm. His arm talent will easily be top ten the moment he enters the NFL.

Justin Fields is my unquestioned QB2 in a loaded 2021 NFL draft for quarterbacks. In fantasy football, Fields offers instant value because of his insane skill set and running ability. Fields will be a hot commodity in Dynasty, but his stock will be scorching in super-flex formats. Fields is my second-ranked player in rookie drafts overall in SF and my 18th overall player in 1QB. In startup drafts Fields, comes in at QB9, 13th overall in super-flex, and 90th overall in 1QB.