Gage Bridgford (@GbridgfordNFL) looks at one of the rising wide receivers in this year’s draft in Clemson’s Amari Rodgers. 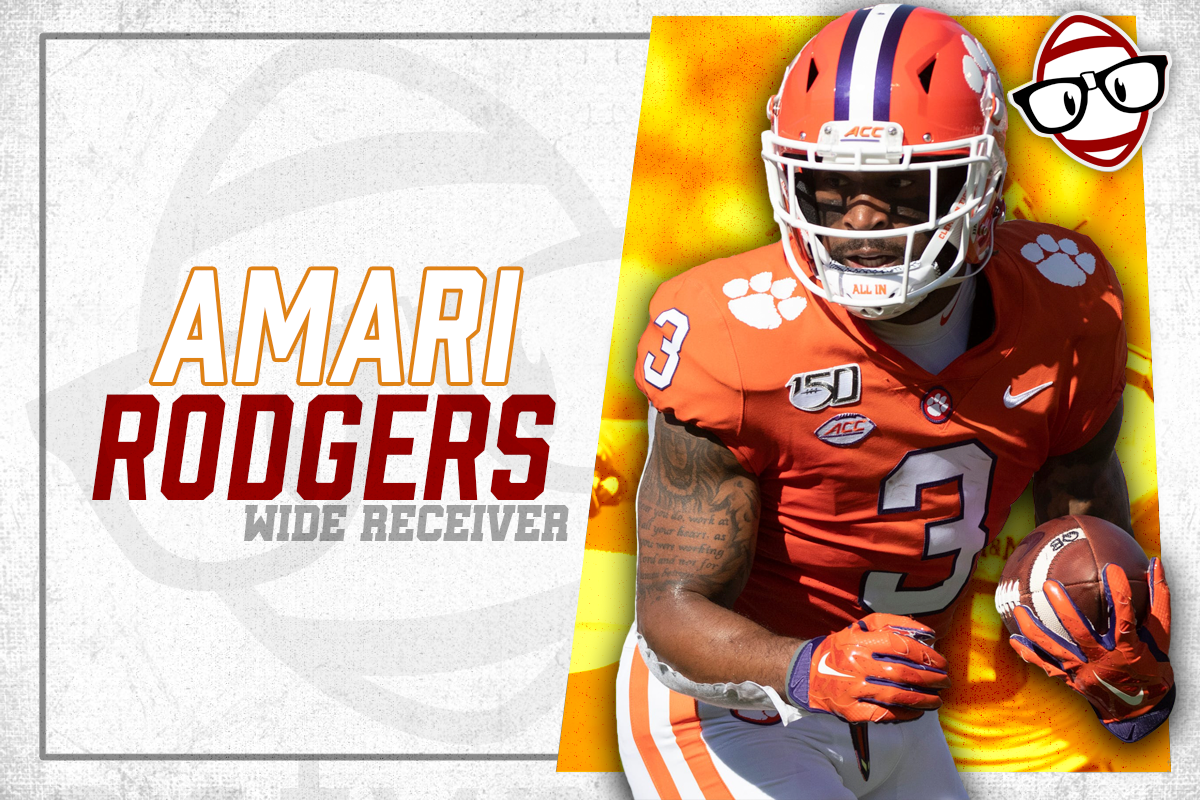 A four-star wide receiver out of Knoxville, TN, Amari Rodgers wasn’t the star of the Clemson Tigers’ 2017 recruiting class. He had five-star wideout Tee Higgins ahead of him along with Clemson staples Hunter Renfrow, Deon Cain and Ray-Ray McCloud. The following year, they added Justyn Ross and Derion Kendrick, who transitioned to corner after his freshman season. Rodgers never let all of the high-profile guys affect his confidence as, in his final season on campus, he finally hit the breakout we’d all been looking for.

One key skill for Rodgers has been his availability throughout his career, which is something all NFL teams will be searching for in this draft class. He played in 14 games as a freshman before starting all 15 games as a sophomore. After tearing his ACL in March 2019, it was presumed that he would miss all of his junior season, but, after an intense rehab, he was able to return for the second week of the team’s 2019 season.

Rodgers was able to shine during the 2020 season due to the drafting of Higgins and a neck injury that was discovered on Ross. With Rodgers as the leading man alongside Cornell Powell, he put on display his skills which quickly pushed him up draft boards. His hard work and determination will endear him to NFL teams as he’s unlikely to be drafted in the first two rounds. They could see him as a player with a versatile skillset that can further open up their offenses.

It took him a few years of scrapping for playing time and touches, but, once Rodgers got that workload, he never looked back. After totaling 1124 receiving yards and eight receiving touchdowns through his first three seasons, he ran up 1020 yards and seven touchdowns during his final season. The progression for Rodgers could not have come at a better time for a guy looking to boost his draft stock in a crowded wide receiver class.

The main thing that Rodgers showed during this final season was his ability to handle an elevated workload as a team’s primary offensive weapon. Running back Travis Etienne led the team in yards from scrimmage, but Rodgers led the team in receiving yards and receptions while being tied with Powell for the team lead in receiving touchdowns.

Rodgers is not going to be a team’s primary receiving option at the NFL level, but he can fill a role as a player that team’s will look to manufacture touches for. With the success that we have seen from players such as Deebo Samuel and Curtis Samuel, there is a clear role for Rodgers at the next level because teams are always looking for guys that can make something out of nothing.

Rodgers isn’t the smallest receiver in this class, but he’s definitely not the biggest. Despite that, he has no problem winning at the catchpoint when he’s contested. On this play against future starting NFL cornerback Troy Pride Jr., Rodgers gets hit as the ball is arriving, but it doesn’t matter. He catches the ball away from his body before reeling it in to hold it throughout the process.

This is the first example of one of the main ways that Rodgers is going to win at the NFL level. One of the more common comps for Rodgers throughout the pre-draft process has been San Francisco 49ers’ wideout Deebo Samuel, and this is one of the ways that we see Samuel used often. Clemson throws a quick screen with one blocker in front of Rodgers, and it’s his job to make one man miss. He does that, and it turns into a solid gain.

Rodgers makes plays happen after the catch. Again, Samuel has been one of the common comps because he has been a YAC machine the first two seasons of his career, and that’s something that Rodgers did well at Clemson. On this play, he takes what looks like it’s going to be a five-yard gain and then he goes to work. He sends a defender flying past him when he stops on a dime, turning it into another 20 yard gain. This is how Rodgers wins.

There have been a lot of short throws in this film section. More than likely, that’s how Rodgers is going to be used at the next level. On an NFL team, Rodgers will run this same play early and often. He’ll catch a ball rolling out on the screen and it’s his job to get into the end zone. More often than not, he’s going to get there because he’s more athletic than opposing defenses give him credit for.

Rodgers is never going to be a true alpha X receiver at the next level, and it’s going to be pivotal that he lands in an offense that doesn’t require him to be a stereotypical wideout. Rodgers is able to generate some separation with his route-running skills more than he does with raw speed and athleticism.

He’s able to run the jet motion that has become prevalent in just about every offense around the league, and he has a chance to get drafted on Day 2 or early Day 3. For fantasy, it’s not clear if he’s going to be operating in a featured role, so he’s nothing more than a Round 4 or 5 type of player in rookie drafts.