Who doesn’t love gettin’ “nerdy” with 2021 rookie prospects? @KayneRob brings you the details on what to expect of USC Trojan WR Amon-ra St. Brown. 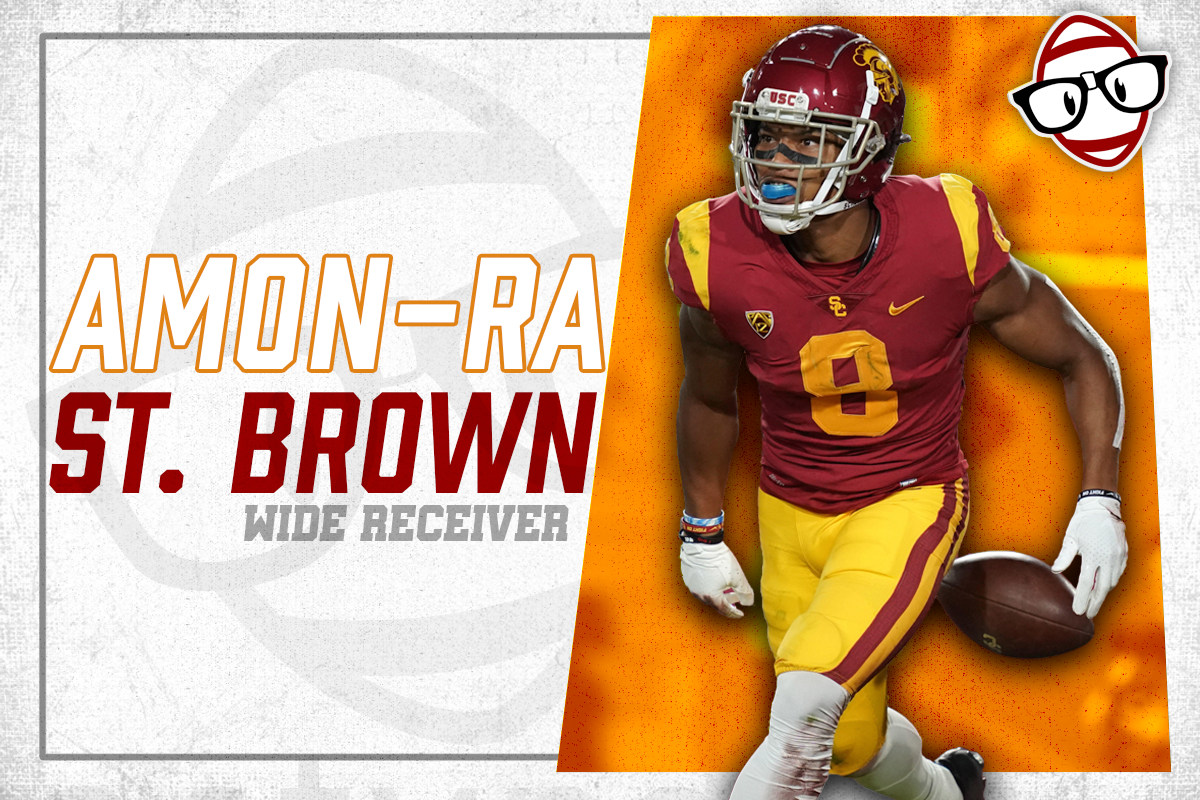 The youngest of the three St. Brown brothers playing football, Amon-Ra may be the best WR in the family, but can he be a number one option at the next level?

Amon-Ra started hot in his freshman season, commanding a 21% target share and posting 750 receiving yards and 3 TDs on a team-leading 60 receptions. He followed up a solid freshman year with his best statistical season. Sophomore year St. Brown caught 77 receptions for 1,042 yards and 6 TDs. He also saw 60 yards and a TD on the ground. Most of these numbers were 2nd on the team to Michael Pittman Jr, but his 20.6% target share remains a strong constant from year to year. Although the stats weren’t technically as high Junior year, this was mainly due to a shortened season for all of the Pac 12 conference. That said, Amon-Ra still was #1 overall in receptions (41) and receiving touchdowns (7) within all of the Pac 12. He finished the six-game season with a 22.3% target share.

With a relatively successful statistical career at USC, the main things that help make him a solid prospect in this 2021 class are his 22.3% total target share, 33.1% Dominator rating, and a breakout age of 18.9! He also had a solid 25% MS REC Yards.

Overall, Amon-Ra St. Brown proved to be a reliable option at a wide receiver that can take over and do whatever the team needs. That said, he was never able to lead his team in receiving yards and often served as the 2nd WR to some extent.

Amon-Ra is excellent when it comes to footwork, both off the line of scrimmage and mid-route. His control and foot speed allow him to set up the defender and create separation for an opening at the break of his routes.

Outstanding in the Open Field

Not only is St. Brown solid at creating separation within the middle of his routes, as stated above, but he also understands how to read a zone. Amon-Ra understands how to find the hole within a zone defense, and his ability to sit in this opening while remaining in his QBs line of sight is impressive—remaining active within the play. This trait is heavily undervalued as it is more instinct rather than learned.

Amon-Ra always has an excellent feel for finding and tracking the ball, especially in one on one matchups. This is demonstrated in the very first clip shown, as well as the clip right above. Amon-Ra effectively gets his head around at the apex of his route and tracks the ball down in a minimal timeframe.

One thing that was great to see during his time at USC was his fully expanded route tree usage. He was used in a variety of ways and was sharp and clean in running all routes. The Trojans used him at all levels consistently. Not only that, but they lined him up on the outside, in the slot, and even in the backfield. He is hard to take down in the open field and understands how to read holes even in the backfield. His instinct and ability to read the field will be a huge plus at the next level.

Amon-Ra plays through the whistle. Whether running routes or blocking, nothing is half-hearted, You don’t see this as consistent with most WR prospects, but I was impressed with the effort and solid skills. His 6’1″ frame is built to be suitable, and he is great at using his frame to stabilize and control, not getting easily thrown aside by defenders.

Amon-Ra did show some issues with drops at times throughout his collegiate career. Hopefully, this doesn’t plague him at the next level, but I am sure his WR coach will have him on the jugs machine early and often.

ESPN has his last official 40 time at a 4.67. This time can be manageable at the next level, but it doesn’t do him any favors. Luckily, some of his game’s vital traits may lend him the ability to offset his speed in certain matchups.

Amon-Ra St. Brown is a rock-solid wide receiver prospect in this deep 2021 class. St. Brown projects to be a day two pick, possibly an early to mid 2nd round guy. I have him as a tier 2 guy with the likes of Bateman, Waddle, and Moore. Although his ceiling likely isn’t as high as these prospects, the well-rounded effectiveness he brings makes him a solid WR2 type player with upside. His route running and separation should translate very well at the next level. A player he reminds me of at the next level is Tyler Boyd. A guy who has both the physical tools and can win a contested-catch when needed. Like Boyd, he understands where to be and how to separate, which helps him win matchups. The real question remains can he develop to be an alpha WR, or will the secondary role be more of a constant.

Subscribe to the #NerdHerd and check out many of the game films for Amon-Ra St. Brown– we have three games, and our team is working on adding more every day! Check out the site to learn more about the 2021 draft prospects.