Gage Bridgford (@GbridgfordNFL) looks at one of the fastest wide receivers in this year’s draft in Auburn’s Anthony Schwartz. 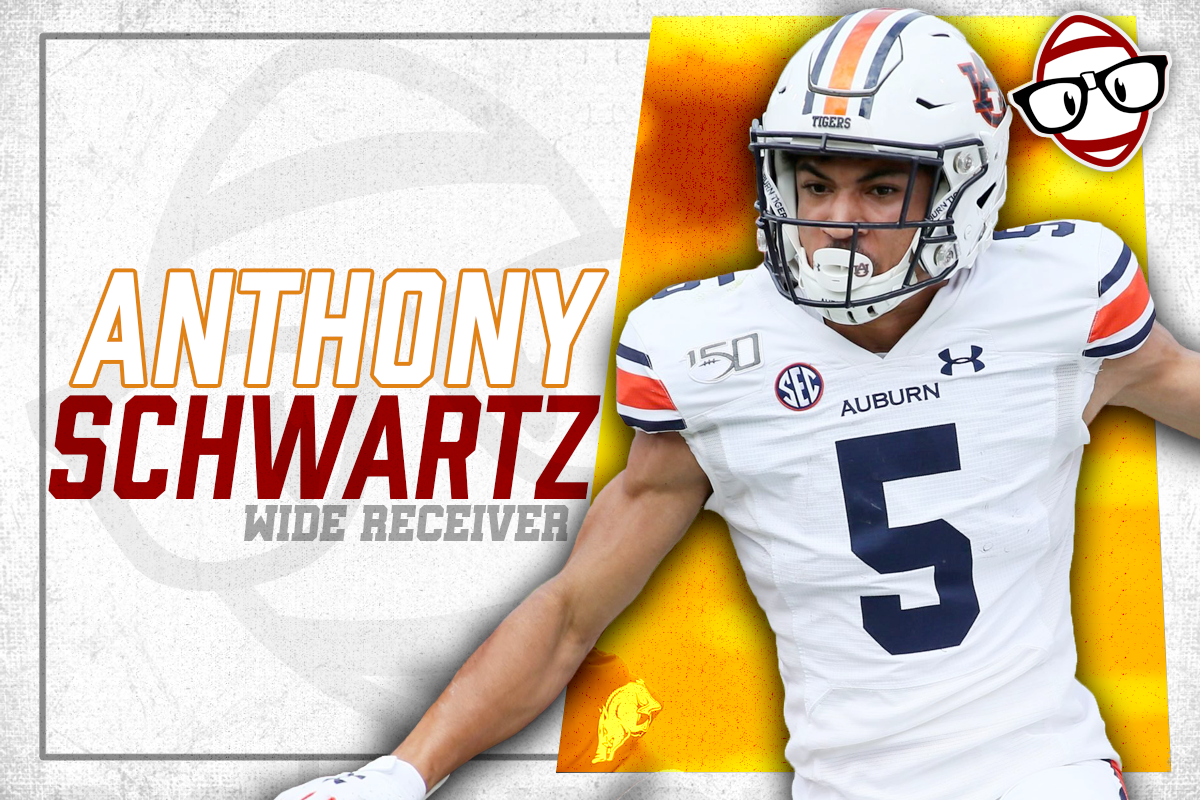 Four-star wide receiver Anthony Schwartz wasn’t the most highly recruited wide receiver out of the state of Florida in the class of 2018. He was the fifth-ranked WR in the state that year, but he would have been the top player at the position in 38 of 50 states. Now, he has a strong chance to be one of the first receivers from the class drafted. During his three seasons at Auburn, he displayed speed and versatility, which help him stand out in the loaded receiver class of 2021.

In June before his senior year of high school, Schwartz burst onto the recruiting scene. Besides football, he was a standout track athlete. He set the U.S. record for the fastest 100m run by an athlete under 18 when he was just 16 years old by running at 10.07 seconds at the Florida state finals meet. The record still stands nearly four years later.

Schwartz has played in 33 games while competing for the school’s track team along with the Team USA’s U20 team. One primary key for him versus some other speed receivers in this class will be his size. Traditionally, sprinters that play football are much smaller than most wideouts. For Schwarz, that’s not the case, as he’s likely to weigh in at least 190 pounds during the pre-draft process. With world-class speed, teams will be giving a hard look to a guy who can open up their offense.

If Schwartz had played in a more imaginative offense, he may have been putting up some eye-popping numbers. He totaled 1,746 yards from scrimmage during his career. To put it in perspective, former Oregon WR De’Anthony Thomas ran up 3,186 yards during his three-year career, as well as 2,159 on returns. Auburn never allowed Schwartz an opportunity to return kicks during his school career.

Schwartz will be drafted for his traits, the lack of production won’t make him money. Auburn’s offense averaged just 25 PPG, ninth in the SEC and just above half of what in-state rival Alabama averaged. Schwartz’s explosiveness wasn’t utilized appropriately, as, despite being a sprinting record holder, he averaged just a measly 12.2 yards per reception.

After getting 27 carries as a freshman and five rushing touchdowns, he totaled just 15 carries over the following two seasons and scored only twice. The team tried to get him the ball more as a receiver and could have utilized him in multiple ways. A successful NFL career will see him getting moved all over the formation and getting touches everywhere.

Schwartz obviously has the raw speed to sprint past opposing defenders, but he also has great acceleration. On this play, he gets lead too far towards the sideline and is forced to slow down to stay inbounds entirely. Despite getting to zero, he’s able to get back up to speed and get the first down. Most players don’t have that juice that Anthony shows on this play.

Speed receivers generally don’t get credit for their ability to make catches with a defender in close coverage. With Schwartz, that wasn’t the case. For one, he was often generating separation that gave him room to work. Additionally, on this play, one of the rare contested occasions, he does an excellent job of presenting his quarterback a safe window. He boxes out the corner for the easy pitch and catch.

Watching the Auburn offense work was frustrating. Too often, the offense could not highlight his game-breaking speed. They hit him with a quick screen on this play, and he uses that speed to make a play happen. He gives his blockers time to get in position, and it’s a foot race between him and the defense. More often than not, he’s going to win that race.

Schwartz is stupid fast. That’s not descriptive or the best term to describe it, but it’s the truth. On this play, Schwartz makes a quick stutter step at the line of scrimmage. He blows past the cornerback, and if his quarterback were able to him in stride, he’d breeze in for the score. Blazing speed is his elite trait; there aren’t many corners that will keep up with him step for step.

Schwartz is never going to be the lead wideout on a team. He can be a featured part of an offense, but he’s not going to be the guy that a team builds their passing attack around.

Schwartz’s explosiveness is a skill highly sought after by NFL teams. Look no further than the 2020 draft, which saw Henry Ruggs get drafted ahead of guys like Jerry Jeudy and CeeDee Lamb. Speed, especially world-class speed, can’t be taught, and teams will find ways to get Schwartz on the field. If he can impact and develop early on, he’s going to be a player that fantasy managers will be clamoring for, thanks to his big-play ability.

Join the #NERDHERD to get access to a vast film room with prospect videos second to none!