Brevin Jordan had a productive career at Miami, but it seems that he is being slept on with all the hype around Kyle Pitts. Here’s why you should be happy to land Jordan in 2021 rookie drafts. 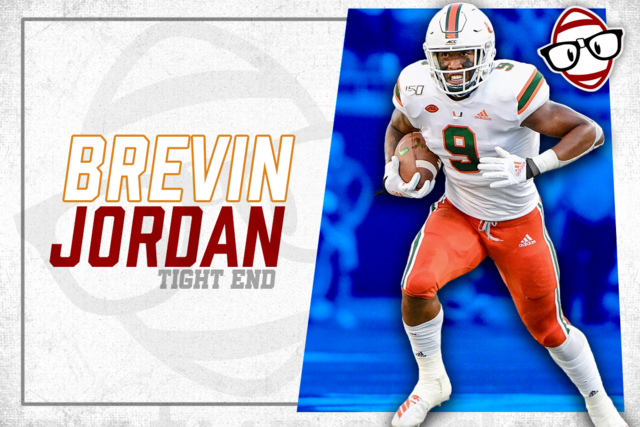 Brevin Jordan is a very athletic and promising prospect at the tight end position. Unlike last season, this 2021 tight end class has a lot of promising prospects at the top. The top three prospects this year would arguably all be the top tight end in the 2020 class. Brevin Jordan, Kyle Pitts, and Pat Freiermuth lead the class, with Kyle Pitts as the obvious choice for most when it comes to the top tight end prospect. Due to his dominance this year, the other two are getting nowhere near the attention they deserve. With Pitts as the TE1, who is the TE2 in this year’s class then? I’m going to look into why Brevin Jordan should be the TE2 in rookie drafts this year.

As a true freshman, Jordan was the team’s 3rd leading receiver. Even though the team didn’t have many combined receiving yards (2,175), Jordan had 13.2% of those yards with 287. It’s good to see that he made that kind of an impact as a freshman. On the first play of the Virginia Tech game, Jordan hurt his ankle and missed the rest of that game and the following game against Pitt. He ended the season with a college dominator rating of 17.13%.

As a sophomore, he finished as the team’s 2nd leading receiver with 495 yards (15.28% of team receiving yards). He was a John Mackey Award finalist for the nation’s best tight end. Unfortunately, Jordan suffered an injury against Florida St. late in the season and ended up missing the last four games of the season. If you take away those four games and do a game-adjusted college dominator, you will get 15.77%. He led the team in receiving at the time of injury but only had two touchdowns, which brought the dominator rating down.

In his final season at Miami, Jordan finished as the 2nd leading receiver on the team again with 576 yards (18.89% of team receiving yards). He managed that while once again missing some action due to injury. This time it was a shoulder injury that caused him to miss three games in the middle of the season. If we take out those three games and do another game-adjusted college dominator rating, you will get 35.76%.

Brevin Jordan is a playmaker. In the clip below, you will see him catch a simple pass at the line of scrimmage and demonstrate a good burst to pick up speed. He then hurdles the defender showing his athleticism while almost maintaining enough balance to get the score. He steps out before he can reach for the endzone.

To continue on Jordan’s playmaking ability, I wanted to point out his ability to get yards after the catch. According to this tweet below by PFF College, Brevin Jordan finished 1st among tight ends in yards after the catch this season. He has the speed to break away from a defender after the reception and also has the strength to break tackles to gain extra yards.

Brevin Jordan was used all over the field for Miami and was used in the slot frequently. He can win in his routes all over the field. In the clip below, you will see that Jordan is able to get the defender to bite when he fakes going out but then cuts into the wide-open field for the easy long gain.

For a tight end, Jordan is good at running his routes and has a good release. I like his release off the line here in the clip below. He gets past the defender with ease, but the defender was able to recover and break up the pass. It’s hard to tell how much the defender impacted the catch, but it seems as though it was a good defensive play. The throw was a little late and slightly behind Jordan.

I want to dive into a new tool over at campus2canton.com. With this tool, I will take a look at EPA (Expected Points Added) and Reception Yards Per Team Passing Attempt. First, we will look at EPA, which is a metric used to determine how a player on specific plays increased the projected score for their team on a particular drive. This will indicate success on crucial plays when the player puts their team in a better position to score.

As you can see in the chart, Brevin Jordan was last in EPAPerPlay in both his freshman and sophomore seasons but was 1st in his junior year among the tight ends chosen. I chose to include Noah Fant and Evan Engram in this chart because I have seen multiple comparisons to those two for Brevin Jordan.

The next chart we will look at for these tight ends will be Receiving Yards Per Team Pass Attempts. This metric shows efficiency and how important of a role a player is in their offense. It’s good to see Jordan improve each season in this metric.

Overall, Brevin Jordan has a great profile for a tight end prospect, but there are some flaws. Some of these can be fixable, and I don’t think they should cause too much concern.

Contested / Contact Catches & Body Catches: I noticed when watching film that he seems to rely a little too much on body catches. I would like to have seen him demonstrate good plays with hand catching more often than he did. As far as contested receptions, it does seem that he could improve in this area. There were honestly very few examples in the film that I watched, so I don’t want to sound overly critical about this. He can do it and showed it here in this clip below. He knows the hit is coming but is able to take the hit and hang on to the ball.

Blocking: I would personally label Brevin Jordan as an average blocker. There were times that I saw him let a rusher through really easily. He does have his moments as a good blocker, but overall, I think he has room for growth. I don’t see this impacting his ability to perform at the next level, though. I think whoever drafts him will utilize him as a receiver enough to where the blocking might not matter much.

Injuries: From my research, Brevin Jordan has missed a total of 9 games out of 37, which would be 24% of his career games. Hopefully, he can endure the NFL life, and his body holds up. I don’t want to label him as injury-prone, but it is something to consider.

I think that Brevin Jordan is going to be an excellent value in rookie drafts. Everyone is so enamored by Kyle Pitts (rightfully so) that Jordan is an afterthought. Many analysts in the dynasty community have Freiermuth as the TE2, so it’s possible you can snag Jordan at the end of the 2nd round or even 3rd round of most rookie drafts. He is going to be a solid playmaker on the team that drafts him.