Short on playing time but long on talent, let @Spydes78 introduce you to LB Cameron McGrone. 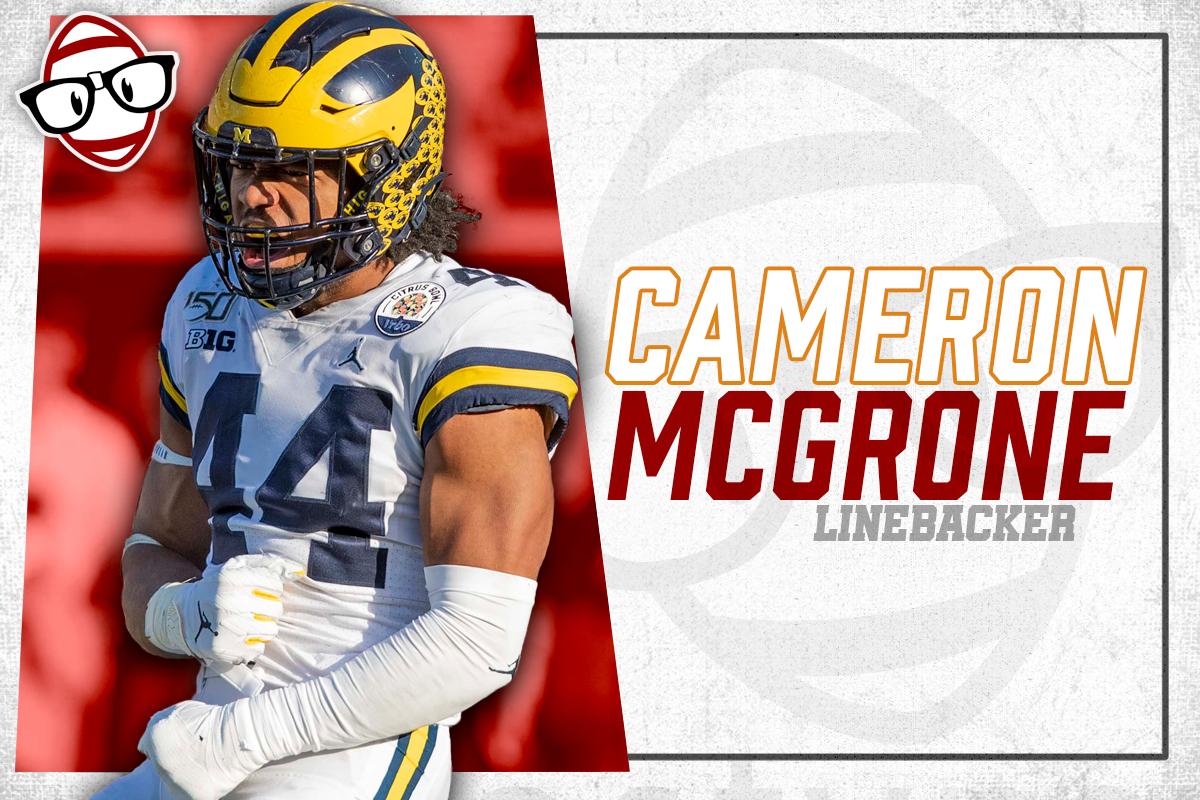 Welcome back for another deep dive into the IDP prospect pool. I hope you brought your floaties because, in this installment, we wander a little further into the deep end with a look at University of Michigan linebacker Cameron McGrone.

McGrone is, without question, a prospect bursting with potential. He hails from Indianapolis, IN. As he finished his high school career, 247Sports rated McGrone as the top recruit in his state. Sites like ESPN and Rivals recognized him as a 4-star recruit. After a redshirt freshman year with Michigan, McGrone earned his way onto the field. In 2019, he became a significant contributor.

Then came 2020 and all the adversity attached to it. McGrone, like every other collegiate athlete, had to combat COVID-19 and the rules and regulations with it. Unfortunately, McGrone also had to deal with an injury he suffered in the fifth game of the season against Rutgers University. Michigan never released details of the injury to the public, so we don’t know its severity. McGrone required a cart ride to get off the field, and his season ended prematurely.

Despite that, McGrone declared for the NFL Draft in December, forgoing three years of college eligibility. With the absence of a 2021 NFL Combine and an abridged collegiate career, McGrone is undoubtedly a ‘tea leaves’ prospect. Fortunately for you, I have watched the tape and am fully prepared to share my thoughts with you.

The first trait that pops out when studying McGrone is the energy he brings to the game. On a defensive unit, middle linebackers often take on the leadership role. That could cover anything from play-calling to setting a tone, and this is where McGrone excels. He attacks every play with an unmatched level of enthusiasm that fuels his teammates.

Hall of Fame head coach Tom Landry once famously said, “Leadership is a matter of having people look at you and gain confidence.” There’s no doubt in my mind that Landry would’ve taken note of McGrone.

Ultimately, as IDP dynasty owners, we’re on the hunt for tackles. Regarded as the crown jewels of IDP, middle linebackers have high exposure to the game action. I’m pleased to report that McGrone has shown a nose for the ball. Granted, we’ve only seen it in a limited time frame.

Though McGrone closes the book on his college career logging only 18 games, he’s recorded 92 combined tackles. That’s an average of more than 5 tackles per game. It’s not luck that fuels these valuable stats. When you study McGrone’s film, you see a stout tackler who routinely wrestles the ball carrier to the ground with sound form. You can see McGrone’s ability in this penetrating run stuff of RB J.K. Dobbins, whose currently a contributor in the Baltimore Ravens backfield.

At 6’1″ tall and weighing 236 pounds, McGrone has a prototypical build for the linebacker position. He possesses sufficient mass to withstand repeated contact punishment, combined with a nice burst of speed. McGrone uses this quickness in a variety of ways.

With pro offenses consistently employing spread concepts, one of the primary requirements of an NFL linebacker is to patrol the field from sideline to sideline. McGrone checks this box by demonstrating ample ability for lateral movement. Watch him defeat this sweep by anticipating the play and tackling the running back for a loss.

Sure blanketing field coverage is nice, but what about splash plays? Well, McGrone utilizes his standout athleticism to harass the quarterback. Michigan often dialed up blitzes to leverage this ability, and McGrone didn’t disappoint. Observe this clip from 2019 where he sacks University of Iowa quarterback Nate Stanley.

I have already cataloged it pretty extensively, but McGrone has had an illustrious but short college career. The talent is undeniably there, but it can be dangerous to expect success from talent alone. You likely recognize that, and so does the NFL.

Will inexperience cause him to fall on draft boards this spring? If so, will a lack of draft capital jeopardize McGrone’s ability to ascend a depth chart and make real on-field contributions? None of us can answer these questions, but you’d be wise to consider the concern in your evaluation of McGrone.

Another negative that I noted in my evaluation of McGrone was that he could struggle to get off blocks. He can get gummed up on the second level, particularly when locked onto by larger blockers. I don’t believe this will be a fatal flaw in McGrone’s game. These problems are likely a product of his inexperience. With good coaching, he can correct this aspect of his game. However, it’s worth noting as an area of his game that will need improvement at the next level.

McGrone is a bit of a paradox. He’s an appealing prospect with great traits who can develop into a significant contributor in IDP leagues. However, he’s going to be a bit of a project for his NFL team. Since McGrone needs a fair bit of coaching and development, dynasty owners who target McGrone shouldn’t expect an immediate return on investment.

McGrone should be selected somewhere in the third to the fourth round of the 2021 NFL Draft. Given the overall talent and depth in this class, I wouldn’t recommend that you spend pick on him in the first five rounds of your rookie draft. However, if you have the roster depth available, McGrone represents an excellent undrafted free agent stash opportunity.

Thanks for reading through this draft profile spotlight. I thoroughly enjoyed bringing you this piece and would love to continue the conversation on this prospect. Please feel free to comment below or contact me @Spydes78 on Twitter. And also, stay tuned to @DynastyNerds for a steady pipeline of content from our eminently qualified staff to carry you through your offseason. Enjoy the grind!