Gage Bridgford (@GbridgfordNFL) looks at one of the fastest wide receivers in this year’s draft in Louisville’s Tutu Atwell. 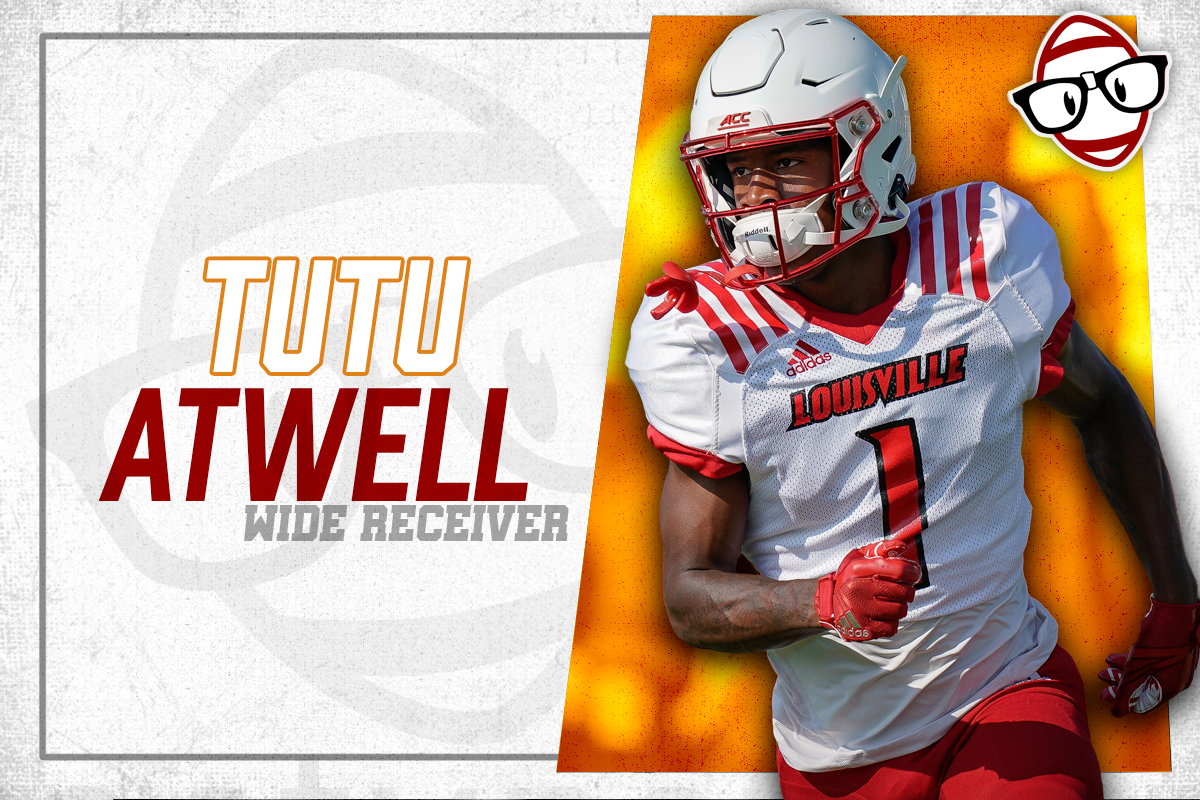 A three-star athlete recruit out of Miami, FL, Chatarius “Tutu” Atwell had something to prove from the moment he got on campus at Louisville in the 2018 season. At 5’9″ and 156 pounds, and overlooked by just about every major program in the country, he only received scholarship offers from two Power Five schools, Louisville and Illinois. He committed to Louisville in August of 2017, and he played in Week 1 of the 2018 season as a true freshman.

His father, Chatarius Atwell Sr., played football at the University of Minnesota. If it weren’t for games being canceled due to Covid-19, Tutu would have had a shot at breaking his father’s career-record of 2,640 receiving yards. He came up 337 yards short of his father. If you consider the fact that his father also played four seasons and a total of 13 more games, Atwell’s production at Louisville becomes even more impressive.

Atwell’s size is going to get him moved off of some team’s boards. The success rate of player’s under 170 pounds in the NFL isn’t the greatest, and it takes a specific skill or unique talent to make you overcome that. Atwell’s skill is his speed. When he runs at the Louisville Pro Day, he has a chance to put up some of the best numbers in the class. As long as the medicals check out, some team will take a chance on that athleticism.

He played all 12 games during his freshman season, and he started 11 of 13 during his sophomore campaign before starting every game in his junior year. On 139 receptions, he averaged over 16 yards per reception, including averaging 18.4 yards per reception during his breakout year as a sophomore. If it weren’t for a quiet junior season, he would likely have a lot more conversation surrounding him.

During that big sophomore season, he likely wished to play with a more spread offense because his numbers could have been even more eye-popping. He caught 69 balls for a school-record 1272 receiving yards and 11 touchdowns. He also added nine carries for 33 yards on the ground. I’ll also add that he threw a pass for 33 yards and a score the same night he broke that single-season receiving record.

Atwell finished ninth in school history in career receiving yards. He was one of just two players that played in only three seasons, and he was one of two that caught fewer than 150 passes while getting into this top ten. Atwell’s big-play ability will be coveted in the NFL because he has something you can’t teach, which is raw speed. His size will move him down boards, but that speed will keep him in the conversation.

This play isn’t fair for the defender, and, in the right scheme at the next level, Atwell will be able to make it with regularity. He just takes a quick step forward before heading for the boundary, and he has all the speed in the world to get to the pylon before the defender. Atwell will never win with size or physicality, but he uses his speed to constantly put him in great decisions to make plays.

Atwell doesn’t catch either one of these balls, but you can’t really blame him. If the ball is put out in front of him on the first play, he’s gone for an easy score. On the second play, again, he sprints right past the defender for what should be a walk-in touchdown, but the quarterback throws it just at the edge of his reach where he can’t quite come down with it. You can’t teach the speed Atwell has, and NFL teams are going to watch him blow past opponents on plays like these and want to get him in their locker room.

When your quarterback gets out of the pocket, you have to work to get open for them. Atwell knows how to do that, and he does it on this play. He’s open on the back end, but his QB doesn’t see it. Once he sees him in trouble, he works across the field with him to give him a spot to throw.
After he’s in the zone, he settles down and completes the catch. That’s a skill that some players take time to develop. The quarterback will want you involved in the offense, given the ability to find the open spot in the defense.

This play, along with the second one we looked at, is the way that Atwell is going to be able to last in the NFL. The majority of teams are using pre-snap motion on just about every play to help their quarterback understand what type of coverage the defense is in. Louisville sends Atwell in motion for the end around, and he takes the snap before having the speed to outrun the defense to the edge. While he won’t be taking the end around on every play, being comfortable operating in that role will be a valuable skill to offenses.

More than likely, Atwell is going to be taken no earlier than the third round. His speed will keep him on draft boards, but his size is going to be a big issue for some teams. The top part of this receiver class is not as strong as last year, but after that, the rest of the class is quite deep, where teams will be looking for the specific style of player in the mid to late rounds. If you’re looking for a speedster that can take the top off of defenses along with providing some pre-snap motion, Atwell is the guy. It will be interesting to see his role at the next level because the landing spot could be the difference between him being a one-trick pony that is exclusively used on go routes or the player that sees 5-10 touches per game at multiple levels of the field.

Are you a member of the Nerd Herd? One of the features of the Nerd Herd is the Dynasty Prospect Film Room where you can check out game film cut ups of the incoming rookie class including Tutu Atwell.