Christian Barmore was a rising tide for the Crimson Tide in 2020. How does he project as an NFL defensive tackle? @DynastyOasis examines the best combination of length and burst amongst a shallow 2021 DT class. 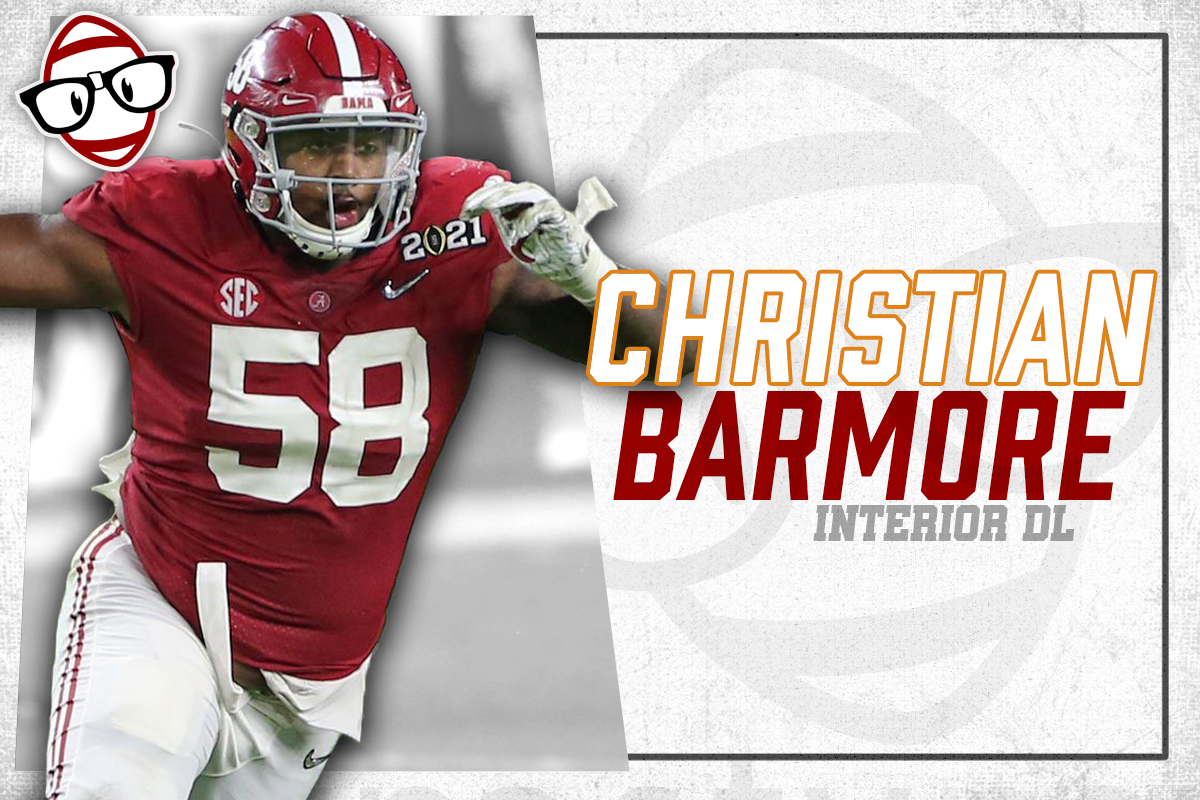 Rated a 4-star prospect by 247Sports coming out of Pennsylvania, defensive tackle Christian Barmore was recruited by most SEC powerhouses, eventually deciding to head to Tuscaloosa. As with most recruits at Alabama, he spent his first season redshirting in 2018.

In 2019, Barmore flashed potential but primarily served in a rotational role for Alabama. Like a 310-pound snowball rolling down a mountain, Christian Barmore’s 2020 season continually gained inertia. Slowed initially by a nagging knee injury, once fully healthy, Barmore was a key cog for an Alabama team that eventually won the National Championship. His two best performances came in Alabama’s last two regular-season games. Barmore combined for 8 tackles, 2 for tackles for loss, and a half-sack in those games.

After playing but not starting or contributing against Texas A&M, Barmore put himself on NFL radars by destroying the Ole Miss offensive line, as evidenced in the video above. The breakout was on. He followed this performance with another sack and forced fumble against a more robust Georgia o-line.

He would finish the season with 4 sacks in the final four games. The most impressive thing about Barmore’s ascension was that it continued to come against the improved competition.

Barmore played against o-lines chalked with future NFL talent in Notre Dame and Ohio State in the College Football Playoff. In those two games, he averaged 5 tackles, 1.5 for tackles for loss, and a sack. He was named Defensive MVP following his performance in the National Championship game. It cemented his status as a top prospect in the upcoming draft.

Possessing long arms and above-average athleticism, Barmore has the traits you look for in either a 3-4 defensive end or a 4-3 defensive tackle. However, the traits don’t always match the characteristics of him. Without further delay, let’s dive into his film.

While he may be the most disruptive upfield defender in a limited DT rookie class, there are still some holes in his game. What limitations exist in Barmore’s game? Can he be an impactful IDP asset?

Despite the raw size and length, Barmore moves exceptionally well. He has an excellent lower-body explosion, the burst to get upfield, and the lateral agility to move sideline to sideline. This foot speed and quickness allow him to beat the interior lineman to the point of attack regularly.

Lacking elite raw power, Barmore occasionally will give ground against the run to gain space from his blocker, where his long arms and ability to lock out and shed defenders become possible. In these instances, his footwork shines brightest. Slow feet don’t eat, and Barmore doesn’t miss many meals.

Barmore mirrors talented Notre Dame sophomore RB Kyren Williams from hash-to-hash in this play. Oh, and he does this all while knocking NFL draft prospect Tommy Kraemer three yards into the backfield. He does slightly overrun the ball, but his length and lateral agility still allow him to make the tackle.

Barmore is a nightmare to block with one lineman. He has defensive end length and burst, with defensive tackle power. Using an assortment of long-arm, push-pull, and swim moves, he sheds blocks with relative ease.

Watch here as he overwhelms the Georgia center and strollers him into the QB. Despite Barmore being illegally tackled on this rush, he has the presence of mind to extend an arm and dislodge the ball.

Here is a perfect example of Barmore using his length. He gives himself ample room to control the right guard in front of him. Once Barmore locks those pythons for arms, it’s over. Find the ball carrier, wrap and tackle—a textbook example of his length overwhelming shorter interior blockers.

Because of the upfield explosion he possesses, Barmore, at times, can get caught shooting a gap and allowing a big cutback lane. This attacking style is a feature of Barmore’s game, not a bug. He may be given even more freedom at the next level, especially within nickel and sub-packages. That would allow him to utilize this rare trait to the best of his abilities. However, regardless of the defensive scheme, Barmore will need to more consistently hold up against double teams and “two-gap” techniques at the NFL level.

There are four plays shown above, and all occurred on the same drive. I chose to show them all to demonstrate Barmore incorrectly and correctly applying these techniques.

Play one (snap at 14:53) and three (13:42) are examples of Barmore’s tendency to get too far upfield and out of position. Plays two (14:30) and four (13:23) are prime examples of the correct way to maintain leverage until the running back shows you the hole. That allows him to shed a block and make the tackle. Patience and consistency in this area will be necessary to jump from a premier SEC defender to an All-Pro NFL defender.

Defensive tackles aren’t necessarily highly valued assets in IDP. Even in well-balanced scoring settings, like #IDP123, interior defenders rarely score at the same rate as their DE and EDGE counterparts. Despite being the highest-rated DT in a down 2021 class, I don’t expect him to be the player to break this mold.

Still, Barmore has the markers of a productive player at the next level. He projects to a 6+ sack per year interior player who can be a disruptive force for the players around him. Team fit will be important, and he will be best utilized as a 3-technique within a 4-3 defense. Player comparisons are dangerous, but if Barmore maximizes his talent, versatile Kansas City Chief defensive lineman Chris Jones is the type of player he could become.

NFL teams won’t forget Barmore on draft night. Despite his gradual slide-down mock drafts, he’s a player that’s NFL-ready for 2021. I anticipate his name called late on day one or early on day two. It would be best if you didn’t forget him either. Target your tacklers and sack specialists first in IDP dynasty leagues. Don’t be discouraged if you leave with the most disruptive DT in the latter parts of your draft.

That’s all for now. Dive head first into rookie prospecting with a #NerdHerd membership. For the price of a cup of coffee a month, you’ll get access to the Prospect Film Room, the best #Rankins in the business, and the revolutionary #DynastyGM tool. For more prospect breakdowns, check out the 2021 Rookie Profiles from our excellent #NerdsStaff!

Alvin Kamara is a sell in Dynasty
Building a Dynasty Vol. 2: Importance of a Workhorse Running Back