Chuba Hubbard lit the dynasty world on fire in 2019. 2020 saw a fall from grace. How should you value this explosive RB heading into your dynasty drafts. 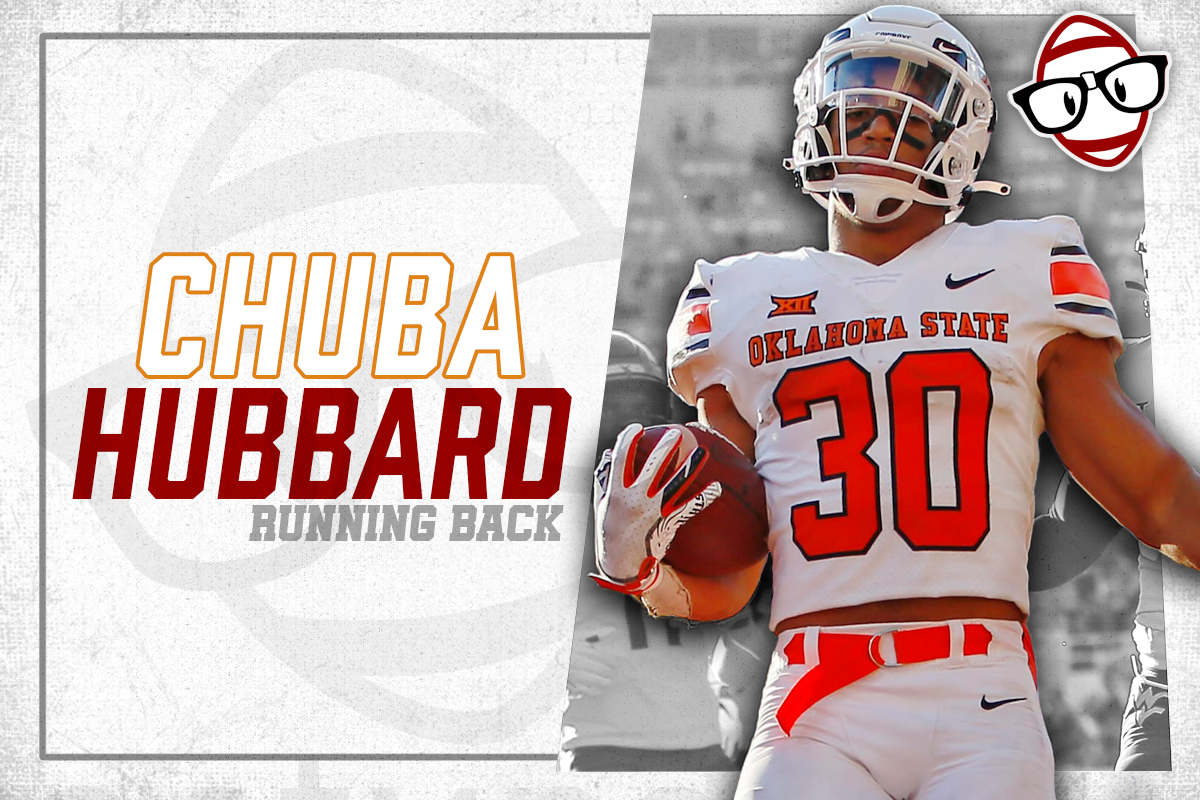 It is safe to say that the 2021 running-back class is a noticeably weaker group than we saw in 2020. As the rookie hype begins to grow, I think it is important to revisit some of the names that could have been a part of last year’s class. Specifically those we didn’t get to see a full season out of due to COVID. One of the most exciting players in 2019 that didn’t make quite the same splash in 2020 is Chuba Hubbard.

Throughout his college career, Hubbard averaged nearly 5.9 yards per carry and accumulated 36 total touchdowns. His 2019 breakout campaign saw him light college football on fire. Hubbard scored 21 touchdowns, piling up 2,292 all-purpose yards and adding 23 receptions. He saw his efficiency dip in 2020, seeing his yards per carry fall below six for the first time in his college career (4.7), rushing for 625 yards and five touchdowns in seven games played.

Chuba’s return for the 2020 season proved to be the wrong move for his draft stock. Unfortunately for Hubbard, his stock has dipped. He now is probably the biggest faller among the running-backs that returned to college last season. That being said, Hubbard still has some traits that can help him to distinguish himself at the next level.

When it comes to pure SPEED, Chuba may stand alone at the top of this running back class. As a former track star, Hubbard is always a cut away from taking it to the house on every play. If he is allowed to get a step, his speed helps him break the first tackle, although this is not always the case with Chuba.

Hubbard also shows the PATIENCE to wait for holes to be created and constantly attacks them with incredible BURST. He also does an excellent job of not allowing his patience to force him to go east to west too often, helping avoid negative plays.

As mentioned earlier, Chuba can break the first tackle if he is allowed to gain a quick step on defenders, but his ability to BREAK TACKLES is definitely an area of his game he needs to improve. His contact balance when facing stronger competition was inconsistent.

Hubbard’s Pass Catching is not something NFL teams will be able to rely on. He looked uncomfortable when used in this part of the game at Oklahoma State. Focus drops seemed to be an issue for him even during his breakout campaign in 2019.

When it comes to his struggles as a Pass Blocker, Hubbard is not alone in this running-back class. He shows the lack of power as a runner and as a blocker, hardly being able to slow down pass rushers of any level.

Chuba has some explosive big play ability that will make him an exciting option to those who like to see impressive combine numbers. But when it comes to becoming an impact player at the next level, I have to see more. One of the hardest things for players in the Big 12 jumping to the NFL is seeing defenses that are much faster and more technically proficient when it comes to limiting space and tackling. This will be Hubbard’s most significant obstacle to success. While his vision is not a weakness, he was the benefactor of enormous holes to run through. When given space, he can use his speed to pull away from defenders. He reminds me a lot of CJ Spiller, and I think his ceiling in the NFL is some version of what we have seen from Raheem Mostert in San Francisco.

When it comes to his fantasy value Chuba looks like he could be the upside part of a committee backfield. Being one of the more landing spot dependent backs in this class Hubbard will most likely fall between rookie draft picks 2.02-2.08 in 12 team leagues.