In a rookie class lacking size, CJ Marable is one of several pass-catching RBs who could offer value for PPR managers. @DynastyOasis examines the Chanticleers’ star RB’s film and draft profile. 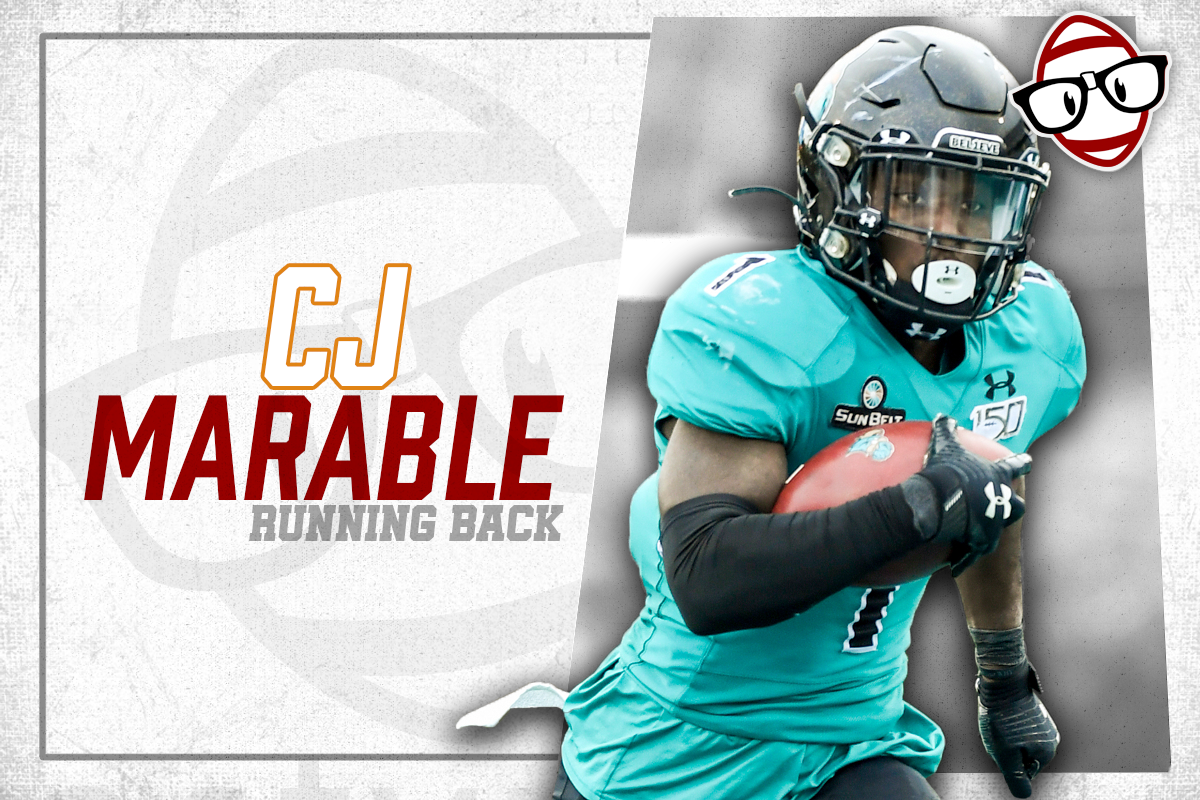 The Coastal Carolina Chanticleers had an unheralded season where they finished with an 11-1 record, and finished 14th in the final Associated Press ranking. Still, many of the players involved in this legendary season will be underdogs. That includes one of the most impactful players on the field and the Chanticleers’ emotional leader, running back CJ Marable.

Marable had an unconventional path leading him to Coastal Carolina. Although his recruitment went slowly as a two-star recruit from Georgia, Marable still had several division one offers. Marable’s most significant offer came from Arkansas State, one of the Chanticleers competitors in the Sun Belt Conference. However, things fell through in a shocking turn of events. During an interview with NFL Draft Blitz’s Alex Khvatov in 2020, Marable cited ACT issues and a lack of communication for his eventual transfer to Presbyterian University in Clinton, SC.

As a freshman at Presbyterian, Marable compiled 1,253 all-purpose yards and led the Big South Conference with 1,038 yards rushing. Following his dominant freshman season, Presbyterian informed its football team that they would no longer offer incoming players scholarships. That news combined with the transfer of current-Indianapolis Colts cornerback Rock Ya-Sin to Temple, and Marable elected to transfer to Coastal Carolina early in 2018.

As a 3-year starter for the Chanticleers, Marable compiled impressive numbers. He scored 41 touchdowns in that time, which currently ranks fourth in the school’s history. Marable also managed to have 84 career receptions. That includes a 32-game streak of catching at least one pass.
Let’s begin the dive into Marable’s film already.

Let’s Get Into it Already

At 24 years old and undersized, there are concerns related to Marable’s upside at the NFL level. Not to mention, he attended a smaller school and played against weaker competition. Let’s see if his film’s impressive enough to overcome some historical red flags at the NFL level.

A considerable portion of the carries went to Marable in 2019 and 2020. These came primarily in a variation of the speed option that starts in spread formations. Included below are plays that highlight Marable’s burst, maneuverability, and contact balance. It’s tough to make any declarations on vision and patience within this role. However, we can still observe movement traits. Even though Marable is given ample space to gather himself, some tools should have us excited.

Marable uses a jump cut to get through initial contact and finishes this run in his patented pinballing style.

In the clip above, initial contact comes at the 20 yard-line roughly. However, Marable uses his balance and leg drive to carry the ball and defenders to the 28 yard-line. He’ll rarely run over defenders and can’t push piles. Yet, he’s not easily knocked over when defenders try to tackle him.

While limited examples exist, we can find instances of Marable asked to run more NFL-relevant concepts at Coastal Carolina. Run-Pass-Option (RPO) concepts have seen increased usage in the NFL recently. Despite lacking size, Marable’s slashing style makes him a perfect fit for these schemes. In the clips below, Marable exhibits why he’s an excellent fit for the RPO.

Here, he uses a subtle cutback to get to the open hole, and then breaks a pair of tackles.

Marable sees the hole a second late in another clip but makes a superb reactionary cut at the line of scrimmage. The acceleration shown here is his best trait. However, Marable does show his potential lack of breakaway speed.

This is the area of Marable’s game that is the most refined. It also should translate to the NFL level the fastest. Marable had 69 receptions in his final two seasons at Coastal Carolina along with a 93rd percentile College Target Share according to PlayerProfiler.com. Marable will be able to help an NFL team right away in a pass-catching role.

The route here isn’t an exciting thing to watch. The opposing LB bit too aggressively on the play-action fake and could never catch back up. However, Marable makes this uncomfortable over the outside shoulder catch look routine.

Here’s another catch Marable makes effortlessly. His loose hips help him stay balanced as he’s rotating because of this errant throw. After hauling in the ball, Marable gets upfield with purpose. He weaves his way through traffic to get a chunk gain.

That’s a play that specifically made me worry about ball security with Marable. The footballs carried well away from his body in this clip. Although Marable had no fumbles in three years for the Chanticleers, it’ll be a technique he’ll want to clean up at the next level.

Here we see a sharp arrow route and excellent concentration to maintain control through contact.

Again, CJ shows those oily hips and maintains balance while catching a ball low and away.

For an undersized runner who rarely pushes piles, Marable was the most efficient goal-line runner for Coastal Carolina in the past two seasons. At that time, he scored 23 TDs.Check out the video below to see why that was the case.

Marable presses his primary read until the last moment, then makes an instinctual cut. Once he saw the painted area, he couldn’t/wouldn’t be stopped.

I had plenty of struggles finding tape on Marable. The clip below is one of the few I could find. It contains the most glaring example of Marable’s blocking limitations. He gets driven backward seven yards on this play. At least he picked up the incoming defender this time, as I often saw missed assignments in pass protection. These came on play-action, especially. Marable doesn’t need to just get better at recognizing defenses and picking up blitzes. He also needs to get stronger to prevent being bullied like this by NFL defenders.

It’s also worth noting that Marable didn’t protect very often. Typically, on passing downs, he was running a route, an area of his game where he is far more capable. That won’t fly at the NFL level. We’ve seen plenty of examples of his potential third-down pass-catching value, but he’ll need to begin building a pass-protection repertoire early on if he’s going to find success.

It’s always difficult to fall in love with a player’s tape, their story of ascension, and yet be forced to gravitate back to reality. In my Marable film study, I found a player who consistently answered what was asked of him. He offers a pass-catching skillset and adds value to special teams units immediately. Marable was a leader, two-year captain, and the primary engine of one of the best stories in college football during 2020.

Still, as a dynasty manager, it’s impossible to overlook the lack of upside in Marable. Let’s leave the age concerns aside momentarily. Based on the tape, measurables, and production profile Marable is a pick in the fourth round or later. It’s also just as likely that he ends up undrafted. That makes him a low-end prospect for fantasy.

Regarding the age, with the truncated nature of NFL RBs, a team may not see his age as a problem. As dynasty managers, we need to. Even if Marable managed to be successful early in his career, he’d likely be without the benefit of high draft capital. Thus, it’ll take time for the fantasy community to elevate Marable’s value compared to his production.

This value gap shouldn’t necessarily prohibit anyone from drafting Marable in the fourth or fifth round of dynasty rookie drafts. However, the hope would be that he settles in just the right home. That role would be as a pass-catching specialist. If that were the case, Marable could provide flex and RB4 value to fantasy lineups.

However, rookie drafting and roster management are finding players who can gain value. Marable is severely limited in this aspect as it pertains to dynasty leagues. In a relatively pedestrian 2021 RB class, Marable is currently my 16th ranked RB. That ranking has a higher likelihood of falling than it does rising as we near the 2021 NFL Draft.

Dig deeper into rookie prospects with a #NerdHerd membership. For the price of a cup of coffee a month, you’ll get access to the Prospect Film Room, the best #Rankins in the business, and the revolutionary #DynastyGM tool. For more prospect breakdowns, check out the 2021 Rookie Profiles from our excellent #NerdsStaff!