Gage Bridgford (@GbridgfordNFL) looks at one of the sleeper wide receivers in this year’s draft in Clemson’s Cornell Powell. 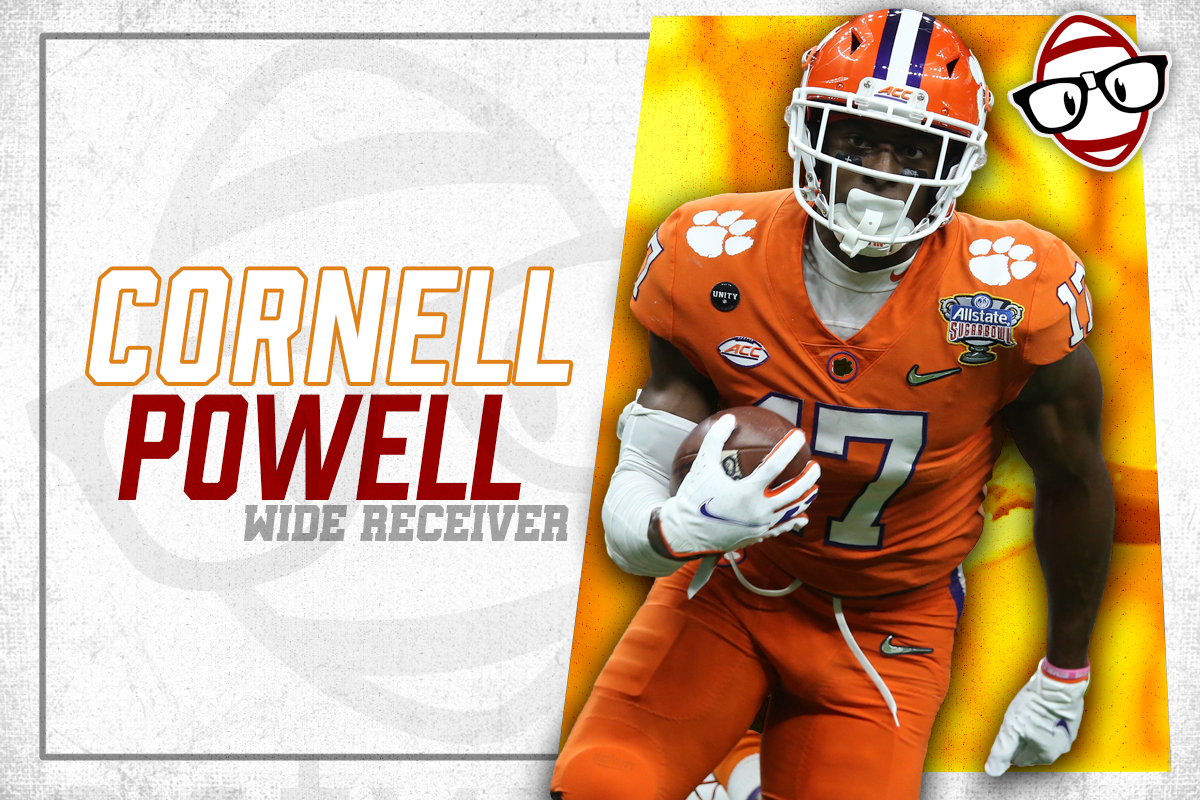 It took him five years and the remainder of the Clemson Tigers’ wide receivers graduating or getting injured for him to find his role. Still, Cornell Powell was finally able to show signs of being the 4-star wide receiver out of J.H. Rose High School in North Carolina. He was the fourth overall wide receiver in his recruiting class, ahead of guys like A.J. Brown, Michael Pittman Jr., and a player named DeKaylin “D.K.” Metcalf.

In high school, it took Powell just one year to demonstrate his skills. After recording 278 receiving yards as a freshman, Powell recorded over 1200 yards in each of the next two seasons. He compiled 1500 receiving yards as a senior and had 2,913 yards from scrimmage and 38 touchdowns.

During his first four seasons at Clemson, he played in 27 games and recorded 40 receptions for 329 yards and three touchdowns. It looked like Powell was headed for a quiet college career. However, after an injury to Justyn Ross, Powell moved into the No. 2 spot, and he thrived with 53 receptions for 882 yards and seven touchdowns in 12 games. If anyone questions Powell’s determination, show them his year-by-year stat line.

Powell will have to convince NFL teams that it just took him getting a more prominent role to produce. A few of the guys ahead of him at Clemson included Tee Higgins, Justyn Ross, Hunter Renfrow, and Mike Williams. Once that crew of wideouts was out of the way, it was down to him and Amari Rodgers to lead the charge, and they were still one of the best offenses in the country.

Powell was tied for the team lead with seven receiving touchdowns while averaging a career-high 16.6 yards per reception. While Rodgers was operating on many screens and routes close to the scrimmage line, Powell was taking the coverage further down the field. He’s not a downfield receiver, but that was the role he was filling in this offense.

He finished in the top five in the ACC in receiving yards and touchdowns during that final season. The argument against him will be that he wasn’t able to beat out the receivers ahead of him to get onto the field. However, when you’re going against the talent he had ahead of him, it was an uphill battle that he fought through to show that production during his final year. He more than doubled his marks in every area, and it couldn’t have come at a better time.

Powell getting more than three yards on this play is impressive in itself. Nearly scoring on this play is even more impressive. At least five different defenders get a hand on him on this play, and another one may have as well. Powell’s ability to run after the catch isn’t entirely on the level of his teammate Amari Rodgers. Here he shows that he can be a good fit with the modern NFL’s usage of wide receiver screens.

Powell isn’t a raw speed burner that will blow past opposing corners, but he does have a little bit of zip to him. If he wasn’t held on this play, there’s no telling just how much space he would have been able to create. Despite the holding call, he keeps his focus up to secure the catch, and he nearly scores. Powell’s strength at the catch point and focus with the ball approaching him is fantastic.

Powell cannot gain the yardage on this play due to being called for illegal touching, and he might have gotten away with a little push-off. WHO CARES!? Powell’s ability to contort his body while managing to get a foot down inbounds is just stupid. If you only watched Powell’s film against Pitt, you would expect him to be one of the top receivers in the class with some of the plays he makes.

Everything about this play is comical. Powell starts by just watching, which draws in the defender. Once he gets too close, Powell goes towards the sideline to gain a step. The best skill that Powell displays is waiting to flash his hands until the last second to keep the defender guessing. His hands are great and demonstrate patience; it makes it impossible for the cornerback to know when to put a hand up to try and break up the pass.

Powell’s play at the next level is going to be interesting to watch. There were times where he flashed the ability to be a team’s top option, but it didn’t come until late in his college career. He shows the play-making skills to get drafted at some point on Day 3. It’s going to be vital for him to maintain that competitive attitude to win a roster spot. Unless you’re playing in a deep rookie draft, you shouldn’t have to take Powell any earlier than the late fourth or early fifth round.

Join the Nerd Herd and get access to the Dynasty Prospects Film Room for just $2.99/month. There is no better way to prep for your draft than the film room, #NerdHerd podcast, and the rookie rankings.