A preferred walk-on to NFL Draft prospect, Dax Milne is a potential late round steal with high upside. 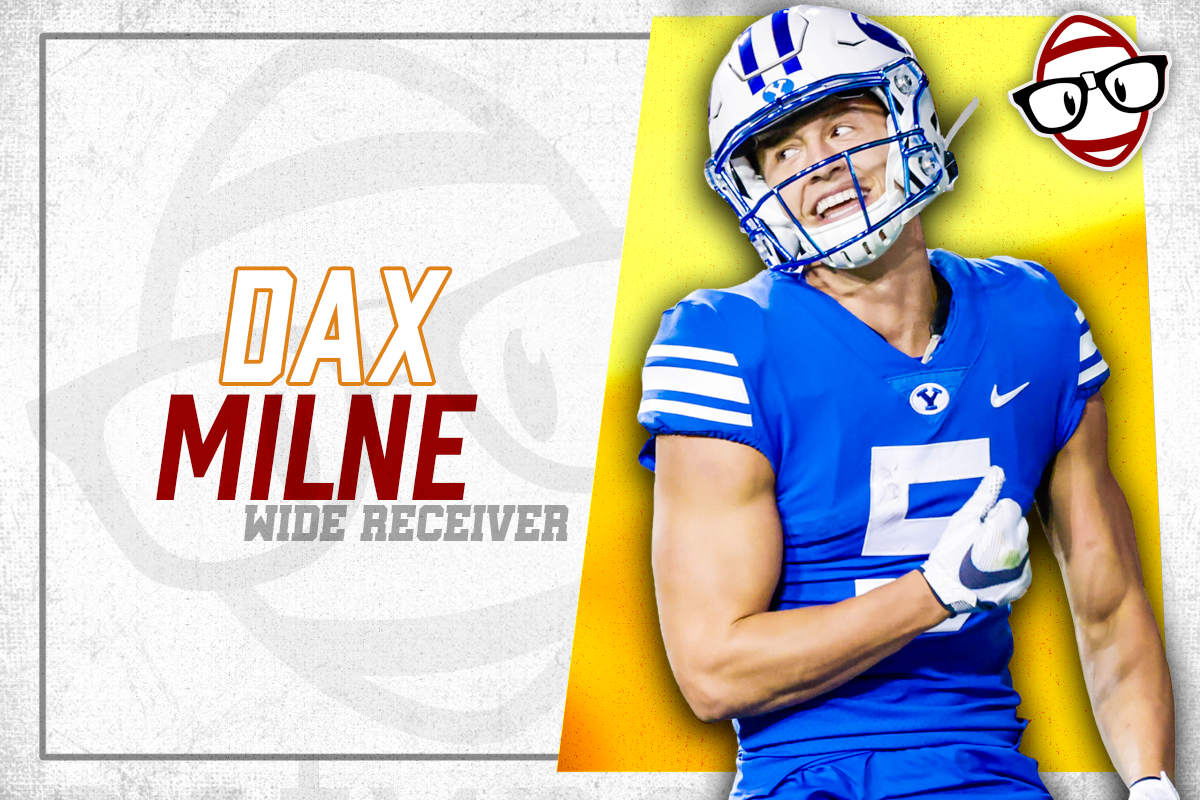 Milne Bets on Self, Walks on to BYU Program

Dax Milne was the Male Athlete of the Year at Bingham (UT) High School in 2017 as a state championship football and basketball program member. What seemed unfortunate at the time was the lack of buzz around the 2-star prospect, according to 247sports. As a result, Milne only received scholarship offers to Air Force, Army, and local FCS programs Weber State and Southern Utah. Subsequently, he joined Brigham Young University (BYU) as a preferred walk-on. The Cougars are thankful for his production on the field and his efforts to lobby quarterback Zach Wilson to de-commit from Boise State.

Milne intended on playing his senior season with the Cougars. But a conversation with Running Backs Coach Harvey Unga sparked the idea that becoming an NFL player could be a reality. In addition, Milne ended up posting the fifth-best receiving season in BYU history which would be difficult to repeat without his friend and star quarterback.

“About halfway through the season (Coach Unga) asked me if I had started to think about the NFL stuff…because ‘I have had multiple scouts ask about you,’” recalled Milne during a January interview with BYU Sports Nation. “I wanted to ride this momentum of the great season we had right into the NFL. I feel like this would be my best shot to do it.”

We all know Zach Wilson’s talented arm. But who was catching these passes? In the 2020 season, it was Milne leading the Cougars with 70 receptions and 1,188 yards.

Is Milne just a product of Wilson’s talent? Not entirely. Since this pair have known each other since fifth grade and have been on-and-off teammates since junior high school, it would be fair to believe it. Moreover, having a top-tier NFL quarterback prospect throwing passes is tremendously helpful. But Milne certainly aided his signal-caller with several up-for-grab catches amid imperfect throws. To this end, his biggest strength is an essential trait for a wideout.

Milne’s hands are top tier within this draft class. NFL Network’s Daniel Jeremiah via Twitter said he “has incredibly strong hands.” To illustrate this point, this insignificant in the grand scheme 6-yard catch against Houston made the crowd audibly gasp.

Here he is as a junior catching touchdowns in a win over USC and a highlight grab against South Florida.

Milne is a vacuum who rarely drops the ball. According to Christian Williams per PFF, he dropped less than three percent of his targets during the 2020 season. The only other NFL draft-eligible players to accomplish the same with 73 or more targets—Elijah Moore, DeVonta Smith, and Kadarius Toney.

The above videos show tough catches with a pair having defenders all over him. There are many clips of Milne starting out wide (unfortunately outside of the camera frame), appearing as if he was unguarded based on the separation upon the catch. In conclusion, it turns out his route running ability was the culprit to create the distance for uncontested catches.

Milne gets defenders off balance with his quick cuts and does it with ease. He sticks his foot in the ground, and as a result, leaves defenders often chasing after him. Also, Milne’s quickness off the line of scrimmage gets him the advantage early in routes and makes up for the one major flaw in his draft evaluation.

It will be a rare occurrence for Milne to beat any of his fellow wide receivers in a foot race. As a result I have not seen any film outracing anyone to the pylon or running away from defenders in the open field. He is a volume receiver who will secure possession. Milne is excellent at getting open and catching. However, he lacks a second gear after the catch.

I came away impressed with the tape on Dax Milne, specifically regarding his hands. Of course, any team can utilize a solid route runner with exceptional hands, quick feet, and decent size. However, his chances of getting drafted by posting a 40-yard time anywhere in the 4.6-second range would dramatically improve.

Isaiah Ford, the 2017 seventh-round draft pick of the Miami Dolphins, reminds me of Milne. Great hands, similar size, and not afraid of contact to make tough catches in traffic. Ford clocked 4.61 seconds in the 40-yard dash at the NFL Combine, and I am taking the over on Milne’s time.

The best-case scenario would be an early day three draft selection to whichever team drafts Zach Wilson. Above all, Milne’s talent is exclusive to Wilson, but the trust and rapport are there. If Milne does go undrafted, he would be a priority free agent in a similar fashion to his preferred walk-on days at BYU. Based on depth charts before the start of free agency, I think Milne would be battling for third or fourth position on the depth chart for, at minimum, the New York Giants, Detroit Lions, and Arizona Cardinals.

In conclusion, Dax Milne will likely not be fantasy relevant or on most fantasy big boards. He will be an excellent practice squad target with special teams his quickest route to seeing NFL action. Nevertheless, Milne is an NFL-caliber wide receiver and will get his chance if he continues as a reliable target. To this end, I will be keeping an eye on Milne during day three of the NFL draft and monitoring his progress throughout his rookie season.