A dynamic, dual-threat playmaker with upside. @sportsguyscott evaluates whether UCLA’s Demetric Felton is a risk worth taking. 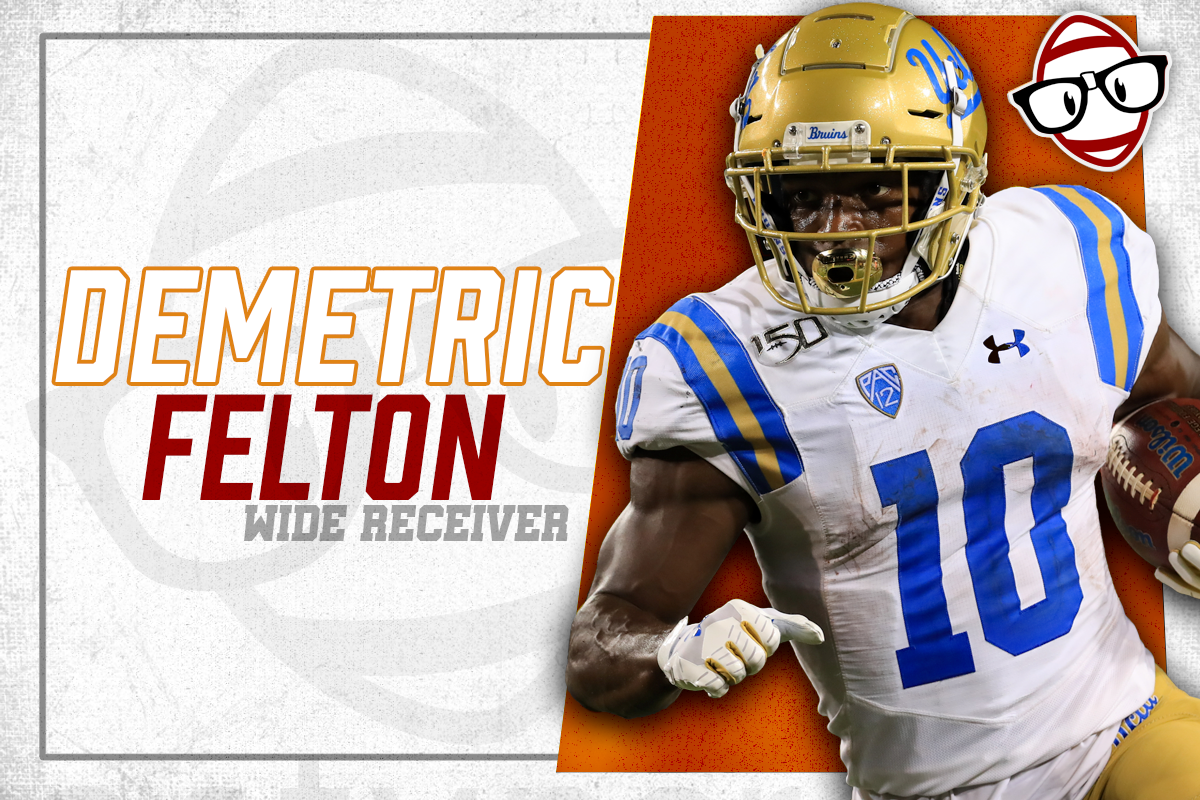 Demetric Felton was a 3-star running back prospect offered by half of the Pac-12 Conference coming out of Great Oak High School in southern California. He ultimately chose the UCLA Bruins, citing remaining close to home and family as a significant factor. Felton broke through during his redshirt junior campaign in 2019, primarily at wideout. He also spelled current Los Angeles Charger running back Joshua Kelley on the Bruin depth chart. Despite a shortened 2020 season, his performance as the lead Bruin back and a Senior Bowl tape full of highlights have forced many to reevaluate his potential at the next level.

Felton’s versatility from the backfield and out wide makes him an intriguing offensive option. During his junior season, he showcased his pass-catching talent with 55 receptions while Kelley logged the bulk of the carries. As a senior, he shouldered most of the running back carries, averaging 22 rush attempts per game. Felton featured on kick returns providing yet another path to getting more playing time.

The most important ability is availability, and Felton missed only one contest due to injury in four seasons with the Bruins. In his six games as a senior, he racked up at least 100 scrimmage yards or found the endzone in all six and achieved both marks in four of those contests.

Versus Washington State in 2019, he went for seven catches, 150 yards, and two scores. He also added a kick return touchdown in a 67-63 victory over the Cougars.

The 2020 All-Pac-12 Second Team selection racked up more than 800 yards and eight touchdowns in just six games as a senior. Listed at 5-foot-10 and 200 pounds, Felton can make a highlight reel move in open space against would-be tacklers. I would argue Felton makes defenders whiff nearly as often as he does break tackles.

Felton has demonstrated his ability to separate against defensive backs with double moves. An offense that can creatively find ways to get Felton the ball in open space should expect a big play from the speedy dual-threat weapon. This was on full display during the Reese’s Senior Bowl.

The southern California native lists Tavon Austin as his favorite athlete on his college roster bio page. I do see many similarities in their strengths. Over the first four seasons of Austin’s career, his best by far, he averaged about 75 touches (45 catches), 640 scrimmage yards, and five touchdowns per season. That is a solid target for Felton, hoping his utilization would increase sooner and greater than his predecessor.

More recent NFL success with dual-threat players like Curtis Samuel has shown tremendous value. Lynn Bowden potentially carving out a niche with the Dolphins is a current, comparable risk versus reward player. I believe the potential is there for a solid WR3 or fringe WR2 type player. Any extra fantasy points from rushing yards and touchdowns are a bonus.

There is no doubt Felton showed success at running back for the Bruins. Still, I do not see more than occasional usage as a running back in the traditional sense in the NFL. This is largely due to his size at (no bigger than) 5-foot-10 and 200 pounds. He is not a fit for every team with his skillset. Felton’s landing spot in the NFL Draft will paint a clearer picture of his upside’s immediacy.

It is challenging to talk negatives during a performance about someone who rushed for over 200 yards. Felton does his damage outside, and everyone knows it. This shows that if Felton is in the backfield, defenses can key on him running outside the tackle. Too often, he first looks to bounce instead of taking what is in front of him.

This year’s NFL Draft looks to include a deep and talented class of wide receivers. I imagine a role for Felton playing mostly in the slot and taking the occasional handoff. A rookie season where he may get mostly special teams action as a returner, depending on the depth chart. In year three, Felton could be the second receiving option and a player who is targeted in hopes of hitting a big play.

There is a spot for the Felton’s of the world, and I think this will lead to him sneaking into day two of the NFL Draft or an early day three pick. An ideal landing spot would be with the Green Bay Packers at pick 93 to go along with Davante Adams. Felton could provide another option for the running game with Aaron Jones and Jamaal Williams, both set to be unrestricted free agents (UFA). Interestingly Curtis Samuel has been discussed in signing with the Packers, and maybe the Panthers grab Felton at pick 104 with his potential departure.

Felton is landing spot and scheme dependent on being considered a fantasy starter. He could be a spot starter in your fantasy lineups as a rookie if you are looking for a boom option to win a week. I would rather have him on my squad than regret not taking a swing on him.

With that said, I am keeping in mind my colleague Keith Ensminger’s article ADP versus Draft Round on wide receivers drafted outside of the fourth round in the NFL Draft and their fantasy production. There are the outliers like 2020 performances from Darnell Mooney and Gabriel Davis, but you will need to weigh the risk for reward. Felton is right on that cusp between a late third and early fourth-rounder, and his landing spot will weigh heavily on my decision of when to grab him.

I see Felton starting to get snatched around pick no. 30 if he goes to one of the aforementioned premier landing spots in fantasy rookie drafts. The later rounds in fantasy drafts are about opportunity, scheme, and location. The better these are for Felton, the higher up my big board he will rise. I grade Felton between picks 35 to 40 with the willingness to draft and stash.