Need an RB flyer late in rookie drafts? Tired of hearing about 5’8″, 180 pound, pass-catching profiles? Deon Jackson is a H-W-S prototype who isn’t yet on most dynasty manager’s radars. Let’s check out the tape! 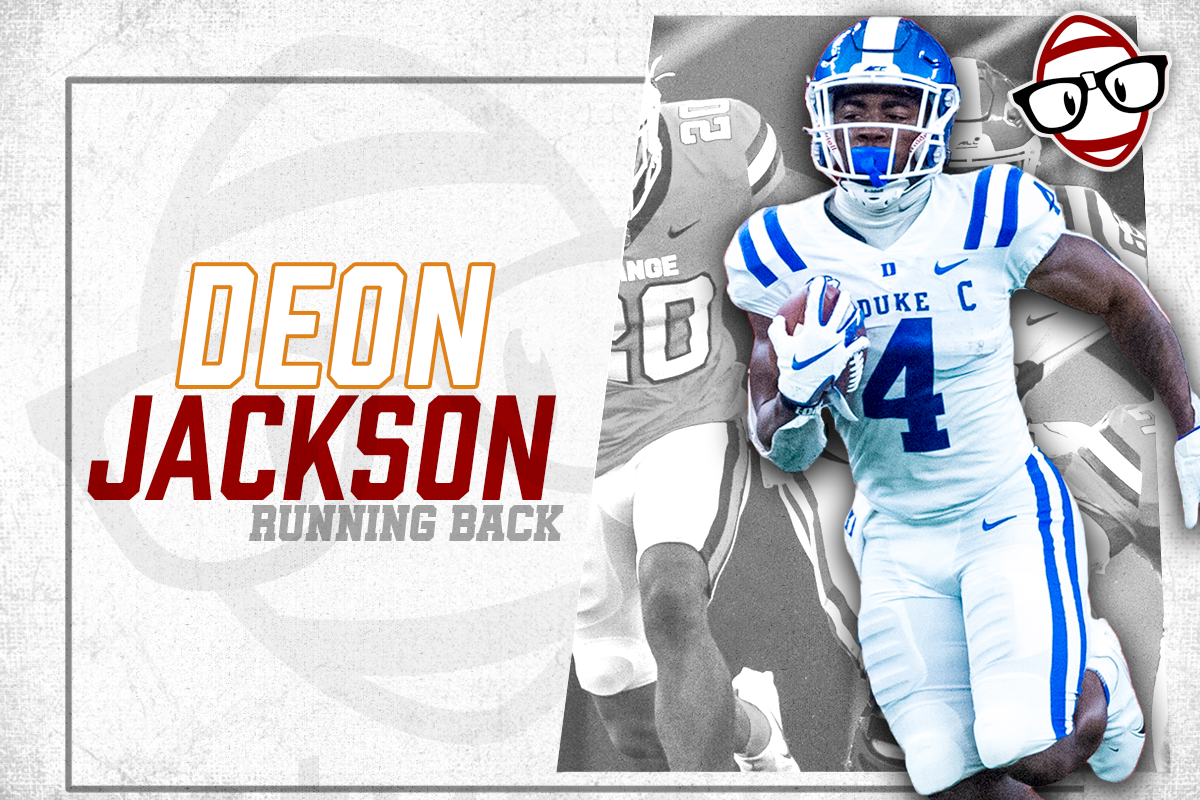 Deon Jackson was rated as a 3-star recruit by 247Sports. Hailing from Pace Academy in Atlanta, GA, Jackson ascended late in the recruiting process.  He dazzled in his Senior HS season, compiling 1,138 rushing yards and 18 touchdowns for Pace.

Recruited by Wisconsin, Virginia Tech, and Maryland (among others), Jackson eventually settled on Duke.  Jackson cited academic importance as the deciding factor in declaring to enroll at Duke.

Once on campus in Durham, Jackson served as a backup in his freshman season.  He won the starting role as a true sophomore. In 2018 Jackson was the top option for a Duke offense led by eventual No.6 overall pick, Daniel Jones.  He compiled 1,100 scrimmage yards for the Blue Devils on 161 rushing attempts and 26 receptions.

Unfortunately, that would be Deon Jackson’s best statistical season.  After posting a respectable 5.3 YPC average as a sophomore, Jackson’s final two seasons at Duke saw a drop below 4.0 YPC on 333 total attempts.  Additionally, he never was able to recapture the passing game production highlighted with Jones.  He would finish 2020 with only ten receptions for 85 yards.

Some of Jackson’s production fall-off deserves additional context beyond Daniel Jones’ departure.  Mateo Durant, an explosive runner in his own right, ascended to starter status as a sophomore in 2019.  Durant seems a more natural fit in the slow mesh point, wide zone running scheme employed most recently by head coach David Cutcliffe.  While Jackson was named a captain in 2020, he was the less suited east-west runner in a committee approach.

While his sophomore campaign did put Jackson on NFL radars, his junior and senior lackluster seasons left him without a formal NFL Combine invitation.  Despite the cancelation of that event, this is a critical component to keep in mind when evaluating Jackson. He destroyed his Duke pro-day, running 4.42 in the 40-yard dash and testing above average in the jump events.  However, the lack of a Combine invite means that NFL evaluators hadn’t been highly valuing him.  Perhaps these testing scores will drive scouts back to the film, as they did for me.  Let’s jump right into the tape of a prototype H-W-S runner coming at a tremendous value in dynasty drafts.

Deon Jackson is not well suited to run outside zone and stretch concepts.  As mentioned earlier, this was a significant component of the Duke offense.  However, he was the far better runner between the tackles.  Jackson has exceptional initial burst to find creases and the straight-line speed to churn big plays when working north and south.  While the Duke offensive line struggled to create these creases consistently, the 2020 Syracuse game best displayed Jackson’s big-play ability.

A simple zone concept (shown above).  Excellent job by Jackson of pressing the hole and getting No.31 to commit outside.  After getting through the initial alley, you see some of the contact balance expected of a bigger back.

Again, just a simple inside zone concept (shown above).  However, in this instance, you get a chance to see Jackson’s 4.42 speed on display.  While he cannot beat the final defender, the burst shown here through the line of scrimmage jumps off the screen.  Ifeatu Melifonwu (No.2), a draft-eligible CB,  barely tracks him down with a 5-yard head start.

Finally, here is (above) a chance to see Jackson use his vision and patience on a split-zone play near the goal line.  Deon uses his eyes and feet to manipulate the defender (No.4) to commit outside.  He then sorts through the traffic well and finishes falling forward, traits consistently found within Jackson’s film.

While Jackson has the dynamic linear explosion perfectly suited for inside-zone concepts, he also can follow and set up blocks within power and trap concepts.  He lacks the raw horsepower and leg drive to push a rugby pile or mow over defenders, but his balance and lower body strength allow him to absorb contact.  These skills, combined with reliable patience and vision, make him effective within these power-based concepts.

Duke runs a trap play here (above), pulling the right guard and tackle.  Credit Notre Dame’s linebackers for forcing this run back to the inside. Still, Deon finds the A-gap running lane and breaks two tackles on his way to a first down.  Again, Jackson isn’t the most violent big back but consistently finds yards after contact.

Another power concept (above) and Jackson settles in nicely behind his blockers.  Two hesitation steps allow Jackson to slip into the hole created by the pulling lineman.  A fantastic final hesitation and juke leave the safety grasping at air.  It’s a shame Jackson couldn’t land the stiff arm to complete what is already an impressive run.

While the pass-catching production fell off in the latter stages of Jackson’s time at Duke, he proved an effective pass protector.  Duke was average as a run-blocking unit, but the offensive line was not well equipped to protect the passer in 2020.  Jackson regularly picked up free blitzing defenders or helped an underperforming line with chip blocks and double teams.

Play-action concepts are effective at creating space and matchups for playmakers downfield.  However, against the wrong blitz packages, play-action can create difficult angles for running backs in pass protection.  Deon Jackson is an experienced RB who understands this reality.  Watch (above) as he identifies the free rusher without needing a QB audible.  QB Chase Brice carries out the play fake, clearly expecting Jackson to be there.  Deon, however, is backside saving his QB from being decapitated by Notre Dame’s fearsome backer, Jeremiah Owusu-Koramoah.  These recognition skills are valued by NFL evaluators and will be necessary to get Jackson on the field early in his career.

As has been mentioned repeatedly throughout this tape study, Jackson does not perform well when asked to start runs east and west.  While he certainly has the raw speed to gain the edge, he does not have the lateral agility to bend runs around the edge.  Additionally, when asked to run these stretch concepts, he too often would look to reverse field.  Whether presented with a running lane or not, completely stopping and changing direction isn’t advisable for even the most athletic runners.

Pitch play (shown above) is poorly blocked and destroyed by instant penetration.  However, Deon does have a chance to dive forward at the edge and only lose a yard or two.  Instead, this bad habit of reversing field appears again. Not only does he lose an additional 4-yards, but he also now must endure a Seminole hog pile.  Sometimes losing one yard is a good play.

As previously mentioned, Jackson was not one of the five Blue Devils extended an invitation to attend the NFL Combine in 2021.  While I see this as an oversight on the NFL’s part, it does indicate on some level a lack of interest in Jackson.  His pro-day performance may have forced NFL teams to take a second look at Deon. However, we shouldn’t be expecting a substantial investment from an NFL team on draft weekend.

My expectation, even my hope, is that he is an undrafted free agent.   While I think he offers some scheme versatility and therefore could excel in differing and sub-optimal situations, I’d prefer to see him pick his future NFL team.  He will best succeed in power or inside-zone schemes.

A pair of NFC West teams intrigue me most when projecting a best-case scenario.  Kliff Kingsbury’s inside zone concepts from spread alignments perfectly fit Jackson’s skill-set.  The Seattle Seahawks are perpetually looking for cheap, physical runners late in drafts.  Additionally, Chicago, Atlanta, Pittsburgh, and Denver are likely in the market for depth and future talent at the RB spot.

The 2021 rookie RB class features several impactful players at the top.  However, beyond the three consensually valued rushers (Najee Harris, Travis Etienne, and Javonte Williams), we have a class that appears to be lacking depth.  Additionally, the RB depth that is most often presented as the “next best” option lacks prototypical size.

When taking a birds-eye view at this rookie RB class, my instincts are to fade the RB4 pick.  The best macro advice I can give to dynasty managers with rosters lacking running backs or the early first round picks needed to secure a premier RB talent is to remain patient.  2021 is not the year to force the issue.

It would be best if you instead turned your focus onto stockpiling rookie picks in the third round and beyond. From this range in your rookie draft, you can target multiple rookie profiles like Deon Jackson’s. While you likely will miss out on the RB4, I do not see an enormous distinction between RB4 and RB14 this year.

Conveniently, I have Deon Jackson listed as my RB14 in this class, a ranking that is only restrained by a perceived lack of NFL interest. Hypothetically, if the NFL draft capital were significantly better than expected, or Jackson finds a preferred landing spot as a UDFA, his stock could soar as a rookie. In any case, he is a player with the size, athleticism, tape, and production markers that indicate a potentially impactful fantasy producer.

Thanks for reading! Want to dive deeper into this 2021 Rookie class? There’s no better way than with a #NerdHerd membership. Jump into the Prospect Film Room and get access to the best #Rankins in the business. For more prospect breakdowns, check out the 2021 Rookie Profiles from our excellent #NerdsStaff!

Cornerstone: Is A.J. Brown a must have for 2021 Fantasy Football
Five Guys: Tight Ends with the Most Riding on Draft Day